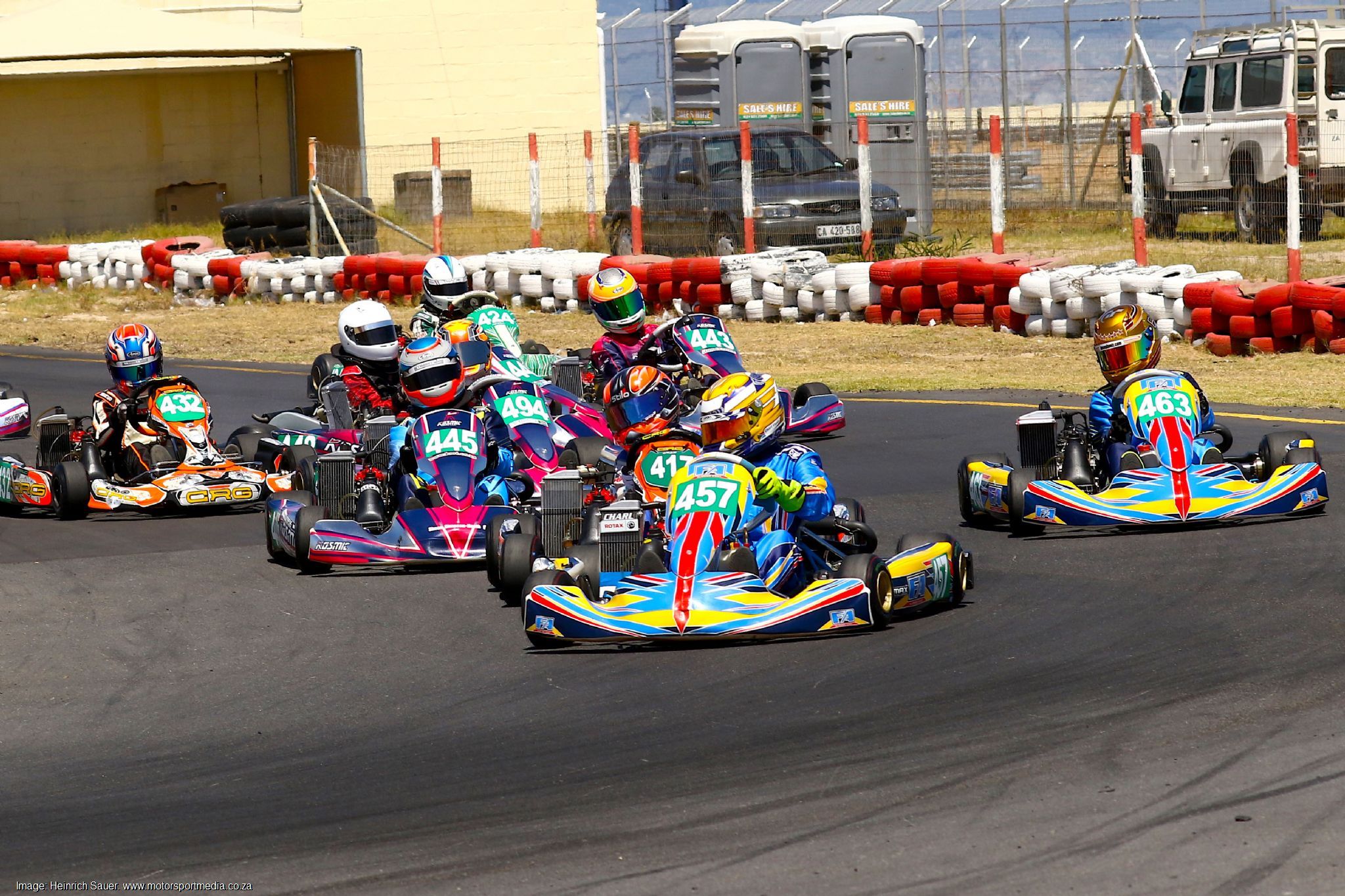 One of the exceptions was however the premier Rotax DD2 class, where reigning WP champion Umpie Swart (EMR Extreme CRG) stamped his authority on the racing to emerge a dominant triple-winner over his rookie teammate Jason Coetzee, Jonathan Thomas (Partners Hair CRG), visiting local Formula 3 hero Jonathan Aberdein honing his racing skills on another CRG, Sebastian Boyd and Jarryd Evans. Gary Lennon meanwhile emerged victorious in the Masters class with two wins to Conor Hughes’ one with Ernst Viljoen third.

Junior Max was however where most of the drama unfolded after triple-winner for the day Charl Visser was excluded for a technical issue in his kart to leave rookie quintet to fight it out for the win. WP Mini Max champion Joseph Oelz (FA Kart) eventually took a debut victory in the high school class with two race wins win and a third place over fellow rookie race 2 winner, SA Maxterino champion Tate Bishop (TPB Kosmic), Sibo Solomon, Kai van Zijl (unlimited Auto CRG), double second-place man Troy Dolinschek and Simon Simpson-Heath, after a tough day of racing amongst a sizeable 14-kart field.

SAKRA’s joy flowed over in the under-11 Micro Max class, where another Academy kid, 2017 African Open winner Reese Koorzen (SAKRA Kosmic) stormed to a triple win over Reza Levy (MonstaPop CRG) with a fierce battle for third eventually going the way of Joshua Smit over Ethan Stier, Paul Malcolm and a heroic performance by little Mishca Williams. Mischa overcame the double trauma of having her tonsils out and her home being robbed in the week before the race to not only jump back in a kart, but bring it home sixth in that tough 11-kart field.

Little Eric Norman was delighted to wrest the baby under-8 Cadet class trophy on Saturday evening with two race wins after fighting it out all day with race 2 winner Ian Joubert. Luan Mostert ended up third from Rayan Karriem and karting first timer Aaron Gallietti after all the karting kindergarten kids had to also deal with a late specification change on Saturday.

But perhaps the most interesting and dramatic races on Saturday went down in the Cape Clubmans races, where Worcester farmer Johan Hamman (Hammanshof Kosmic) returned to dominate after several years away. It was not all that easy in the end as Andrew Thomas (Blake Bros) was leading the finale before being thumped from behind into a monster accident to bring out the red flag, but Hamman eventually came home the winner for the day ahead of Robert Peche, Andre Steenkamp, Thomas, Chris Vrettos and Terry Watt.

The second round of the Cape karting championships follow in thee weeks with another round at Killarney Saturday 3 March.