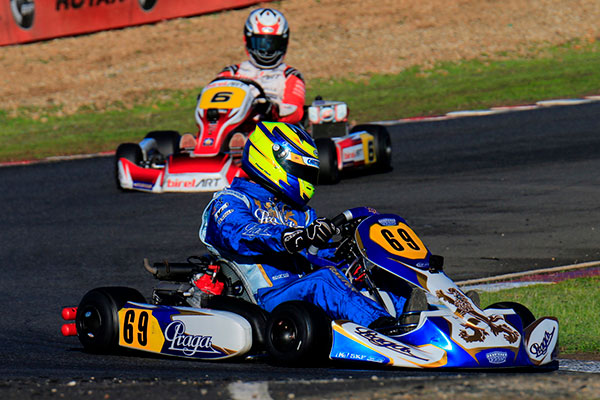 Palmerston North karter Fraser Hart has added the Victorian State Rotax DD2 Masters class championship title to his CV after a dominant on track performance in freezing conditions at the fourth round of Australia’s 2019 Rotax Pro Tour series at Puckapunyal in rural Victoria on Sunday.

“You know it’s cold when the Kiwis say it is warmer at home,” said photographer Gordon Cooper on Monday.

Cold it was too with temperatures hovering round the 0 degrees C mark each morning and remaining in single figures for all but the middle part of the day.

Not something the Kiwis are exactly unused to, though veteran Hart was the only one of the 10 resident New Zealand drivers who made the trip to stand on the top step of the podium.

After setting the fifth quickest lap time in qualifying then finishing 6th in the first heat race Hart then finished 2nd in the second, third and fourth Rotax DD2 Masters class heats before winning both the Pre-Final and the Final.

Aucklander Bond Roby (6th Rotax DD2) and Hamilton driver Clay Osborne (6th Rotax Junior) ended up with the best finishes of the other eight resident Kiwis who made the trip.

Roby qualified 6th quickest and had a best heat race finish of 5th before finishing 7th in his Pre-Final and 6th in his Final.

A nose cone displacement penalty in his Final, meanwhile, which put him back to 6th, disguised the front-running pace Clay Osborne showed in qualifying (P3) and the Junior Rotax heats (2nd in Ht 1) and Pre-Final (3rd).

Aucklander Josh Richmond was also quick in Junior Rotax, qualifying 8th and having a best heat race finish of 6th before working his way back through the field in the Final from P15 at the start to P12 at the line.

Clay Osborne’s older brother Fynn was the best of the four Kiwis who contested the Rotax Light class, finishing the Final in P11, one place ahead of Rianna O’Meara-Hunt, the latter feeling much more at home in a new chassis better suited to all the lead ballast the slightly built female teen has to run to meet the Senior class’s Minimum All-Up Weight rule.

This time O’Meara-Hunt was the second quickest of the Kiwi foursome (behind Palmerston North ace Jackson Rooney) in qualifying and after a best heat race finish of 10th worked her way from P18 at the start to P12 in the Final.

In his first Rotax Pro Tour round as a Senior Bradley Hewson also enjoyed a strong run in his Australian debut in the Rotax Light class, working his way forward from a P25 qualifying performance for a best heat race finish of 13th and meeting best P10 in the Pre-Final before finishing the Final in 16th.

For Jackson Rooney, however, the Puckapunyal round was one to forget, the hard-driving youngster having the pace but not the track position to make the most of it, with a best heat race finish of 12th but dnfs in the fourth heat and the Final.

Aucklander Sabastian Manson qualified 5th quickest in the Mini Max class, and had a best heat finish of 4th before working his way back up through the field from P14 to P10 in the Final.

The Pro Tour series now takes a mid-winter break before resuming at Warwick in Queensland for the penultimate round in early August, then a double header gala finale at Albury back in Victoria in September.