Kart racing tyres: Fact, fiction and our point of view… 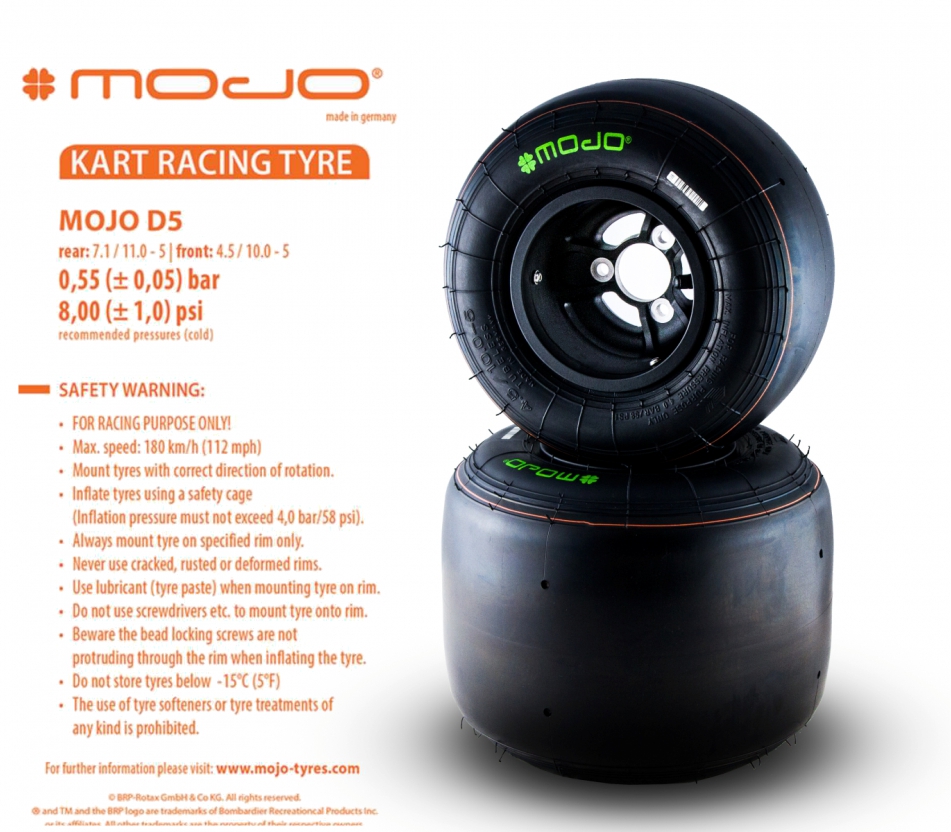 Kart racing tyres: Fact, fiction and our point of view…

Rotax entered the tyre market in 2005 with a hard compound, the durable Mojo D1 tyre for all classes to reduce the tyre costs – a very significant cost in karting. The very successful D2 followed and is still serving Junior Max and the Clubmans classes very well. The premier classes demanded higher performance tyres, thus the quest for good performance and tyre longevity – two things that often seem mutually exclusive – is the ongoing challenge.

The D3 and D4 have offered faster lap times but like any racing tyres, they need to be well understood and driven within limits to get the best performance and reasonable life from them. Watch and listen closely to Formula 1 commentary to understand just how much attention is focussed on tyres – pressures, temperatures, scrubbing in, warm up laps and so on.

Rotax have just announced the introduction D5 tyre for use in Central Europe in 2018. This might seem strange only six months after launching the D4, but the new D5 tyre has exceeded all expectations and it seems that the stiff performance and life targets set for the D5 were met much sooner than anticipated!

Why launch the D5 in Central Europe first?

Rotax has a huge market worldwide so the capacity to produce tyres to supply everyone immediately would not be possible. Central Europe was chosen as the most critical market – every respectable tyre manufacturer is represented in Europe and with several inter-regional series like the Euro Trophy, the BNL Series etc are contested by mainly European competitors so these European countries will be the first to change so that they race on the same tyres at “home”.

We will test the D5 tyre against the D4 (as well as several other competitive brands) in South Africa shortly and if we are pleased with the results, we will schedule a change to this for the Senior classes. Note that tyre production must first be scheduled, tyres manufactured, boxes loaded in a container and then sent by sea freight to Durban. Once released in Durban it comes by road to our warehouse in Edenvale.

Competitors are always suspicious that someone else gets a better “batch” or fresher tyres than them. This is a valid concern but often completely misunderstood concept.

Tyres today are very rigorously produced with stringent quality control every step of the way. The quality control system of the German manufacturer starts at the producers of the various chemicals, compounds, casing materials etc and each step in the production is carefully monitored to maintain a consistent standard.  Production runs can be very long so it is not a question of mixing a small batch of material and making a few tyres – very large quantities are produced. The serial number (bar code on the sidewalls) is attached during production and this is used to track the completed tyre.

The aging process is critical and probably what has given birth to the idea of “batches” being good or bad. In reality, from the end of vulcanizing (heating/melting of the rubber in the mould) an aging process begins and the tyre surface continues to cure (getting harder). This process is very rapid in the first three weeks. No tyres are delivered before the three-week curing process has completed to avoid anyone getting excessively soft tyres. After this initial period, the curing continues at a vastly reduced rate but the bottom line is that the older the tyre, the harder (and slower) it gets.

Mojo scan in and record each tyre as it is boxed at the factory into their database and ensures that all the boxes going to a distributor are tyres manufactured in the same period. This is very important because we have large quantities of tyres sent to us by sea freight to keep tyre costs down. The beauty of the Mojo tyre scanning system is that we can scan the tyres at any time to ensure that they are from the correct “batch” and that these are tyres destined for use in South Africa – no other country’s tyres are allowed to be used. That way everyone will be on the same tyres and no one can introduce “fresher” tyres flown in from another country. Be sure that without the system clever competitors will fly fresh tyres in to gain an unfair advantage.

EMR takes great care to store the tyres in cool dark conditions at its warehouse in Edenvale but also ensures that the “first in first out” principle is applied. Tyres are scanned in at National races and checked every heat to ensure parity and to ensure no swapping between drivers or that additional tyres are being used. This system is sometimes used at regional or club races random checks are carried out to ensure fairness.

Tech talk and a bit of kart tyre history

Tyres provide the ONLY connection between your kart and the track surface. Used properly, this extremely limited contact “patch” can provide fantastic results. When one really looks at the very small contact area and factors such as bumps, vibrations and changes in camber it is absolutely unbelievable what these simple looking black “doughnuts” do for you.

Excellent literature is out there on racing tyres – the author Carol Smith comes to mind – but very briefly you have a contact area that provides a “traction circle” and there is only a limited total amount of “grip” available at any time. You can use all this available traction say under braking in a straight line but if you start turning at the same time then you use some of the available grip laterally, so you sacrifice some of the traction previously available for braking. When you accelerate exiting a corner once again you “share” the available grip between lateral and longitudinal traction and that can cause an oversteer especially in higher powered karts. Every movement of the steering wheel shifts the weight on each one of the wheels significantly influencing those critical traction circles so it is far more complex and sensitive than one would initially think.

Tyre compound, casing design, temperatures, rim materials, axle stiffness, chassis setup and a myriad of other factors affect tyre performance, but tyres are particularly sensitive to pressure and temperature so getting this right is everyone’s challenge. A good pressure gauge and keeping record is a must. Understanding that the most important thing is the correct pressure as raced (hot) is what counts and learning the relationship between the starting pressure and racing pressure is important. As most tracks are clockwise it means that the left side tyre pressures will rise more than the right.

Starting in a new class or racing on a new tyre compound should be treated with respect and all assumptions that you held about the previous class or tyre compound should be set aside for a while at least. What worked previously may not suit the new tyre and/or class so the golden rule is “when in doubt – go back to the original factory settings for your brand of kart!” Standard seat position, original axle, castor, camber settings etc and work carefully away from this is recommended.

In the early days, karting tyres were only replaced when they were worn out and few recognized the change in performance given that tyres often lasted a season. All of that changed when Goodyear (the famous American manufacturer that once dominated Indy, F1, Nascar, Drag Racing etc) produced the first “super wide” slicks for karting around 1970. Lap times tumbled with the new level of grip. Chassis development moved up a gear!

A few years later Sirio tyres emerged and gave those lucky enough to get them an edge. Then came the revolution – Bridgestone produced the first really sticky tyres and nothing has been the same ever since! I was personally exposed to this development in 1977 in Europe when I fitted my first set of Bridgestone tyres and suddenly found three seconds a lap! You could drive around the outside of people you had previously been racing with and it was as if your engine had just found 30% more power!

In this life there is seldom anything for nothing and the sticky tyres brought several new problems – very limited tyre life and extremely difficult to drive on the early day chassis with 25mm solid rear axles. The bouncing and digging in saw many injured drivers with broken ribs, torn ligaments etc.  Chassis development was very rapid to try to optimise the new-found grip.

Over the years Dunlop, Bridgestone, Vega, Sirio, MG, Continental, Yokohama, etc had their ups and downs but the tyre wars were so intense in the 1990’s that National ASN’s (like MSA) stepped in and started to limit tyre usage, eventually also designating a particular tyre and compound per class. Qualifying tyres, different tyres for short heats and then others for the long final had become the order of the day and international karting had become simply unaffordable!

Rotax’s Mojo tyre brand will continuously strive to provide competitors with parity of performance, ease of use and decent tyre life. The required level of tyre performance is determined largely by market demands but with the knowledge that it always needs to remain affordable i.e. very fast lap times but poor tyre life only suits a few competitors. High performance but with inconsistency is also not acceptable so the fine balance between performance and tyre life will always be top of mind in the ongoing development of the product. We will continue to provide the tyre scanning service unique to Mojo to ensure parity.