KARTING TO KICK OFF SA MOTORSPORT DOUBLE HEADER IN 2018 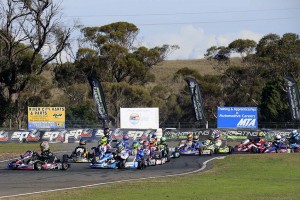 The Australian Kart Championship drivers and teams will converge on the Murray Bridge region next February (Pic: Coopers Photography)

KARTING TO KICK OFF SA MOTORSPORT DOUBLE HEADER IN 2018

More than 250 competitors and their support crews from all parts of Australia, New Zealand and Singapore will converge on the Murray Bridge region for the event.The Australian Kart Championship will begin a double header for South Australian motorsport fans when the opening round of 2018 is contested on February 23-25.

It will be the first time the Monarto Karting Complex has hosted the opening round of Australia’s most prestigious Karting Championship.

The event will be followed by South Australia’s largest sporting event, the Adelaide 500, on the subsequent weekend.

Rural City of Murray Bridge Mayor Brenton Lewis said the honour of hosting the opening round of the Australian Kart Championship for 2018 was a testament to the Monarto facility and its management.

“Over the past three years the Australian Kart Championship, and the Monarto Karting Complex in general, has provided both economic and social benefits to our Community and Region,” he said.

“With the whole State building up to the Supercars Championship kicking off the following weekend in Adelaide, we look forward to seeing the best young drivers, some of which will go on to become Supercar stars in the future, coming to compete in the region.”

It is the fourth year in succession that a round in the five-event Australian Kart Championship has been contested at the Monarto Karting Complex, much to the delight of the Go-Kart Club of South Australia President Peter Fritz.

“Hosting the first round of the Championship is an honour for the Go-Kart Club of South Australia, and one that we’re all looking forward to,” said Fritz.

“In the past we’ve set a very high standard for the events and we’ll be looking to continually improve for all of our attendees in 2018.   We pride ourselves on putting on the best event possible, to ensure both the local and visiting drivers, teams, mechanics and spectators enjoy their time in the Murray Bridge region.

“The support shown by the Murray Bridge community over the past couple of years has been tremendous and we look forward to an even bigger and better event in 2018.”