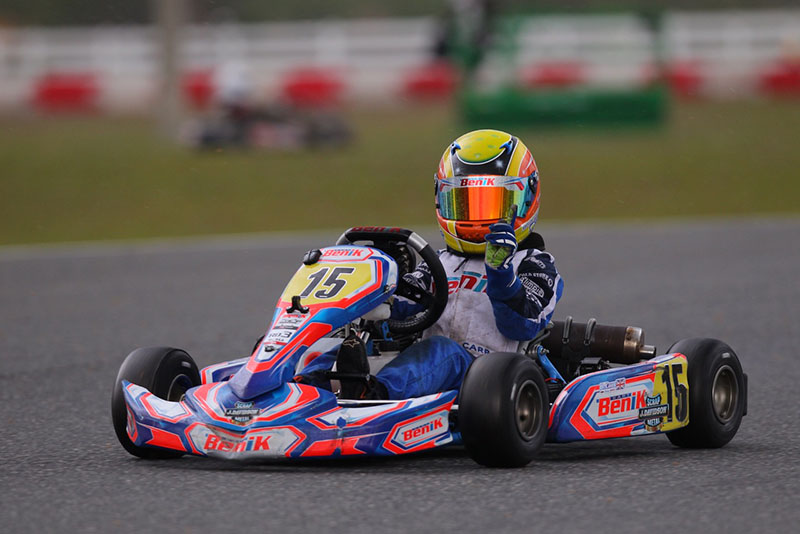 “Two championships and one win in the Florida Winter Tour finale“

Team BENIK claimed another pair of championship titles in the past two weekends at the final round of the MAXSpeed Entertainment promoted Florida Winter Tour. Taking place at the Ocala Gran Prix facility in Ocala, Florida, the team was victorious in both the ROK Cup USA and Rotax MAX Challenge programs, earning a championship at each event, as well as a win and podium finish.


BENIK drivers Brandon Carr and Miguel Costa battled in the Micro ROK category. Carr came into the finale second in the championship after a solid win in Palm Beach during the second round of the series and a bronze in Homestead back in January. Trailing his fellow BENIK Kart driver Costa, who sat in first, by less than 30 points, Carr would need a stout weekend in Ocala to take the title. A consistent set of heat races and a victory in Sunday’s main event gave Carr what he needed, and he was crowned the 2017 Vortex Micro ROK Florida Winter Tour Champion, marking it the second year in a row that BENIK blue has stood atop the Micro ROK championship point standings. Costa came home as the Vice-Champion making it another 1-2 finish for the BENIK brand.

The team looked for a repeat championship the following weekend in the Rotax portion of the event. James Egozi piloted the BENIK chassis in the Micro MAX class and had been the class of the field all series long scoring victories in both rounds one and two and went into the final round as the Micro MAX points leader. Earning a third place finish in Ocala, Egozi garnered enough points to secure the 2017 Rotax Micro MAX Florida Winter Tour Championship.

“Congratulations to both Brandon and James on their championships as well as all the other BENIK drivers claiming race wins and podium results throughout the Florida Winter Tour,” explained Nick Mitchell. “We will now shift our focus to the remainder of the 2017 season by competing at the final round of the ROK Cup USA Florida championship and the opening rounds of the United States Pro Kart Series before traveling across the country to Sonoma, California for rounds three and four in the SuperKarts! USA Pro Tour.”


With two championship titles already in the books, the BENIK team looks forward to the rest of the 2017 season. For more information on BENIK Kart, please contact Nick Mitchell or Ben Cruttenden via e-mail to Info@Benik-Kart.com or by phone at 754.206.4870.