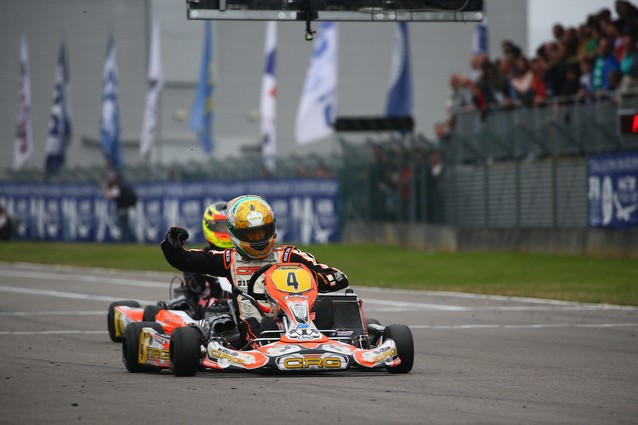 Paolo De Conto secured the KZ European Championship one round early thanks to the victory taken in Oviedo (Spain). Flavio Camponeschi has been unlucky in OK, as he had to retire when just one lap was left to go. Hugo Sasse the best in OK-Junior.

The third round of the European CIK-FIA Championship has given the victory of the KZ title to CRG and Paolo De Conto, thanks to the stunning third win in a row claimed by the Italian in Spain at the Fernando Alonso Circuit of Oviedo, success that followed the first two taken in Sarno and Genk.

Paolo De Conto secured another fair and square victory on CRG-Tm being the unquestioned protagonist of the KZ European Championship 2017 after the two wins taken in as many rounds. The Championship will end in Sweden at Kristianstad next July 30th, but the gap accumulated by Paolo De Conto is now impossible to fill by all his rivals. Three wins in three races, a stunning hat trick that rewarded the competitiveness of the whole CRG team and the technical package provided to the Italian driver. Reigning World Champion Paolo De Conto won his third European title, he was in fact victorious back in 2010 (KZ2), in 2011 (KZ1) and now in KZ.

In Oviedo, Paolo De Conto was second in qualifying, but put his name forward to the victory winning all the three qualifying heats. In the Final, after fighting initially with Iglesias, he managed the advantage built on Lammers and Kremers, that eventually joined him on the podium. The weekend of the other two CRG protagonists on CRG-Tm, namely the Pex brothers, has been a bit unlucky instead. Stan Pex was fifth, while Jorrit Pex was eighth instead.

Paolo De Conto’s satisfaction is quite clear from his words: “Everything has been working well since the first race of Sarno. In Oviedo I gave my 100% and managed to win three heats scoring some championship points, and the result in the Final provided me with the mathematical certainty of the title. The Final has been quite tough because the temperature changed, as it was cooler after the hot temps of the previous days, and it also started raining. The track was a lot more slippery. I managed the race anyway and I am really happy for the end result. Everything worked like a charm. The environment within the team is great. We will now focus on the World Championship. I would like to thank Giancarlo Tinini for the trust he put on me, TM Racing, my mechanic Bolla, Omar, and my family. If I have to dedicate this title to someone, that is gotta be CRG that allowed me to get such stunning results.”

In OK Flavio Camponeschi has been extremely unlucky on CRG-Parilla, as he had to retire one lap early due to the failure of the chain when he was deservedly holding P3 after being second and engaging in a tight fight with his main rivals. The chain failure happened as he jumped going through the closing chicane of the circuit of Oviedo, a situation common to a lot of his rivals. The stress that this difficult weekend put on the karts is quite adamant from the fact that CRG had to replace 50 axle shafts!

Flavio Camponeschi’s comment: “I am really disappointed for the problem with the chain, but I am happy for the speed we displayed. I had to stop with one lap to go due to the jump I made while going through the last chicane: I was third and chasing the second. It has been a good race, even if some hard taps made me lose contact with the leader. My race pace was very good and this is very important for the next rounds.”

The best of CRG drivers in OK has been the Dutch Glenn Van Berlo of CRG Keijzer Racing, who was fourth at the end of a good comeback race. Hannes Janker, who had been a splendid protagonist up to the Final, and Dennis Hauger had to retire due to an incident, the latter while recovering several positions. Michael Rosina was also forced to an early stop, while Kilian Meyer could not qualify for the final due to a penalty in the closing heat.

HUGO SASSE THE BEST IN OK-JUNIOR

The German Hugo Sasse of CRG TB Racing Team has been the best of the CRG lot in OK-Junior. He was fifth at the flag. The Russian Artem Kosarev of CRG Keijzer Racing was 20th and the Dutch Kas Haverkort of CRG Keijzer Racing was 23rd. The two Spanish drivers Ayrton Fontecha and Francisco Javier Sagrera had to retire due to an incident, as the Brazilian Gabriel Bortoleto who got on the podium in Sarno. The German Donar Munding could not qualify for the final, as Luca Giardelli, Mathias Torreggiani and Pietro Delli Guanti of CRG Keijzer