CRG, FIRST VICTORIES FOR JORRIT PEX AND HAUGER IN THE HEATS OF WSK 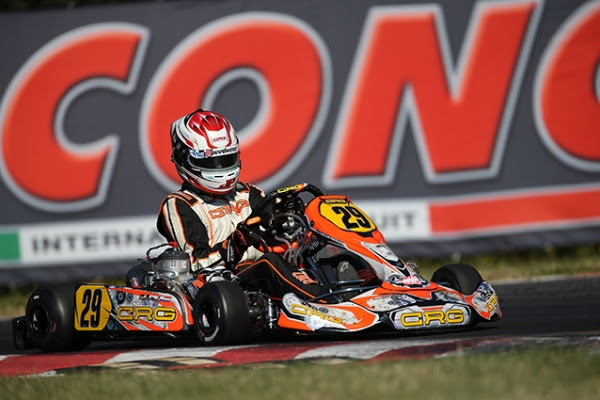 CRG started the third round of the WSK Super Master Series in La Conca on the right foot. The Italian outfit put in great results in qualifying and heats mainly with Jorrit Pex in KZ2 (who took the victory in the first heat) and Dennis Hauger who properly celebrated his birthday in OK (setting the pole position and winning the first heat).

The Norwegian Dennis Hauger displayed a great shape so far in OK on CRG-Parilla. He celebrated his 14th birthday in the best possible way, being very quick in qualifying with a super-lap completed in 45.363s. Hauger has also taken a fair and square victory in the first heat of the day. Regarding the other CRG drivers, the British Callum Bradshaw was ninth in the second session and then ended the first heat in a great sixth place, leading Kilian Meyer, who was 12th after qualifying. Davide Lombardo was 13th in the heat as he built on the 15th time obtained in qualifying due to a small technical issue.


The Dutch driver of CRG Keijzer Kas Haverkort keeps putting in great performances in OK-Junior and he was third quickest in qualifying this time around in La Conca. The French Evann Mallet appeared to be in good shape after the incident in Castelletto and secured the sixth time of qualifying 2. The Brazilian Gabriel Bortoleto was 12th, the French Gillian Henrion 15th andNik Zamir Zakwan 20th. The Spanish driver Ayrton Fontecha was 14th in qualifying 1, while Jose Antonio Gomez was 22nd. Henrion recovered up to P10 in the first heat.

Heats will continue on Saturday March 18th, while Prefinals and Finals with Live TV coverage will close the programme on Sunday March 19th.


All results, Live Timing and Live TV feed will be available at www.wskarting.it