CRG KICKING OFF ITS SEASON AT THE WSK CHAMPIONS CUP 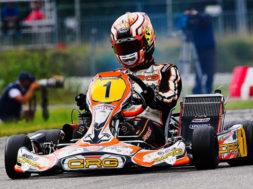 CRG KICKING OFF ITS SEASON AT THE WSK CHAMPIONS CUP

The Circuit Adria Karting Raceway will stage the first round of the WSK Champions Cup next 26-29 January 2017. CRG is all set to get on track with a strong squad in all the categories.

CRG is ready for the first challenge of the season in Adria’s opener of the WSK Champions Cup, a particularly interesting test-bench due to the high number of entered drivers: 250 racers from 33 different countries.


CRG will get to the Adria Karting Raceway with most of its new 2017 works team in the highest categories and in 60 Mini, thanks to private teams linked to the Italian outfit.

CAMPONESCHI IN KZ2 ON CRG-TM

CRG will field Flavio Camponeschi in KZ2 since the beginning of the season. This year the Italian driver will use works TM engines. Considering the great potential of Camponeschi, who has been two times European Champion in KZ (2015) and KF2 (2008) and KF1 World Champion (2012), this is definitely a debut to keep an eye on.


Pex brothers will be back on chassis powered by TM, the same engines that allowed Jorrit Pex to win the KZ World Championship in 2015. Alongside Jorrit, his younger brother Stan Pex is now ready to shine among the top players of the category.

A youngster with great potential like Alessandro Giardelli is awaited to his debut in KZ2 in his first experience with shifter karts, as is Taymour Kermanshahchi.

Among CRG private drivers, the strong German Alexander Schmitz will debut with CRG Holland alongside the Swede Andreas Johansson, while Team CRG Keijzer Racing will line up David Beckmann.

Dennis Hauger will make his debut in OK following a splendid racing career with CRG in OK-Junior last year and previously in 60 Mini with Team CRG Gamoto. The WSK Champions Cup is going to be an important debut for the young Norwegian who is about to start of a demanding season. Matteo Nannini is at his second year with CRG and will certainly benefit from the precious advice from his uncle, former F1 driver Alessandro Nannini, in his debut in OK. CRG squad for OK will also comprise the Finnish driver William Alatalo and the private driver Michael Rosina, both on CRG-Parilla.

THE YOUNG TALENTS OF OK-JUNIOR

CRG will continue to keep a careful eye on OK-Junior, with the objective of breeding the new generation of talents of international karting. Several drivers are ready to get on track in Adria among the fields of CRG and some more will join later on in the season. CRG’s lot for the WSK Champions Cup includes the Brazilian Gabriel Bortoleto, the French drivers Evann Mallet and Gillian Henrion, Malaysia’s Nik Zamir Zakwan and the Spaniards Ayrton Fontechaand José Antonio Gomez, all on CRG-Parilla.

CRG is increasing its presence also in the smallest of the WSK categories, 60 Mini, that is recording an increased participation in Adria with 106 entered drivers. CRG has scored countless victories with its satellite teams in this category. Gamoto Racing, always been on top of the category, will field the highest number of drivers. Luca Giardelli, Alfio Spina, the Australian Marcos Flack, the Malaysian Adam Putera, the Americans Akshay and Nikhil Bohra, the Asians Christian Ho and Aidan Quek and the Dutch Laurens Van Hoepen will in fact defend CRG Gamoto’s colors in Adria.

All results and Live TV feed will be available at www.wskarting.it