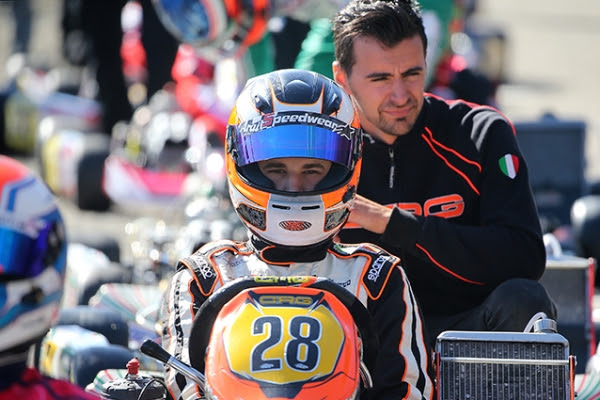 The circuit of La Conca brings WSK Super Master Series to Muro Leccese in the south of Italy for the third round of the championship. CRG works team will be present in all categories in a race that announces to be interesting also from a technical viewpoint.

CRG is all set to get on track at the International Circuit La Conca of Muro Leccese with its strongest drivers well motivated to run an attack race in categories KZ2, OK and OK-Junior. The third round of the WSK Super Master Series that will get underway on 17-19 March will have a good participation of 230 drivers at the start.


The sun is shining in Muro Leccese and this will give an occasion to finally test several technical choices after the first exits that have been spoiled by bad weather. Unfortunately, Paolo De Conto will not be present due to a snowboarding incident that left him slightly injured in his shoulder, but the KZ 2016 World Champion is certain to be back on track in occasion of the following WSK event on April 9th in Sarno.

In KZ2, CRG will be represented by Flavio Camponeschi, Simo Puhakkaand the two Pex brothers, Stan who comes from the recent podium in Castelletto and Jorrit, who scored a podium in Adria. CRG’s works team for KZ2 will also include Alessandro Giardelli, the British driver Taymour Kermanshahchi, and CRG Holland’s Andreas Johansson and Benjamin Tornqvist Persson.

In OK, expectations are high for the performance of Davide Lombardo, as well as for that of Dennis Hauger, the Spanish Kilian Meyer and 2016 Academy Champion Callum Bradshaw. The Swedish driver Alfred Nilssonwill also be present with CRG Holland.


CRG youngsters of OK-Junior have already been shining in the difficult conditions of the early season races run so far, and this makes all staff optimist ahead of this forthcoming race. CRG will field the French Gillian Henrion andEvann Mallet, the Brazilian Gabriel Bortoleto, the Spaniards Jose Antonio Gomez and Ayrton Fontecha and the Malaysian Nik Zamir Zakwan. Private teams will line up several other drivers; M2 Racing will bring on track the Spanish driver Javier Sagrera, RL-Competition Marius Zug, CRG Keijzer Racing the Dutch Kas Haverkort and Elto Racing Mathias Torreggiani.

All results, Live Timing and Live TV feed will be available at www.wskarting.it