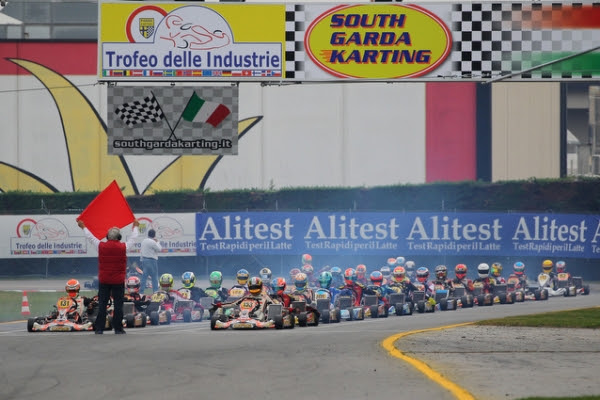 Simo Puhakka dominated the Final of the 44th Trofeo delle Industrie on CRG-Maxter run by Renda at the South Garda Karting circuit of Lonato. Riccardo Longhi also on the podium in P3, leading Andrea Dalè and Giacomo Pollini.

Another good win was scored by CRG in this season end that has already been made precious by several other wins, the most prestigious of which being the KZ World Championship secured by Jorrit Pex. This time around the Finn Simo Puhakka on CRG-Maxter run by Renda Motorsport secured the victory in a race that is part of the history of karting: the 44th Trofeo delle Industrie held at the South Garda Karting track of Lonato.

THE CRG “ARMY” OF KZ2 LED BY PUHAKKA

In Lonato, CRG private teams have been absolute protagonists of the whole KZ2 weekend, with an “army” of drivers that have been led by Simo Puhakka closing on the top step of the podium. Puhakka, 27 years old from Sastamala, has been the unquestioned dominator of the Trofeo delle Industrie’s Final on CRG-Maxter run by Renda, after being second in the Prefinal out of the more than 60 drivers that have enliven this KZ2 event.

Puhakka’s victorious run has been excellent, but a lot of other CRG drivers deserved credit for the performance they have put in. The quickest time in KZ2 qualifying of Group 1 went to Andrea Dalè (CRG-Tm), who led Fabian Federer (CRG-Maxter) and Puhakka, while Fabrizio Rosati (CRG-Maxter) was fifth. Davide Forè (CRG-Tm) posted the quickest time of Group 2, while the Spaniard Enrico Prosperi (CRG-Tm) was fourth. In Group 3, Riccardo Longhi on CRG-Tm run by Modena Kart and the Rok International winner Giacomo Pollini on CRG-Tm run by Renda, were right behind Maranello’s driver Tommaso Mosca. A total of 5 CRG drivers led by Dalè were in the top 6 of qualifying. In other words, a lot of CRG drivers were among the protagonists and all were on the front line.

Longhi and Federer were the absolute quickest in qualifying heats. Longhi kept his momentum dominating the Prefinal ahead of Puhakka, Mosca, Federer, Dalè and Pollini, which confirmed CRG domination also in the top rows of the Final’s grid. In the Final, Puhakka moved a successful attack right away and secured a good margin to his rivals. Behind the Finnish driver, the young Leonardo Lorandi on Tony Kart, but CRG’s show continued with Longhi ending on the third step of the podium, Dalè was fourth and Pollini fifth. Federer was forced to an early retirement due to the failure of his chain, while Forè recouped well up to the ninth place after starting from the back due to an incident with Bernardotto in one heat.

GOOD PERFORMANCE FOR GAMOTO AND CRG IN 60 MINI

CRG and Gamoto Racing obtained a good seventh place in 60 Mini with Adam Putera, who confirmed the growth shown lately, as did the other very young drivers on track with CRG chassis. Among the finalists, Victor Majgaard was eleventh, while Alex Kattoulas ended 13th proceeding Mathias Torreggiani, while Cenyu Han ended 17th and Bohra Nikhil 22nd.

The 60 Mini final was won by Mattia Michelotto (Energy). In KF Junior the victory went to Marta Garcia (FA Kart). The Mexican Sebastian Alvarez competed in KF Junior on CRG and ended 26th in the Final, while the Swiss Riccardo Martinello was 29th.

All results are available at www.trofeodelleindustrie.it