CRG IN SARNO FOR THE WSK CLOSER EYING THE EUROPEAN CHAMPIONSHIP 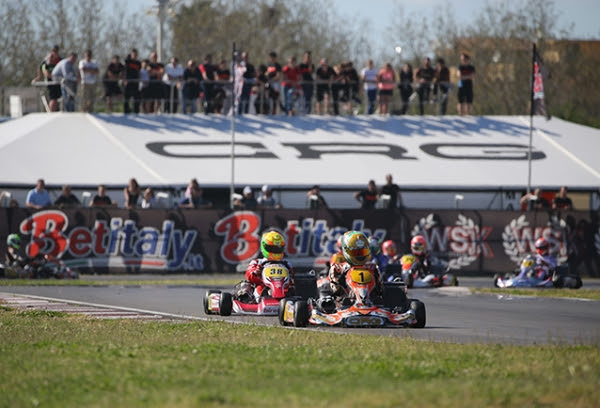 The International circuit Napoli of Sarno has staged the fourth round of the WSK Super Master and provided CRG works team with several important indications, ahead of the forthcoming CIK-FIA European Championship.

The closing round of the WSK Super Master Series ended with several unlucky racing episodes hitting CRG works team’s drivers at the International Circuit Napoli of Sarno, but the Italian outfit managed to collect very positive indications in terms of speed and performances in all categories.


The WSK round of Sarno has been particularly important eying the CIK-FIA European Championship that will kick off from Sarno in two weeks time for categories KZ, OK and OK-Junior. CRG took this weekend as a further chance to test several technical solutions.

JORRIT PEX AND DE CONTO AMONG THE QUICKEST IN KZ

The best result of CRG drivers in KZ was obtained by Jorrit Pex, who ended the Final in fifth place, while Paolo De Conto was sixth, but showed a good pace in several occasions and recovered from two issues in the heats, the spark plug cabling and the front fairing, that lost him some ground. The front fairing rule also handed Stan Pex a time penalty in Prefinal at the end of a good race that saw him crossing the finish line in fourth position. The Dutch driver recovered well in the Final, but was unfortunately stopped by an incident. Alessandro Giardelli also put in a good performance up to Prefinal, but could not make it through to the Final due to a penalty. The Dutch driver of CRG Holland Benjamin Tornqvist Persson ended the Final within the top ten in P9. Jorrit Pex was the most highly ranked CRG driver in the championship, as he ended sixth behind Lammers, Hajek, Abbasse, Iglesias and Ardigò.


The British driver Callum Bradshaw has been the most productive of CRG’s lot in OK, ending seventh at the end of a good comeback. Flavio Camponeschi was unfortunately forced to skip the final stages due to a trivial technical problem he experienced at the beginning of his Prefinal, but the Italian driver of CRG has been very quick in a category he had not been racing in for five years. He has been among the absolute quickest in qualifying heats.Camponeschi is now awaited at the International CIK-FIA races. A technical problem has also stopped the Norwegian Dennis Hauger in the Final, when he was putting in a strong race that would have made him climb higher up in the charts. A technical problem prevented the Spanish driver Kilian Meyer to qualify for the Final, as happened to Michael Rosina and to the ColombianLorenzo Alborta Paredes. The Championship was won by Novalak. CRG’sBradshaw was 17th and Hauger 18th.

STRONG RACES FOR FONTECHA AND BORTOLETO IN OK-JUNIOR

The Spanish Ayrton Fontecha put in a good performance in OK-Junior. He managed to slide in the main protagonists of the Final in a tight and exciting race, that also saw CRG’s Brazilian Gabriel Bortoleto among the leading group. In the closing stages of the race, Bortoleto unfortunately slipped down from P3, while Fontecha took a P4 that was only a tenth shy of the third place.Bortoleto closed his effort in 14th place. Among the quickest of the category, the German of CRG TB Racing Team Hugo Sasse was eighth. Luca Giardelliended a nice race with a good P12. The French Gillian Henrion was 22nd at the end of a tough weekend instead. The German Donar-Nils Munding andLuca Griggs of team Morsicani had to retire from the Final, while the Spanish driver Jose Antonio Gomez could not go beyond Prefinal. The Championship was won by Rosso, while Bortoleto was 14th and Fontecha 18th.

ANOTHER GOOD RACE FOR SPINA IN MINI


Team CRG Gamoto has been competitive once again in 60 Mini with its very young drivers. Alfio Spina could not put in the winning sprint in the closing stages of Sarno’s Final though, but he completed a strong race nevertheless.Spina had to settle for P6, leading some other protagonists of team Gamoto: namely, the Russian Miron Pingasov and the American Nikhil Bohra. The Dutch driver of EGP Racing Team Ean Eyckmans also displayed a good shape ending the Final in 12th place. Spina closed the championship in fourth place, behind Minì, Bedrin and Antonelli.