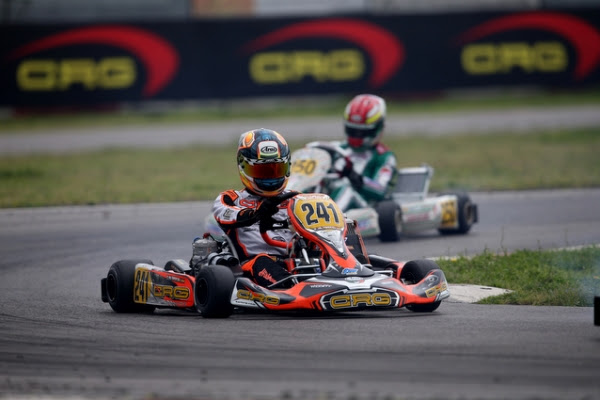 The third round of WSK Super Master Series at the International Circuit Napoli in Sarno produced an exceptional spectacle in the mark of CRG, mainly, but not only, with Pedro Hiltbrand, who was second in OK, and Gabriel Bortoleto, third in OK-Junior.

The first round of the double closing appointment of WSK Super Master Series in Sarno held on Easter day on April 1st, has been really interesting for CRG, especially in OK and OK-Junior. The same circuit will stage the first round of the European Championship on April 22nd. CRG drivers have been among the main protagonists of this CIK-FIA event, as Pedro Hiltbrand completed an exceptional comeback race from last up to the second place of the Final, while team mate Callum Bradshaw, was also a great protagonist of the weekend taking the fourth place in the Final. Kilian Meyer was also among the quickest in 13th place, while Andrea Rosso closed his effort in 17th after starting from the back of the grid. The Argentine Franco Colapinto had to retire from the Prefinal and could not express his speed as he would have wanted.

The young Brazilian of CRG Gabriel Bortoleto managed to shine again in OK-Junior taking the third place in the Final, even though this result does not match up his speed, after the pole position in quali, P1 at the end of heats and the victory in Prefinal A. Bortoleto obtained an overall good result in Sarno anyway, as he has always been among the protagonists and showed a great growth in this category. The American Tyler Maxson, Alfio Spina and the Chinese Xizheng Huang could not qualify for the final instead.

Another young emerging driver of CRG Racing Team, Alessandro Giardelli, put in yet another strong performance in the highest shifter category. He was 11th in the Final after recovering a stunning 17 places. Giardelli could have taken a lot more had he not slipped in an unlucky retirement from Prefinal after P4 in qualifying and the third place of heats. Among the other CRG drivers, Ciro Mollo was 12th, Andrea Dalè 14th and Marco Valenti 19th, while Benjamin Tornqvist had to retire from the Final after a good fourth place in Prefinal.

The next round of the season will take place in Sarno again, on April 8th, in occasion of the closer of WSK Super Masters Series.