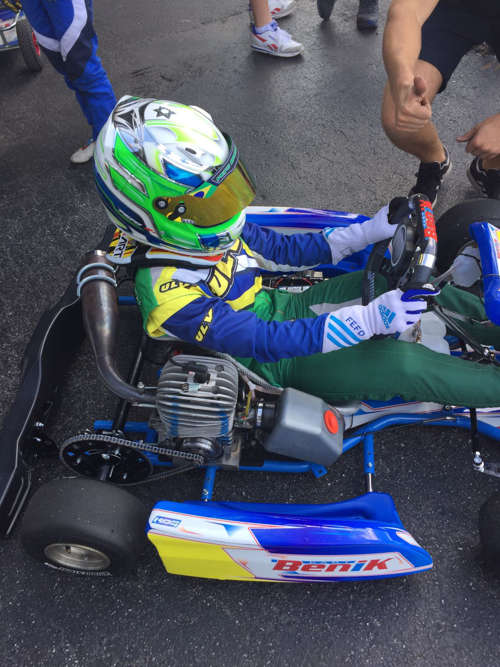 With multiple drivers already confirmed for the 2017 karting season, Team BENIK is pleased to welcome Fefo Barrichello to the Florida based program. Son of former Formula One and IndyCar driver and current Stock Car Brasil standout Rubens Barrichello, Fefo will pilot the familiar ‘Blue BENIK’ beginning next week at the 2017 MAXspeed Entertainment Florida Winter Tour.


Testing with the BENIK squad on several occasions in the past few months, Fefo showed great speed with mechanics and team management was impressed in every aspect of his abilities.

“We are extremely happy to welcome Fefo to the team,” explained BENIK Kart Co-Owner Nick Mitchell. “Racing runs in the blood in the Barrichello family and our program is the perfect match for a future star in the world of motorsports. At his recent tests, he showed that he has talent and great speed. We are confident that he will be a threat at the Florida Winter Tour.”

Fefo will see action during both the Vortex ROK and Rotax MAX weekends of the Florida Winter Tour. Piloting a BENIK in the Vortex Mini ROK class, the young pilot will then trade in his Vortex powerplant for a Rotax Mini MAX for the second weekend of the two weekend format. Fefo will also compete with Team BENIK at the 2017 SuperKarts USA (SKUSA) Pro Tour as well as select ROK Cup USA and Rotax MAX events throughout the season.


Mitchell continued, “2016 was a great season for the BENIK brand as we claimed multiple race wins and championships across North America. We are focused to continue our winning ways in 2017 and hope to help Fefo achieve success abord a BENIK chassis.”