GOOD PERFORMANCE FOR CRG WITH HAUGER IN LE MANS’ OK 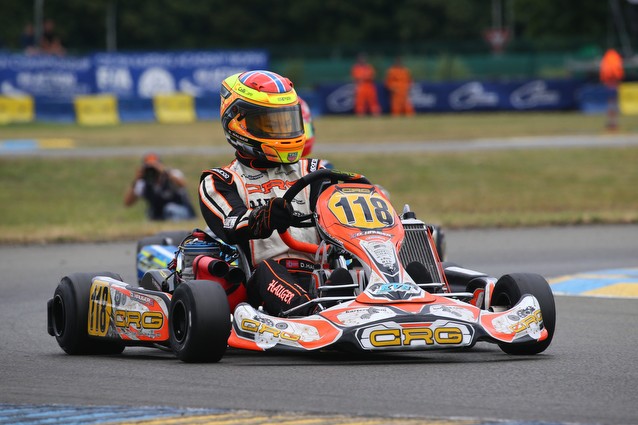 Dennis Hauger claimed P3 on CRG-Parilla in OK in Le Mans (France), but was later on demoted to a forth place, a result that definitely does not spoil his good performance.

The Final of the CIK-FIA European Championship of OK in Le Mans had a sting in the tail end, with the best CRG driver being the Norwegian Dennis Hauger that has been among the protagonists until the Final. Hauger could have taken the win, but in the end he had to settle for a podium finish, that was later on turned into a fourth position.

A one second time penalty to give P3 back to Kenneally demoted Hauger to the fourth position, a result that did not ruin the good racing weekend put in by the Norwegian driver of CRG, who secured the pole position and took the lead of the pack after heats. In the OK Final, Hauger got an early lead, but then lost a couple of places bouncing back to regain the lead, before slipping again behind. He finally clinched P3, but his overtaking move was judged too aggressive and was sanctioned with a demotion to P4. Hauger recovered some ground in the classification and now stands in ninth place, 16 points short of the leader.

In OK, Flavio Camponeschi managed to recover from the starting P17, but was involved in an incident in the closing stages of the Final when holding P7. The CRG driver unfortunately suffered speed problems throughout the weekend.

Among CRG drivers partaking in the Final, Kilian Meyer, Callum Bradshaw and Hannes Janker have been quite competitive too. Meyer secured the seventh place in the Final, Bradshaw (who won one heat) was 10th and Janker 11th. Glenn Van Berlo of CRG Keijzer Racing closed his effort in P20, while Michael Rosina was forced to the retirement.

The quickest of CRG drivers of KZ2 was Max Tubben of CRG Holland, who was eighth in the Final. Enrico Prosperi was 15th, while the other CRG Holland driver Benjamin Tornqvist was 22nd. Alessandro Giardelli could not find a place among the finalists, as he was flawlessly involved in a incident in the formation lap of the closing heat.

The Le Mans’ weekend for OK-Junior CRG drivers has been hampered by several incidents. In the end, the Brazilian Gabriel Bortoleto was 14th, Luca Giardelli 26th, Kas Haverkort of CRG Keijzer Racing was 27th due to an incident after a great qualifying. The German Donar Munding could not qualify for the Final, despite claiming a great second in one heat, and the Spanish Francisco Sagrera had a similar fate.

The final two rounds of the European Championship are scheduled for next July 23rd in Alaharma, Finland (OK and OK-Junior), as the closer will take place in Kristianstad (Sweden) on July 30th (OK, OK-Junior, KZ, KZ2).