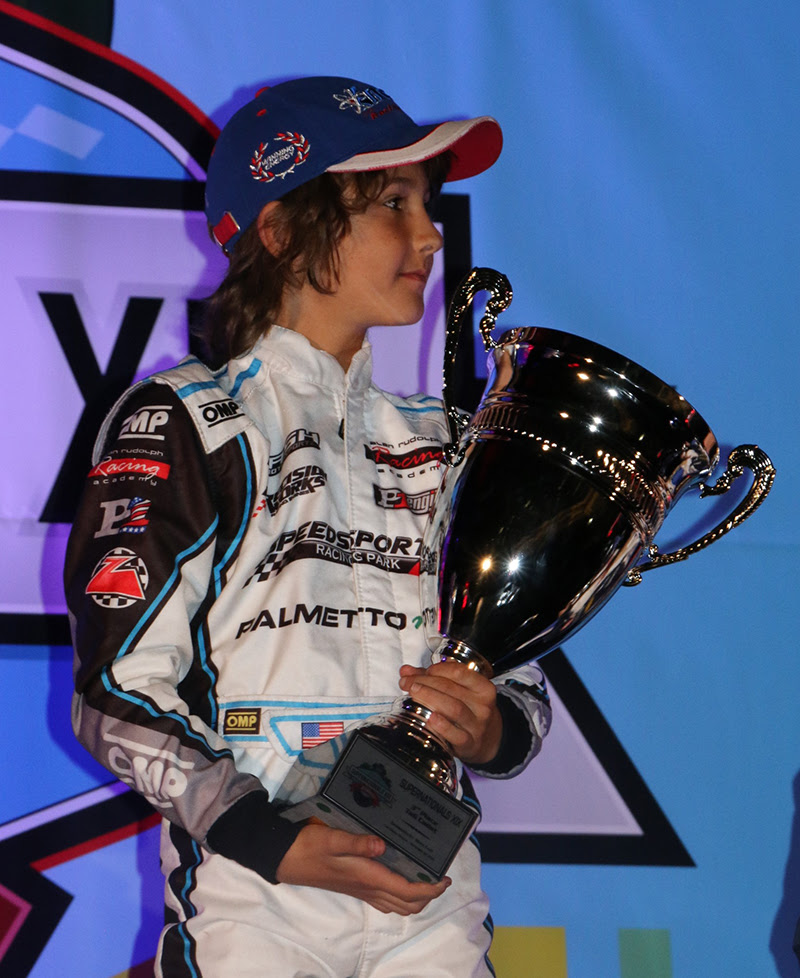 0
0   0
With two races on temporary racing circuits in less than one month in the entertainment capital of the world, Las Vegas, Nevada, Jak Crawford emerged as a newly crowned champion in one series and finished on the championship podium in another. Showing grit in both Rotax competition at the US Open of Las Vegas and the annual SuperKarts USA (SKUSA) SuperNationals, Crawford proved that he is on the fast track to motorsports stardom.

As is the case in a multiple-race, multiple-venue formats, a lot can happen over the course of a series. Jetpak Jak, the young Texan, certainly had to run the gamete of racing challenges in both series.

The US Open events in the Rotax Mini Max category saw intense competition all season with rain action in Dallas resulting in a second place podium finish for Jak, who was a rookie in the class. The second event weekend in Grand Junction, Colorado exhibited Jak’s ability to fight through heat and sickness and take what looked like an easy win that was not so easy. The finale in Las Vegas on the grounds of the Rio All-Suite Hotel and Casino was a challenge indeed as the team decided to make a chassis change before the event and despite the ability to muster only a fifth place finish, Jak was able to walk away with the championship.

Despite leading the SKUSA Pro Tour TaG Cadet Championship points coming out of the first weekend in Phoenix due to a complete sweep of the first day’s events on a day that was also Jak’s tenth birthday, Jak suffered a DNF on race day number two due to a carburetor issue. This would be a sign of things to come in the remainder of Pro Tour as the team would be unable to find the right amount of engine speed in either of the two races in Indiana for the SummerNationals or Las Vegas for the SuperNationals. The final event in the SKUSA Pro Tour did however provide Jetpak Jak a third place podium finish with some crafty driving and just enough points to secure him the #3 championship plate for 2016.

For the last two years, as both a nine and ten year old, Jak has placed on the SKUSA SuperNationals podium in Las Vegas, a tough feat in the TaG Cadet class for sure.

Jak would like to thank his sponsors OMP, Palmetto MDR and Alan Rudolph Racing Academy. Others who assisted through the year in these events included Seth Nash of Nash Motorsportz, Chris Freckleton, Chris Hatfield, Simone Sorio, Mick Panigada of Energy Corse srl, and Stacey Cook of Energy Kart USA. Making his debut late in 2015 and continuing into 2016 at the Florida Winter tour will be Martin Stone. Jak will also be working with Paul Howard for the 2016 Florida Winter Tour events, as well as receiving continued engineering support from Seth Nash.

For more information on ‘Jetpak’ Jak, or to place sponsorship or calendar inquiries, please contact Nikki Crawford at nikocraw@gmail.com. Also, be sure to like ‘Jetpak’ Jak Crawford on his Facebook page at www.facebook.com/jetpakjakcrawford.
tags: JAK CRAWFORD Las Vegas
previous Olivier Maréchal: OK engines will change the game
next MARANELLO KART'S RACING TEAM FOR 2016