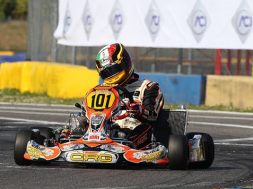 The 2015 Italian Champion Longhi and team Modena Kart got the podium in the first final of Castelletto. A victory for the new driver of Team Gamoto Spina and a double podium for Mallet in 60 Mini. Graziani and Torreggiani also on the podium in the new ACI Kart Junior, Colombo in Prodriver Over.

The first round of the Italian ACI Karting Championship was held in Castelletto di Branduzzo with 207 drivers on track. CRG drivers have been displaying a great level of competitiveness fighting for the top places of the classification in KZ2 with Team Modena Kart’s Ricardo Longhi and in 60 Mini, where Team Gamoto has secured the victory with the new arrival Alfio Spina and took a double podium with Evann Mallet.

FIRST PODIUM OF THE SEASON FOR LONGHI IN KZ2


Category KZ2 had 55 drivers on track. Italian 2015 Champion Riccardo Longhi, on CRG-TM run by Team Modena Corse, has been once again among the quickest getting on the podium of Race-1 in Castelletto di Branduzzo. He secured in fact a great third place after shining in qualifying with the quickest time of his group. Longhi kept his momentum claiming two wins and a second place in the heats. Race-2 started with top 8 grid inversion and Longhi had to concede some positions early on closing his effort in P6, but putting his name forward as one of the main contenders to victory of the Italian Championship.

Another Modena Kart driver has shown great speed in KZ2. Alessio Baldi, was in fact third of his qualifying group and eighth in the heats. Baldi could not shine later on due to a 10s time penalty in race-1, as happened to Lorenzo Giannoni, also on track with Modena Kart, who was slowed down by several problems.

Matteo Mazzucchelli has also raised CRG flag high: he was seventh in Race-1 and ninth in Race-2.


In 60 Mini, category with 70 drivers at the start, Team Gamoto and the new arrival Alfio Spina scored a great result on CRG-Tm. He took in fact a great victory in Race-2 after being seventh in Race-1. Another driver of team Gamoto was also among the quickest: the very young French Evann Mallet was in fact third absolute in qualifying, improved to second after heats and ended both Finals on the podium in P3.

Leonardo Bizzotto of Team Morsicani has been very quick in 60 Mini. He was sixth absolute in qualifying, eighth after heats, eighth again in Race-1 and sixth in Race-2.

In ACI Kart Junior – the new category employing Iame single branded engines and open also to eleven years old drivers, CRG’s Luca Graziani and Mathias Torreggiani managed to secure the podium. Graziani was third in both Finals, Torreggiani ended the second Final in P2 at the end of a lively series of position exchanges with his rival Menegon.


In OK Junior, Andrea Rosso of Team Morsicani had to retire in the first final after the third place scored in the heats. He managed to recoup well in Race-2 though as he ended sixth. Davide Colombo obtained a great second place in Prodriver Over’s Race-1, while Pasquale Feola on LH-Tm run by Team Valentino Racing was second absolute after a retirement due to incident in the first Final. Lorenzo Natali has been very quick in Prodriver Under for CRG-Tm, as he ended both Finals in the top-ten.

All results are available at www.acisportitalia.it