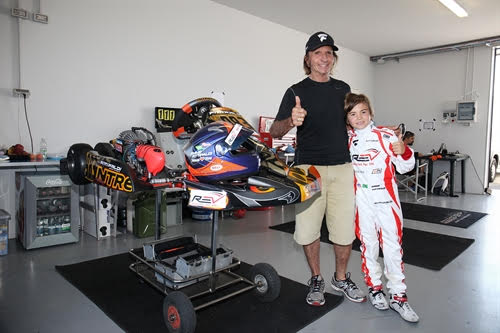 0
0   0
The success of 60 Mini at the Italian ACI Karting Championship involves also the sons of champions of the likes of Emerson Fittipaldi, Jarno Trulli and Luca Badoer. Mike Wilson, the most victorious Karting World Champion was also present in Adria.

The Adria Karting Raceway paddock of the Italian ACI Karting Championship has been quite crowded with nearly 300 drivers present in the categories, and it has been enlivened by the presence of several great motorsport champions that have played the role of coaches of their sons competing in 60 Mini, the class that has reached exceptional levels in terms of competitiveness.
The Italian ACI Karting Championship has been recording very high presence figures in 60 Mini also in this season featuring 9 to 12 years old drivers coming from all over the world. This is the category in which future stars get birth and champions of the past are well aware of this and therefore came back to karting tracks with their sons in the hope of having another champion in the household.
In Adria, the two times Formula 1 World Champion and two times winner of the Indy 500 Emerson Fittipaldi was present to follow his son “Emmo” Emerson Junior on track in 60 Mini, but former Formula 1 and Formula E driver Jarno Trulli was also present with his son Enzo and former Formula 1 driver Luca Badoer with his son Brando. These parents have important experience in karting themselves and are now back to follow their sons and to train the future champions. Mike Wilson – the most victorious Karting World Champion – was also present in Adria.
Emerson Fittipaldi, in Adria alongside his son Emmo competing for Team Intrepid Driver Program on Intrepid-Tm: “My son Emmo competes in Italy– Emerson Fittipaldi stated – because the level here is very high. We are here to learn… The Italian Championship is quite competitive, especially for us coming from America. This is the ideal setting for my son. I think that the Italian karting is the most competitive in the world. The best teams, chassis and engines are here and several talented drivers are here due to the high level of the championship. I hope that my son can learn quickly and develop his talent to move to higher categories as soon as possible. He recently won in Canada, now he has to win in Italy”.

Jarno Trulli was present with his son Enzo on Tony Kart-Vortex. Here is his view “60 Mini is a very successful category. – Jarno Trulli stated with a smile – I would also add that it is one of the most difficult of karting because it is quite crowded but not all drivers manage to get through to higher categories. The problem is that costs are too high, clearly, something is not working to put a limit to several things. Theoretically, 60 Mini should be a promotional category with identical chassis and engines, but there is an impressive R&D work. I think it should go back to my old times when everyone had the same engine in Mini, I remember it was Comer back then, which was a pretty straightforward and cheap engine. The single make option is the only way to allow kids to get to karting in the right way, now we are at a too professional level instead.”

Luca Badoer’s son Brando is present in 60 Mini with team Baby Race on Tony Kart-Tm. Luca Badoer comment: “I have seen important numbers also here in Adria and, most importantly, a very high level. A lot of drivers have a great preparation, they are fit and very strong. This, unfortunately, means that to be “up there”, kids need to get a lot of track time, training hard and taking part in a lot of races, as the level of 60 Mini is so high. They need to get very well prepared to face this very challenging experience”.
Mike Wilson, the most victorious World Champion in karting history with 6 world titles under his belt, was also present in Adria. Wilson is currently coaching the very young American driver Nikita Johnson. His comment: “I have been out of karting for a few years as I followed Zachary Claman De Melo and before that Lance Stroll. I am happy to see such a high number of drivers here in Adria, especially in Mini, that is the future of karting. I have to say that this 60 Mini is very competitive, I have seen very aggressive driving and incredible races. Very few tough moves, good overtaking, great stuff. This is my first race on my new driver Nikita Johnson. The target is to bring him high up the motorsport ladder and to get him to a motor racing career.”
The next round of the Italian ACI Karting Championship will take place in Siena next September 3rd for the fifth and closing race. News, images and footage of the Italian ACI Karting Championship is available at www.acisportitalia.it