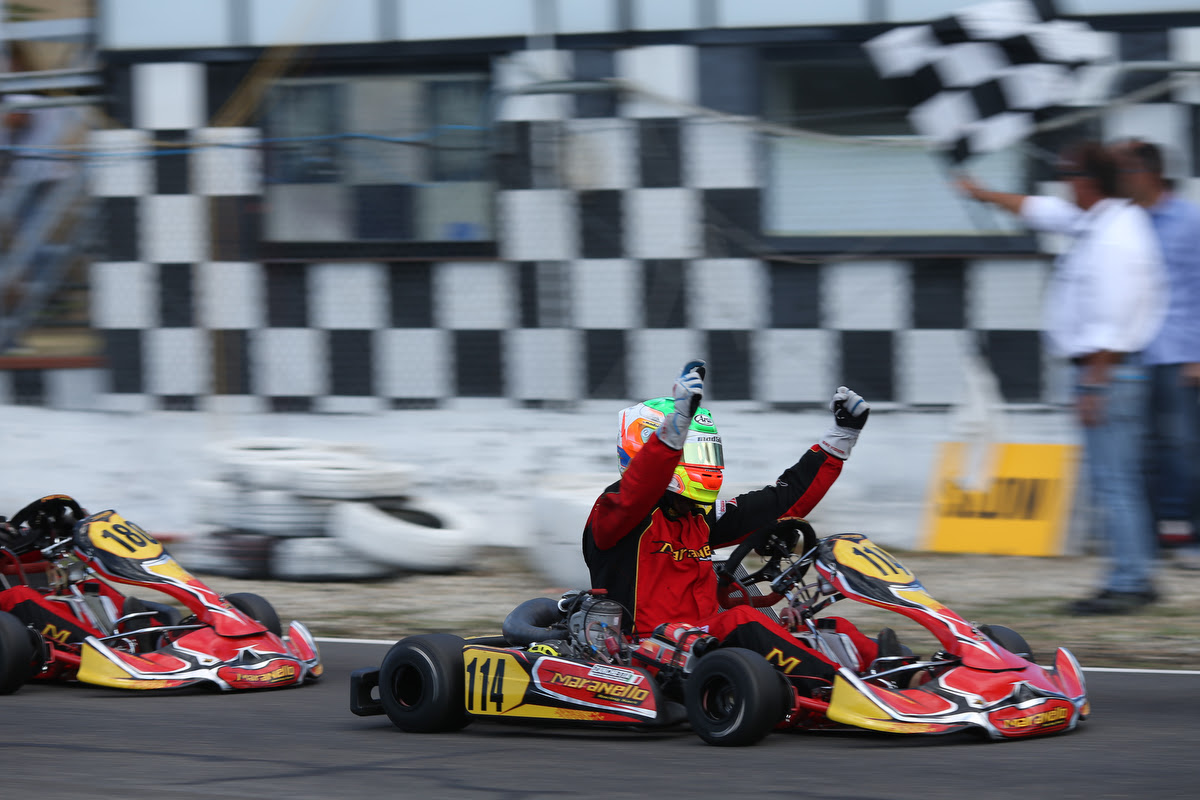 Maranello Kart had a strong season finale, as Marco Zanchetta secured the title of KZ2 Italian Champion and Luca Bombardelli that of Italian KZ3 Junior Champion.

Marco Zanchetta has deserved a round of applause in Siena’s KZ2 on Maranello-Tm, as he put in a bold, but also wise, performance in this fifth and closing round of the ACI Italian Karting Championship, keeping the classification leadership built with the victories scored in the first round of Lonato and in Sarno, alongside all the other placings. Zanchetta has always kept the lead of the classification in his successful campaign. In Siena, Zanchetta has secured that third place allowing him to clinch the title in Race-1, before running the second Final. In Race-2, Zanchetta has then put in a good race taking a solid fifth place.

Marco Zanchetta: “Certainly, the second final has been easier as I did not have that pressure you feel when something big is at stakes. Compared to Race-1, I was hoping to do something better, but we tested some new solutions ahead of the International Super Cup CIK-FIA of KZ2 that will take place next week in Wackersdorf. It is OK though. This season has been exceptional for me, it has been extraordinary to be back on such a high, after some time off. I have been chasing this KZ2 Italian Title for quite some time, I lost several of them for a handful of points. This year I tried not to make mistakes, I only made one in Sarno and that was helpful. Sometimes, when you make a mistake and you are humble enough, you can understand where there is room for improvement. Never give up, if you really want something, you can get it.”

Flavio Sani has been the other great protagonist on Maranello-Tm and closed Race-1 in Zanchetta’s slipstream in P4, before taking a splendid win in Race-2. Sani scored another good performance after his recent victory in the Mojo Trophy in Siena, and this is a good build up to the forthcoming Super Cup of Wackersdorf.

Among the quickest, as always, Marco Pastacaldi has fought for top positions on Maranello-Tm, taking P6 in Race-1 and the fourth place, proceeding Zanchetta, in Race-2.

Maranello did not score great performances only in KZ2. In KZ3 Junior, Luca Bombardelli took in fact the title on Maranello-Tm at the end of the two finals held in Siena, as he was fourth in Race-1 and third in Race-2. These results earned Bombardelli the title of Italian Champion of the category. The successful campaign of Maranello Kart in KZ3 Junior was completed by the young Mattia Giannini, who ended Race-1 in third place and then claimed a splendid victory in Race-1, taking the runner up position in the Championship with it.

FRANCESCA CIFOLA “QUEEN” OF KZ3 UNDER

TONOLI THIRD IN THE KZ3 OVER ITALIAN CHAMPIONSHIP

Andrea Tonoli has been once again among the quickest in KZ3 Over on Maranello-Tm and closed his campaign in third place, always being on the podium, as in Siena where he ended both Finals in second place.

In KZ4, Maurizio Giberti missed out on winning the title on Maranello-Tm mainly due to the retirement in Race-1. In the second final, Giberti recovered up to the third place. Thanks to the victory scored in Battipaglia and the double podium in Lonato, Giberti ended his campaign in third place.

Maranello Kart’s manager Luca Iannaccone commented the race in this way: “This has been a particularly tight Italian Championship, one fought from the first to the last race, particularly hard-earned and awaited. In the past few years we worked hard to reach this goal again. Most of the credit goes to our collaborators Stefano Griggio and Tiziano Rizzi, that gave their maximum and obtained this important result with their experience. Marco Zanchetta has been superb, after one year of break he got back to racing with this objective in mind and he achieved it. Luca Bombardelli has also been very good and wisely administered races and the championship. I would like to thank all the members of the Team and drivers that took part in this championship and in the final round of the Italian Championship, proving to be worth of wearing the colors of an outfit that always tries to be competitive. Now we need to keep our concentration high for the next International race that is the CIK-FIA World Championship to take place this coming weekend in Wackesdorf.”

Classifications and results are available on www.acisport.it/it/CIK/home.