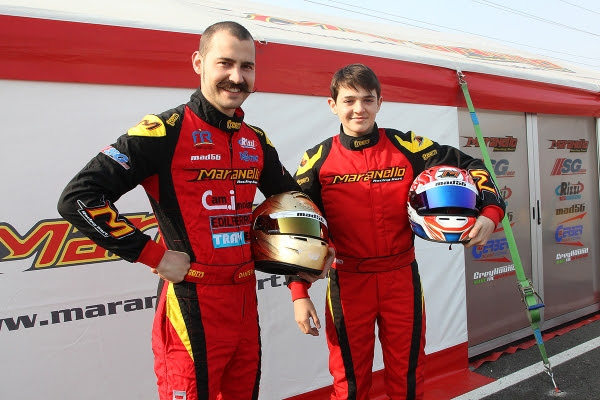 The sporting programme for next season has been defined. SG RACE confirmed at the lead of the Racing Team and Tiziano Rizzi regarding TM engines. Tommaso Mosca and Massimo Dante the top drivers in the main KZ2 competitions. The presence in Rok Cup and Iame X30 has also been announced.

The 2016 sporting programme has already been defined at Maranello Kart, as the squad will continue the participation in the main national and international Championships with renewed enthusiasm, after the very good performances scored also in this season.Continuing along a well proven path, Maranello Kart confirmed the agreement withStefano Griggio by SG RACE to lead the Racing Team, with the objective of giving some further thrust to the potential of the whole team. The collaboration with Tiziano Rizziregarding the preparation and development of TM engines has also been confirmed.

Among the drivers, the young driver from Brescia Tommaso Mosca and the expert driver from Trento Massimo Dante have been confirmed and will partake in all the main KZ2 competitions. In particular, Mosca will also compete in the CIK-FIA European and World Championships, alongside some other participations in some prestigious championships like the German DKM.

Alongside the commitment in KZ2, Maranello Kart Racing Team will also support the participation in the Rok Cup and Iame X30 championships in 2016.

The 2016 programme will be completed shortly with some further agreements that are currently under negotiation.