New winners at DKM-half-time in Wackersdorf 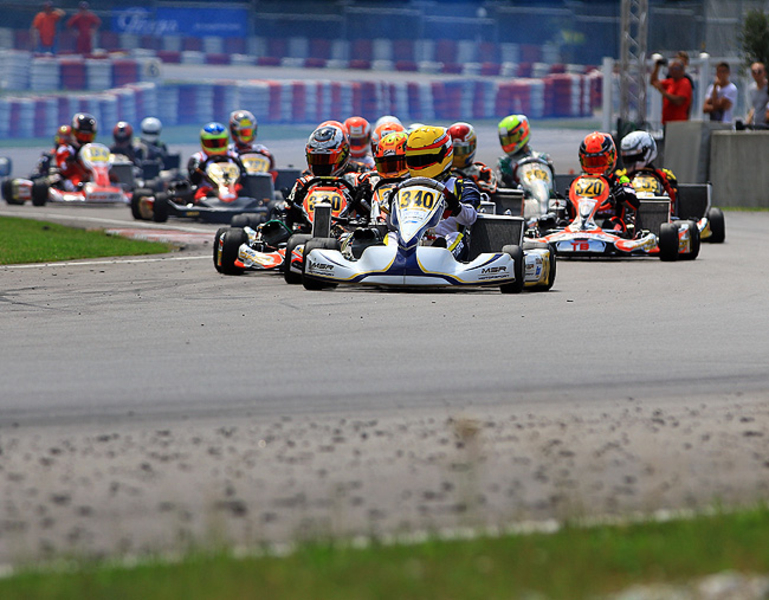 The Prokart Raceland Wackersdorf welcomed 160 participants to the half-time races of the four grade series of the German Kart Championship last weekend (July 8th – 9th). The fields were very balanced – there were seven different winners in eight races. The fights for the title are therefore still very exciting.

After the first races in Ampfing and Kerpen the German Kart Championship already started into its crucial phase at the Prokart Raceland Wackersdorf. 160 drivers started into the ranked races five and six. In midsummery temperatures the races of the four classes DSKC, DKSM, DJKM and DKM were balanced as they hadn’t been in a long time. There were seven different winners in eight final races: Alessio Curto, Nico Gruber (both DSKC), Jeremy Iglesias, Jorrit Pex (both DSKM), Hugo Sasse, Luigi Coluccio (both DJKM) and Dennis Hauger (DKM).

The best racing scenes on the 1.190m long track can be viewed on the German automobile-, engine- and motorsports-channel MOTORVISION TV again. On July 23rd at 3:55pm the channel is going to broadcast the 30-minute-highlight magazine. Additionally, all races can be viewed for free at www.live-timing.de.

Kerpen-double winner David Detmers (MSR Motorsport/WST-Power) tied in with his performance from the Erftland during qualifying and the heats. The Tony kart driver led the DSKC-list of rankings and drove towards victory during the first race as well. In the end a tire-damage cost him the victory though and he had to end the race five laps early. His victory went to Alessio Curto. The Sodi kart driver felt the pressure of his pursuer Nico Gruber (KSW BirelART Austria Racing Team), but until crossing the finish line the Austrian wasn’t able to find a way past him and had to watch on as Curto celebrated his first DSKC success. Behind the duo, Nico Neumann (CRG Performance) followed by Julian Müller (Mach1 Motorsport) and Jeroen Bos (CRG Holland) completed the cup ranks. Winner Curto was very happy about his success in his interview: “I’m really glad to have won here. We’re competing as lone fighters and can annoy the big teams a little. I’ve now collected important championship points due to my victory.”

Kick-off winner Curto didn’t achieve a perfect start into the second race and fell out completely in the end. Gruber took the place at the front. The BirelART-driver was able to strengthen his position during the course of the 21 laps and then celebrated his first victory at the DSKC: “I didn’t expect to win here, especially so clearly. I already know the track really well due to the past races though and today everything went perfectly.” Things were very exciting among the pursuers: Jeroen Bos (CRG Holland), Julian Müller (Mach1 Motorsport) and Tobias Mähler (Kartshop Ampfing) fought for second place. During the 11th lap there was a preliminary decision then. After several changes of positions Müller and Mähler collided and both had to drop out. Dutchman Bos wasn’t able to rest after that though. Nico Neumann (CRG Performance), Moritz Horn (CRG TB Racing Team) and Lucas Speck got close from behind. In the end, Neumann passed him by and came in second in front of Bos, Horn and Speck.

Fabian Federer (SRP Racing Team) set the tone at the German Shifterkart Championship on Saturday. The former European champion was the fastest driver at qualifying and won the following heats as well. He had bad luck during the first race though and parked his CRG kart in the meadow involuntarily. Jeremy Iglesias (Formula K Racing Team) achieved the victory and thanked his team in his interview: “Everyone did a great job and has their part in this success.” The overall leading driver Stan Pex (CRG Holland) temporarily fell back to fourth place, fought his way forward again in the end and came in second. Directly behind him was his brother Jorrit Pex (CRG Holland). Leon Köhler (KSM Schumacher Racing Team) came in on the great fourth place as best German driver, but a later time-penalty threw him back to tenth place. His fourth place went to Fabrizio Rosati (SRP Racing Team) in front of Brandon Nilsson (Gold by Brandon Racing).

The tire-tactics of fife-time German Shifterkart Champion Jorrit Pex worked well during the second race then. Due to two new tires he had an advantage compared to kick-off winner Iglesias and knew how to use it. He took the lead during the second lap and kept a distance to his opponents until the end. “I really like driving in Wackersdorf and am happy about the victory and my championship lead. Unfortunately my brother Stan fell out due to a technical defect before the start, so we have mixed feelings – good and bad ones”, the Dutchman summed up. Behind him Iglesias also drove a safe race on second place. Best German driver Leon Köhler showed a great performance again too. From tenth starting position he drove past his international opponents and ended up on the podium on third place. Former world champion Flavio Camponeschi (CRG Germany) followed on fourth place in front of Rick Dreezen (KSW BirelART Austria Racing Team) on fifth place. Man of the match was Fabian Federer from South Tyrol: He fought his way forward from the last to the seventh place.

Leading championship driver Niels Tröger (CRG TB Racing Team) secured his first championship points due to pole position at qualifying and drove among the front field during the following heats as well. His team mate Hugo Sasse (CRG TB Racing Team) took the lead of the interim rankings though and thereby laid the foundation for his first race victory at the German Junior Kart Championship. During the first final race the sponsored driver of the ADAC Sports Foundation drove off and achieved a clear victory. At the finish line the 13-year-old was really happy: “Things already went really well for us yesterday and I’m happy that it continued this way today. I want to thank my team and my family for their support.” Luigi Coluccio (KSM Schumacher Racing Team) drove forward to second place. He fought his way past his opponents from eighth place and stayed in the leading driver’s wind shadow. Kas Haverkort (CRG Keijzer Racing Team) came in third in front of Victor Majgaard and Xavier Handsaeme. Unlucky driver of the race was Niels Tröger (CRG TB Racing Team). The leading driver of the championship had to drop out of the race due to tire-damage while on third place.

The juniors then kept things exciting during the second race. In the beginning, Sasse led the field, but the German fell back to fifth place towards the middle of the race. Hadrien David (Chiesa Corse) then took the lead. The Frenchman already had a considerable advance and drove towards victory. But during the last two laps his direct pursuer Luigi Coluccio set off the turbo and drove past him at the last minute due to a great maneuver. Thereby the Italian celebrated his first victory at the DJKM. “I made a small mistake at the beginning of the race, but was able to close the gap again and used my chance. I’ve collected important championship points due to this victory”, he rejoiced on the winners’ podium. As best German driver, Donar Niels Munding (Kali-Kart Stern Motorsport) followed on third position. Sasse still came in fourth in front of Kas Haverkort (CRG Keijzer Racing Team) on fifth place.

Local hero Valentino Fritsch (KSM Schumacher Racing Team) used all of his experience during qualifying on his home track and achieved his first pole position at the top class of German kart racing. During the course of the heats he had to forfeit the lead though. Dennis Hauger (CRG Holland) won both rounds and ended up on first place of the interim rankings. From pole position the Norwegian showed a spotless performance during the first final race then and won. Matej Kacovsky (Solgat Motorsport) established himself on the strong second place. The Czech lost some ground at the beginning of the race but fought his way forward skillfully during the last third of the race and achieved his first place on the podium at the DKM. Glenn van Berlo (CRG Keijzer Racing) came in third in front of best German driver Luca Maisch (CRG TB Racing Team). David Schumacher (KSM Schumacher Racing Team) took the fifth place off his team mate Paavo Tonteri (KSM Schumacher Racing Team) during the last lap.

Hauger perfected his weekend during the second race. Again he stayed at the forefront and took the lead on the overall list of rankings due to his double victory as well. “We were able to constantly drive our high speed throughout the weekend. I focused fully on the races and am really happy about the final result”, the youngster summed up contently. Hauger wasn’t able to rest during the second race though. Glenn van Berlo stayed in the leading driver’s wind shadow throughout the entire race, but couldn’t drive past him in the end. David Schumacher fought his way to third place early on and ended up on the podium too. Kacovsky finished among the top five again on fourth place in front of Kilian Meyer (CRG Holland) on fifth.

The German Kart Championship is now going to take a summer break and is going to return to Wackersdorf on the last weekend of August (25th-27th). The first preliminary decisions regarding the titles might be made then.