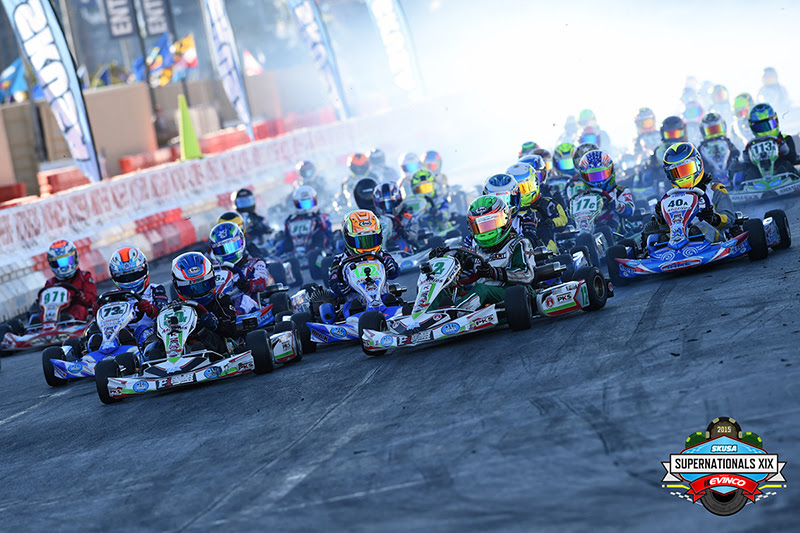 P1 Engines once again had a strong showing at a national-level competition, scoring three podiums finishes and six top-ten results at the annual Superkarts! USA (SKUSA) SuperNationals held at the Las Vegas Convention Center in Las Vegas, Nevada. Taking place over the November 18-22 weekend, P1 Engines drivers had a strong finish to the season as they now look forward to the start of their 2016 campaign.

“We are very proud of our results,” said Jesus Vasquez, owner of P1 Engines. “We are proud to offer our customers engines that allow them to achieve success.”

In TaG Cadet, Oliver Calvo of PKS qualified tenth and won the first heat race. He was second in heat number two and 12th in heat three. In the final, he took the lead early and led until the last corner of the last lap, when he was overtaken and forced into the trackside barriers. Teammate Tomas Mejia finished second in the main event after qualifying well and having strong finishes in each of the three heat races.

Ashton Torgerson qualified outside the top-30 but managed to make up several spots in the heat races, starting inside the top-20 for the final. He fought hard throughout the race, working his way through the field to finish in a solid tenth.

In talent-laden TaG Senior, last year’s SuperNats winner Marco Maestranzi of Top Kart USA, showed that he had the speed necessary to win for the second year in a row. He qualified fourth and ran well through the heat races, putting himself in a strong position for the final on Super Sunday. In the end, he fell a lap short and took home a second place podium result. Kevin Breese had a rollercoaster weekend. After some bad luck to start, he won his final heat race. In Sunday’s main event, despite having the speed to run with the leaders, contact took him out of the race early and left him with a disappointing DNF result.

In TaG Junior, Vinicius Ponce of Rolison Performance Group led the way for P1, qualifying eighth and remaining in the top-ten throughout the event. He started the final in a good position, climbing several spots during the race and securing a third place podium finish. Dante Yu of Nash Motorsports had his best race weekend of the year, running inside the top-ten through all of the heat races. He finished seventh in the final. Charles Milesi, running for Team Koene USA, started the race in 20th and worked his way through the field to finish ninth. Colby Dubato also ran well through the heat races. In the final, he had a mechanical failure while running in the top-ten and was unable to finish the race.

Vasquez added, “2016 is right around the corner and we welcome teams and customers to contact us for their engine needs. With a solid track record and a trackside support program that is second to none, P1 Engines will continue to push hard throughout 2016 to remain on top.”

tags: p1 engines SKUSA Supernationals
previous According CRG Holland, the introduction of OK engines will be very positive
next THE NEW EDITIONS OF THE ANDREA MARGUTTI TROPHY AND TROFEO DELLE INDUSTRIE OF 2016 AT SOUTH GARDA KARTING