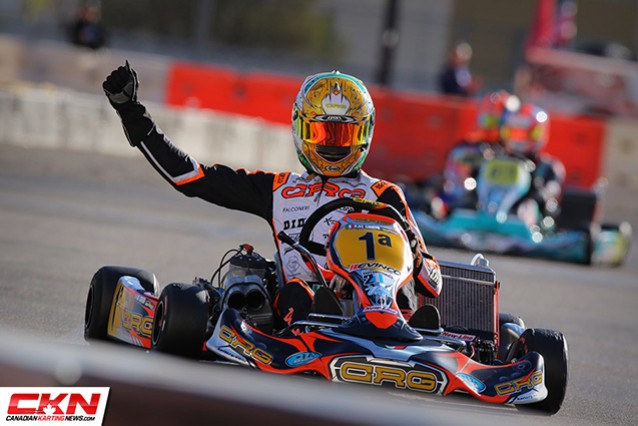 Paolo De Conto secured the third win in KZ in Las Vegas at the end of a golden season for the CRG driver. Regarding the other CRG Nordam drivers, Laurent Marchandise won S2 and Callum Bradshaw ended on the podium of X30 Senior.

CRG claimed another victory in Las Vegas (Nevada) at the most important appointment in North America. Paolo De Conto hit the jackpot securing an exceptional third win in the Skusa Super National after the victories scored in 2014 and 2016.

In this 21st edition, Paolo De Conto on CRG-Tm did not leave much room to his rivals in KZ, winning the prestigious American race with the support of CRG Nordam, at the end of what has been a golden season for the Italian driver that also claimed his second KZ World Championship, third KZ European Championship and second win at the “Race of Stars” in Australia.

In the Final held in Vegas Paolo De Conto started from the second row and got the lead on lap seven (of 20), claiming an authoritative win that resembled the recent victory at the World Championship held in Wackersdorf – when he won again from the second row of the grid!

CRG Nordam has also fielded Benjamin Tornqvist and Ricco Shlaimon in KZ, but both drivers did not finish, while Antonio Serravalle has been disqualified.

A total of 28 drivers were supported by CRG Nordam in Las Vegas. Among these, Laurent Marchandise took the win in S2, while Callum Bradshaw secured a great third place in X30 Senior as Olin Galli was eighth, Gabriel Bortoleto was ninth in X30 Junior leading the new entry Tyler Maxson who made a good debut with CRG. Eduardo Dieter was seventh in TAG Master instead.

tags: CRG PAOLO DE CONTO SKUSA Supernationals
previous Before the second round of Adria, on schedule from 9th to 12th November, the leaders of the standings of the WSK Final Cup are Travisanutto (I – Zanardi-Parilla OK), Gustafsson (S – Tony-Vortex OKJ), Lorandi (I – Tony-Vortex KZ2) and Bedrin (RUS – Tony-TM 60 Mini).
next DKM also going to start with Vega-tires in 2018