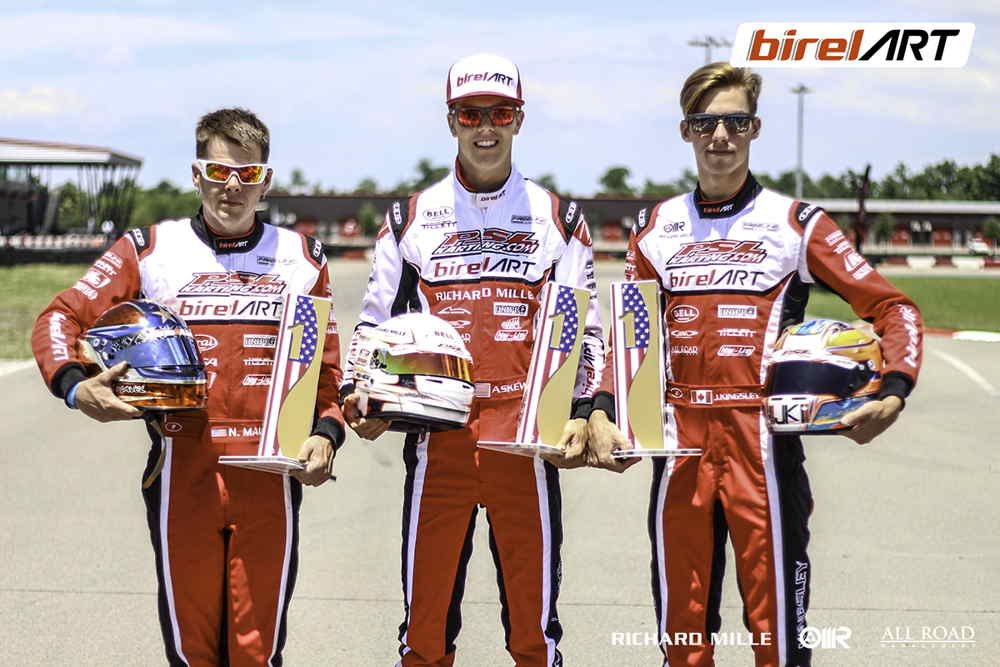 After competing for the Rotax Pan-American Championship in 2013, PSL returned to New Orleans, LA to take home three wins in a clean sweep at the opening round of the US Open.

“We’ve been working on every aspect of our program since the end of last season”, commented Team Manager Coy Arbour, “Birel ART has been a massive support in building our product to the level it is at now, and I think the results speak for themselves.”

Oliver Askew did just that this weekend, taking the pole, 3 heat wins and clearing the field in the final with a decent margin of victory in the competitive Rotax Senior category.   The 2016 Birel ART RY-30 is proving to be versatile in all situations and conditions.  Gianfranco Mazzaferro was on the gas all weekend, out pacing Oliver Askew in some sessions.  A popped chain ended Gianfranco’s final while cruising comfortably in P2.

DD2, for PSL, has been a staple category for the North American Birel ART importer, as again, they proved the PSL engine program combined with Birel ART’s CRY-30-RX, is the chassis to own in the two speed class.  Jeffrey Kingsley (DD2) and Nathan Mauel (DD2-Masters) laid down identical performances all week, both earning pole, 4 heat wins and a comfortable margin of victory in the final.  Luis Zervigon (DD2-M) finished P2 just behind Nathan after making his first national calendar appearance since the US Open Las Vegas in 2015.

Thomas Nepveu, PSL’s sole Mini-Max driver this weekend, was able to secure P5 while still keeping pace with the leaders in the final on the long NOLA Motorsports circuit.


Aden Rudolph (Micro Max), the youngest member of the roster at US Open, battled in by far the most competitive category this weekend taking home a solid P9 while cruising the nearly 1 minute 10 second circuit.

“We’re happy about the results for the team, however, the championship has only begun.  We need to keep this momentum going for Utah, but now we must focus our energy on this weekend in Phoenix for the opening round of SKUSA Pro-Tour.”