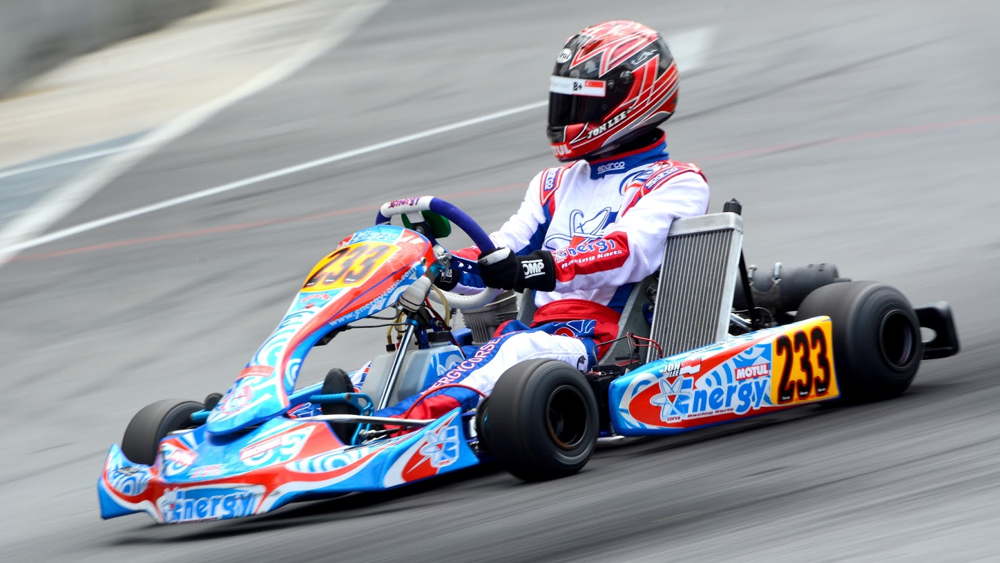 It’s an energizing start to the new year for Jon as he switches gear to become an official driver with Energy Corse Asia (ECA). Racing with his new team, Jon will now be attired in his new electric blue “Energy” go-kart suit.

This year, Jon also reached a new milestone by starting his first year at Victoria Junior College (VJC). As he continues to juggle between his school work and go-kart racing, Jon has decided to compete only in Singapore races due to the heavier academic commitments and CCA activities (he is now a member of the VJC Dance Club).

With a very tight schedule, seat setting took place a week before the race but the first time Jon drove the kart was just two days before race day and it was in the rain. Nevertheless, with full support from both his dad aka mechanic and the Team Principal, Josh Hunt, Jon is excited to go racing under this new environment.

Unfortunately upon returning home, Jon felt feverish and was down with a throat infection on Thursday night.

Despite not in his top form, Jon still pushes hard on Friday. Only five sessions of practice and running in the race engine, it is a work in progress to get the set-up right heading intoSaturday’s Qualifying. Aside from setting the kart according to the ever changing track conditions, Jon was also given tips by Josh on how to best drive the new specification Energy kart. While continuously adjusting his driving style to suit the kart, Jon’s best effort in Qualifying landed him at 7th position. Making most out of the starting in the mid pack, Jon was using Race 1 to fine tune his feel for the kart and eventually carved his way to 5th position. Feeling more comfortable and confident with the kart, Jon completed Race 2 in 4th position. Tabulated points from Race 1 and 2, secured 4th position for Jon.

According to ECA, this is their biggest driver line up with 8 drivers across 5 classes. A total of 12 drivers competed in the Senior Category, including Jon and his team-mate, Oscar Deluzuriaga.

Commenting on the new partnership with Jon, Josh said: “Energy Corse Asia are really excited to have Jon Lee join our growing team. Jon’s karting results speak for themselves, and I look forward to working with him closely to further develop his driving skills through our development program”.

“I’m really excited and look forward to the new challenges this year. After a largely successful year with TPCRP last year, I hope to replicate or even surpass what I accomplished last year. There will be many challenges along the way but with the expertise and support of my new team, I’m confident we can achieve our goals,” said Jon. “I would like to thank my previous team for their support and I also want to thank my new team, Energy Corse Asia, for believing in me”.

Stay tuned as Jon continues to compete for more points in the next four rounds of the championship: