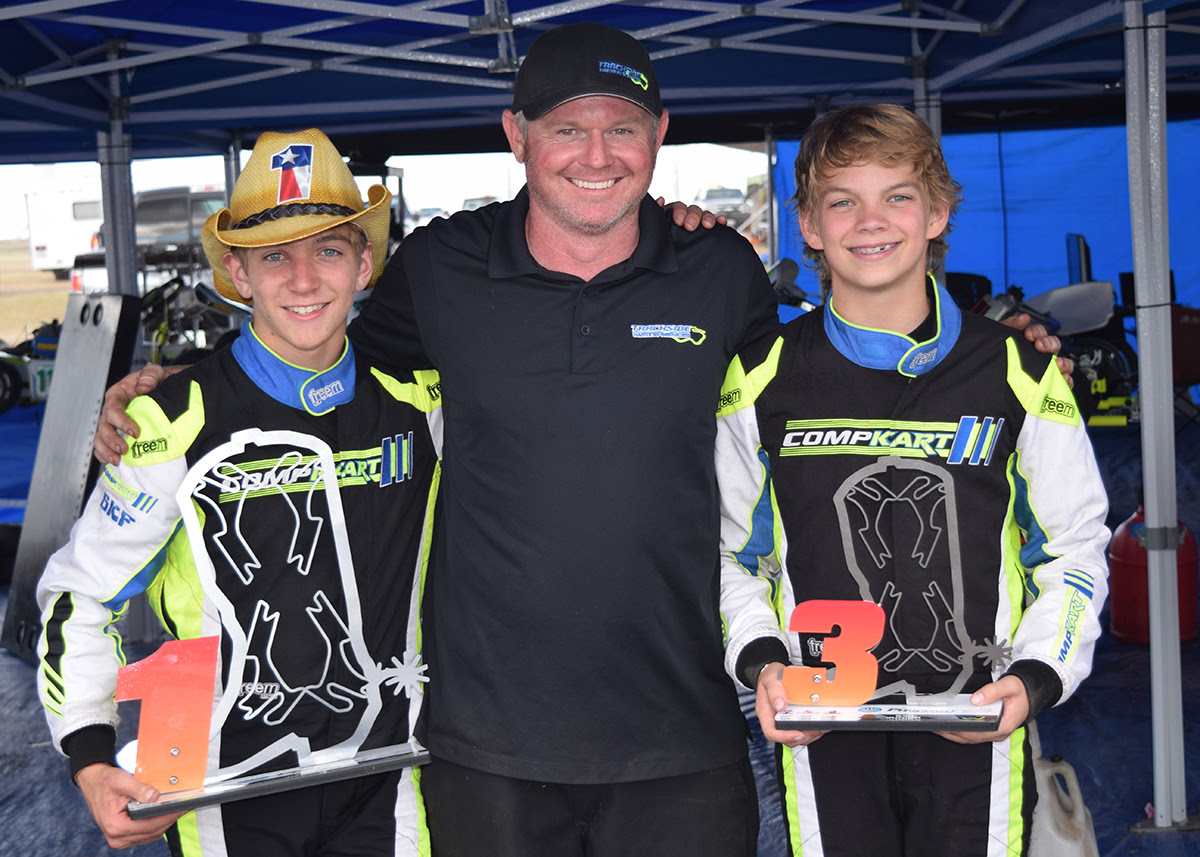 0
0   0
“Texas based team arrived at new Amarillo facility with six drivers”
Round four of the Texas Pro Kart Challenge (TPKC) would see Trackside Karting Services travel to Amarillo, Texas for the premiere event at the new Amarillo Kart Circuit. With six drivers and a new venue, the results continued to be the same for the COMPKART squad as wins and podiums were again plentiful.

“The Amarillo Kart Circuit is a good track. The layout provides for great racing and a lot of passing opportunities,” explained Trackside Karting Services Tim Lobaugh. “With the track being relatively new, testing time was limited so we relied on the knowledge of our tuners and skill of our drivers to get up to speed quickly. At the end of the weekend, we were able to bag more wins and podiums, a true testament to the TKS team.”
In the IAME Mini swift class, Ryan Shehan had a rough day. With some problems in qualifying that saw him qualify in the tenth position, he welcomed the heat races with the opportunity to move forward. Heat one saw Shehan gain two positions to finish eighth while in heat two, a bad start would see him fall down the running order before claiming a ninth place result in the end. During the main event, another turn one incident had Shehan fall towards to rear of the field but the 11-year-old never gave up and fought back to a well-deserved sixth place finish.
McKenzy Cresswell had an up and down weekend but showed pace. While he was able to qualify in the seventh position, a broken chain would result in a DNF in heat one. Heat two saw Cresswell have a solid result finishing eighth and he was able to race forward in the final to finish fifth.

Lobaugh added, “We have had the material to win the last two races, just bad racing luck has stopped us from showing what we really have had.”
Davis Cunningham had a tough go this race, as he never found a drafting partner for qualifying. Starting heat one from the eleventh position, Cunningham was roughed up on the start, but was still able to finish in P10. Heat two showed he had the talent and speed as he raced up to the sixth position before the checkered flag would fly. Unfortunately, that’s where the day would take a turn for the worse. In the main event, Davis was racing hard in fourth and making a pass for third position as he was hit and removed off the racing groove. Falling well down the running order, Davis put his head down and drove right back up to take the eighth spot.
X30 Junior had a small but talented field and TKS’s Tyler Orum had a little trouble in qualifying. Tyler would start the first heat in the seventh spot and ended with a result that matched his starting position. Heat two was much of the same, as an increase in speed did not yield to a better result as Orum was once again in the seventh position.
“We never give up as a team and went to work trying to help get a result for Tyler,” claimed Lobaugh. “We improved the kart for the final and Tyler drove a great race. He would fight for a podium result and after a great battle, would end his day with a fifth place effort.”

Ethan Arndt would just miss the pole position in qualifying, but never stopped working on his pace. After a missed pass for the lead in heat one and a resulting third place result, Arndt would rebound in heat two to take the win. Starting on the pole position for the main event, the point leader would never miss a beat and win his second TPKC in a row and now takes a stranglehold on the point standings.
Travis Wiley had an outstanding weekend by qualifying fourth and claiming two fifth place finishes in the heat races. With an outstanding drive in the main event, Wiley would take the third and final step of the podium. Looking to try his hand at some national level racing, Wiley will travel with the TKS squad to the SuperKarts! USA (SKUSA) SummerNationals at New Castle Motorsports Park in two weeks‘ time.
Lobaugh added, “Another great weekend for the team and a big hats off to Gina French for putting on a great event. I would like to thank the Texas Pro Kart Challenge for a great karting program in the state of Texas as well as Woltjer Race Engines and COMPKART.”
For more information on Trackside Karting Services, COMPKART or to participate with the Texas based team, please contact Tim Lobaugh at 269.519.7593 or via e-mail to TracksideKartingServices@gmail.com.
tags: COMPKART
previous CRG PUTTING IN A VERY GOOD, BUT VERY UNLUCKY, PERFORMANCE IN FINLAND
next Garland Notches Impressive 3 Wide Win at VIR!