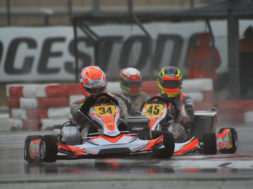 Wet race for the drivers of the WSK Super Master Series.

The circuit of Adria was a real challenge for the 243 drivers taking part in the WSK Super Master Series. The wet asphalt in the morning, in fact, got wetter and wetter during the day because of the continuous rain, which made the work of drivers and mechanics really hard. So, today’s qualifying heats were the ideal testing ground for the skills on wet track of the participants: the result was a series of outstandingly spectacular races, where the most experienced drivers were able to show what they are capable of, while the youngest ones seized the occasion to gain some experience. Then, in the early evening, the intensity of the rain increased and the race was stopped. The heats which were not run today were scheduled for tomorrow, before the decisive stage of the event which will continue regularly with the Pre-finals and the Finals of the four categories – KZ2, OK, OK Junior and 60 Mini-. All the final races will receive the media coverage provided by WSK and will be available in streaming on the official website wsk.it.


Travisanutto grabs the pole in OK.

The only category which completed the series of heats was the OK. The best performance was achieved by the Italian Lorenzo Travisanutto (Zanardi-Parilla-Bridgestone), who won three times and secured the pole-position of the Pre-final A. Next to him the French Victor Martins (Kosmic-Parilla), third in the overall ranking of the qualifying heats. The English Clement Novalak (Tony Kart-Vortex), always in second position behind Travisanutto, is the pole-sitter of the Pre-final B; second slot of the front row for the Russian Ivan Shvetsov (Tony Kart-Vortex).

Lundberg challenges his rivals on wet track in KZ2.


The Swedish Douglas Lundberg (Sodi-TM-Bridgestone) won two of the four heats which have taken place so far in KZ2. He is now leading the pack of his team-mates aiming at victory: the Dutch Bas Lammers and the French Anthony Abbasse, in fact, won the other two races. Among the drivers who placed in the first three places are also the Finnish Simo Puhakka, the Dutch Stan and Jorrit Pex (all on CRG-TM), the Swedish Emil Skaras (Tony Kart-TM) and the Italian Marco Ardigò (Tony Kart-Vortex). Two more heats tomorrow before the final stage.

Bulantsev still at the top in OK Junior.

The Russian Pavel Bulantsev (Tony Kart-Vortex-Vega), who set the best time in qualifying yesterday in the OK Junior, was the fastest also in today’s heats. He won three heats out of today’s eight races. The other winners were the Australian Jack Doohan (FA Kart-Vortex), the Italian drivers Giuseppe Fusco (EvoKart-LKE) and Leonardo Marseglia (Zanardi-Parilla), the British Jonny Edgar (Exprit-TM) and then the French Gillian Henrion (CRG-Parilla). There are two heats remaining in the OKJ too, which were scheduled for tomorrow.


Kenneally has a good start in 60 Mini.

The English Bray Kenneally (Energy-TM-Vega) had a good start today thanks to his two victories in today’s 6 races of the 60 Mini. The Russian Nikita Bedrin (Tony Kart-TM), the Italian drivers Gabriele Minì (Parolin-TM), Alfio Spina (CRG-TM) and Luca Giardelli (CRG-TM) won a race each. Four more heats tomorrow for the young drivers of this category.