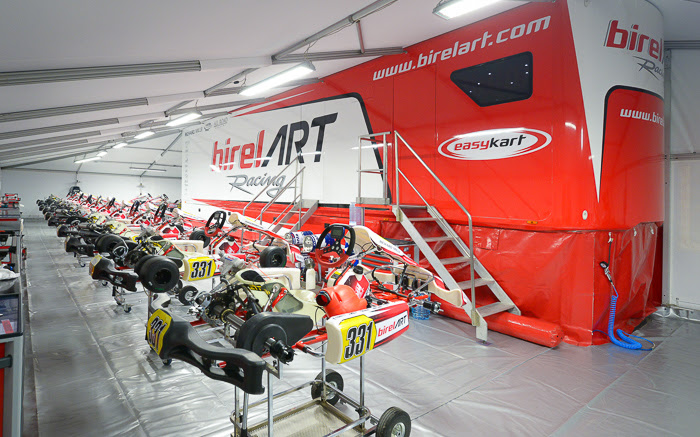 Birel ART demonstrated remarkable competitiveness in the first race of the 2017 season on the Adria Karting Raceway. The new organisation of the Birel ART and Ricciardo Kart Racing Teams made its debut at the WSK Champions Cup and there was already a very promising level of performance to validate the choices which will govern this new season. The excellent understanding between the various players as well as the quality of their performances point to very good things ahead for Birel ART in 2017.

The WSK Champions Cup took place in winter conditions which were complex to manage for everyone. The end result was the first objective of the team. Rickard Kaell Franchini explains the aims of Birel ART’s entry in this competition:

«A lot of things have changed in the Birel ART Racing Team for 2017. First of all, I want to make it clear that a new technical staff has been put in place around seasoned and experienced technicians. For this first race, it was a question of moulding the new team in line with our ambitions.


We are entering into a new exclusive collaboration with TM Racing for engines, but we have decided to call on a specific engineer for each of the four international categories. The TM Racing factory focuses on the KZ engines under the responsibility of Franco Drudi, Bruno Daldosso is in charge of the KZ2, Macháč Motors is in charge of OK and GFR Engines OK-Junior. Each of them can therefore work under the best conditions in their reserved
area.

Finally, our driver lineup has been largely renewed, with experienced drivers like Felice Tiene and also new recruits from a very young age as required by the current regulations for Juniors.

««All these new features have made the WSK Champions Cup an excellent training event for us. The assessment we can draw is very positive. Frankly, I did not anticipate that we were capable BIREL ART 2017 – Press release n°3 of such performances already. Anthony Famularo was able to achieve the fastest lap in an OK-Junior qualifying heat, Felice Tiene was the fastest in the KZ2 Prefinal, Rick Dreezen – Team KSW’s Birel ART driver – came close to the KZ2 final podium and Rasmus Lindh finished 3rd in the Prefinal in OK. In fact, most of our drivers had the opportunity to shine during this weekend.

«This race was also important to build a base to work on for the season. We know what we need to do to make progress and we will work to do so in the next event that will take place on the same circuit of Adria at the end of this week.»

Birel ART will line up from February 2nd to 5th 2017 in the first event of the WSK Super Master Series with three additional drivers, Marijn Kremers and Alexander Dahlberg in KZ2 under the colours of Birel ART, and Simon Ohlin in OK for Ricciardo Kart.

tags: 2017 birel art wsk
previous CRG: ONE, TWO-THREE IN KZ2 AT THE WSK CHAMPIONS CUP
next CRG IN ADRIA FOR THE WSK SUPER MASTER SERIES