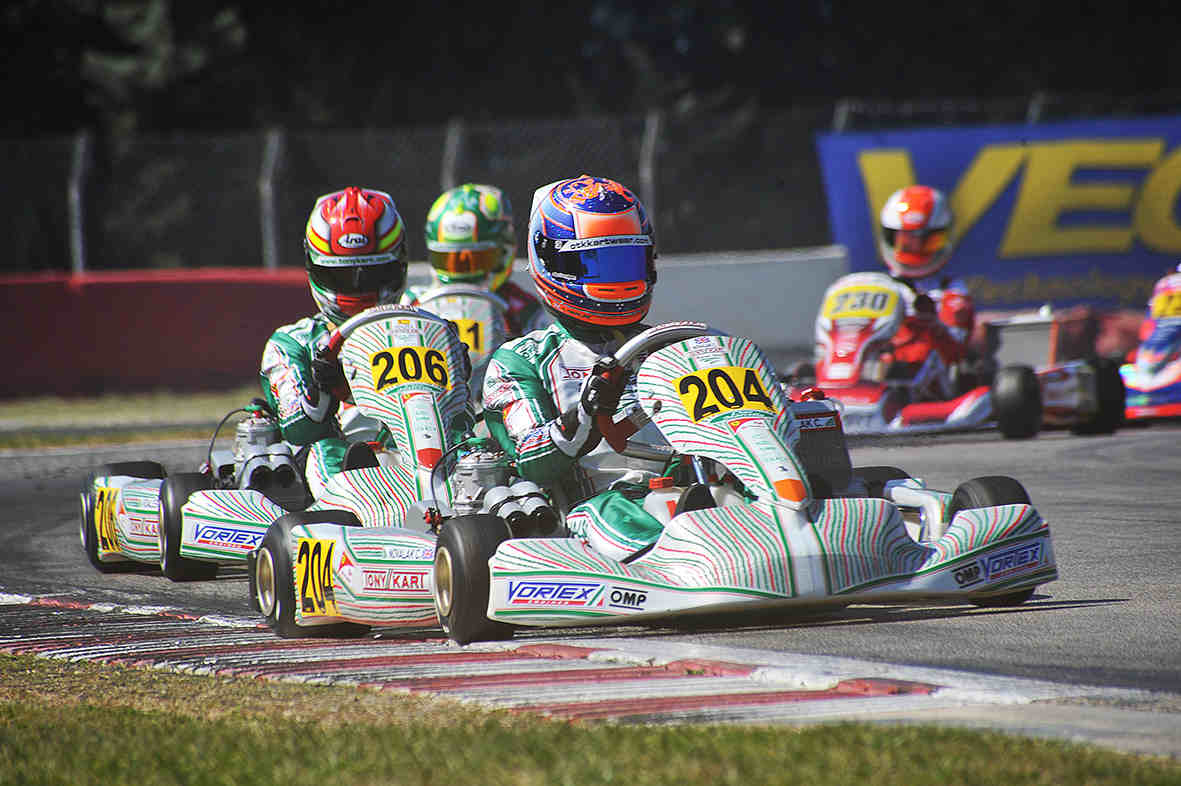 The WSK contest gets into top gears in Muro Leccese.

It is pure speed what the drivers of the WSK Super Master Series have to cope with if they want to succeed in the competition. They are taking part in the third out of four round of the season; the race is hosted by the facility set in Muro Leccese (I) this weekend. In the previous appointments drivers had to stick to their wet driving skills to make the grade, but the weather in southern Italy, near Otranto on the Adriatic sea, is totally different in these days. Temperature reached 20 degrees, but this new climatic condition did not affect the competitiveness of the 213 drivers of the four categories: KZ2, OK, OK Junior and 60 Mini. After today’s Heats, the starting grids of tomorrow’s Prefinals are ready. WSK Promotion, as usual, will provide full media coverage of the races thanks to the live streaming on wsk.it (broadcast will start at 11.00am).


Hajek challenges all in KZ2.

The Czeck Patrik Hajek (Kosmic-Vortex-Bridgestone) wants to become the man to beat in KZ2: he finished the series of Heats in top position thanks to two victories. The driver from Prague will have the Italian Marco Ardigò (Tony Kart-Vortex) next to him in the front row of the Prefinal A starting grid. It will be a grid full of big names, given that the second row will be occupied by the English Ben Hanley (Croc-TM) the Dutch Bas Lammers (Sodi-TM), the current leader of the category. He placed second in the qualifying stage scoring a victory: the Dutch Jorrit Pex (CRG-TM) will be the pole-sitter of the Prefinal B, with the French Jeremy Iglesias (Formula K-TM) in second position. Big names on this grid too, with the slots of the second rows filled by the Italian Lorenzo Camplese (Parolin-TM) and the French Anthony Abbasse (Sodi-TM).

Edgar the surprise in OKJ.


Johnny Edgar (Exprit-TM-Vega) was the most consistent in an OK Junior full of surprises. For the English, a success was more than enough to gain the pole in the Prefinal A. Second slot of the grid for the Dutch Kas Haverkort (CRG-Parilla). Unexpected results also for the second row, which will be occupied by the English Zak O’Sullivan (FA Kart-Vortex) and the Brazilian Gabriel Bortoleto (CRG-Parilla). The English Harry Thompson, winner in two Heats but only eighth in the third, is the pole-sitter of the Prefinal B, with the Swedish Dino Beganovic (Tony Kart-Vortex) in second position. Excellent second row with the Estonian Paul Aron (Tony Kart-Vortex) and the Italian Leonardo Marseglia (Zanardi-Parilla).

Novalak back on top in OK.

In the OK, the British Clement Novalak (Tony Kart-Vortex-Vega) struck immediately back after the third position scored yesterday. He won two of today’s six heats and gained the head of the qualifying standings. He will start from the first slot of the grid of the Prefinal A, but the Polish Karol Basz (Kosmic-Vortex), second, is eager to give him a hard time. The Brit will also need to watch his back carefully, given that the second row is occupied by two strong drivers such as the German David Schumacher and the Spanish Pedro Hiltbrand (both on Tony Kart-Vortex), ready to take over the leadership of the race. The Spanish David Vidales (Tony Kart-Vortex), second behind Novalak, won a heat and will start from the pole position of the Prefinal B. Next to him the Italian Lorenzo Travisanutto (Zanardi-Parilla), another frontrunner. Behind them, in second row, the Belgian Ulysse De Pauw (Kosmic-Parilla) and the Malaysian Bin Abdul Muizzuddin (DR-Parilla).

It was not easy to beat Gabriele Minì (Parolin-TM) today. He won three times and placed second in another heat and tomorrow, of course, he will be the pole-sitter of the Prefinal A in 60 Mini. The Italian will have the Brazilain Rafael Camara (BirelArt-TM) next to him, while the second row will be occupied by the Chinese Cenyu Han (Energy-TM) and Nikhil Bohra (CRG-TM) from Singapore. The current leader of the category, Andrea Antonelli (Tony Kart-Vortex), will start from the pole position of the Prefinal A thanks to his two victories. Second slot for the Russian Nikita Bedrin (Tony Kart-TM). Behind them the American Ugo Ugochukwu (Energy-Iame) and the Italian Federico Albanese (Righetti-Ridolfi-TM).