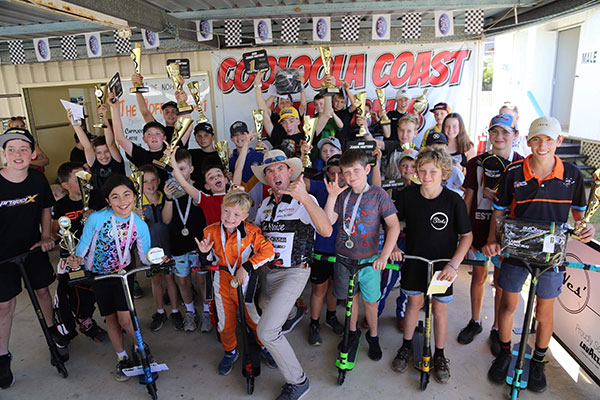 by Kev ‘The Noise’ Davies

One hell of a weekend was had by all and in the words of Karting Australia officials “some fantastic racing all weekend”.

There were many highlights.

Starting with the newest class of racing in Australia and the 4SS Juniors, Casey le-Garde got a clean sweep of victories as well as a new lap record but it was behind where all the action was. Keeannah Egan was fighting hard for second place against the very consistent Caitlin Ludbey and was holding it until 3 corners from the end when Keeannah’s chain came off! What cruel luck, leaving Haydn Crossley to get a well deserved 3rd.

In the KA4 Juniors, Ty O’Neil couldn’t quite find the tenth he needed in the final and just as close was the Whitsundays Kart Club driver “the missile” Cruise Mason who so nearly made the podium on his first visit to this track. Even more impressive is another debutant, Nathan Brien also from the Whitsundays Kart Club getting 3rd place, but it was the local power houses who shared the spoils with the Cooloola flyer Harvey Price coming home second behind the inform Zane Rinaldi who took the win with an awesome display of driving.

On the day the Cadet 12 was saved until last and rightly so because it gave us some of the most exciting racing the club has ever seen. Zac Bell came all the way from Gladstone and came so close to a podium. Likewise for Max Acquasanta who came down from Bundaberg and gradually got the key set right for the track on his first visit here grabbed 4th place! To the podium, and it has to be said Sammy McDermid worked and worked until his best result of the day came in the final where it counted. Onto second place and the travelling Michael Janusz was in top 3 contention all weekend and so no surprise to see him get second. This is where the amazing stuff started, on results it shows Beau Bromhead as the winner but that truly is half the story – he and the Tempur sponsored 98 of Jackson Cooper came together in turn one of lap one and couldn’t get the kart separated! When they did they were dead last. From there, Jackson Cooper went in to fight his way up to 6th place, but even more amazingly Beau Bromhead went through the entire field in 15 laps to take the win! Incredible driving and it also won him the Golden Child trophy awarded by myself “the noise”.

Cadet 9 had a twist too, and some absolutely amazing driving. They came over line 1) Dima, 2) Musico, 3) Burke, but after the stewards looked at the race the unlucky Toby Musico was handed a penalty for a starting infringement and so that put him back to 5th. That meant Oceane Colangelo was promoted to 4th and the first podium spot of 3rd went to Seth Huth. As By Burke from Bundaberg and Basilio Micale (Dima) came around the last corner there was almost contact and the stewards decision was to give Dima second place and Ky Burke got the win – there always has to be a winner and everyone accepted the decision handed down and the boys had a blast on track.

Cadet 9-P next, and the little beginners of the sport had such a good weekend of racing, and as with all classes they got 2 practice sessions / qualifying / 2 heats of ten laps / 2 heats of 12 laps then a 15 lap final. Jackson Mueller just missed out on a podium and just beaten to it coming home in 3rd was Rylan Hovey. Second place went to Warwick Kart Club member Madhava Sternbeck who battled for the entire 15 lap final to beaten by just 0.278 of a second by eventual winner all the way from Bundaberg, little Oliver Acquasanta. It was fabulous racing between the two and all the Cadet 9-P drivers showed excellent maturity and skills so early in their racing career.

In the Cadet 12P it was a run away victory for the #42 of Louis brown and Grandma Lynn was on the phone to Louis’ dad to listen in as the action unfolded (now she will enjoy watching the videos too!). Isaac Audoss has switched from dirt karting to the bitumen form of the sport and ducks to water springs to mind! He was quick straight out of the gate at a track he’s never seen before coming home second with a comfortable margin to third. In the final this is where all the action was as Zacharie Flood battled all race long with eventual third place getter, Liam Thomson.

The last class to report on is the KA3 Juniors. Jack Roberts found himself just off the pace in the final after showing good speed in heat 3 where he came third. The fight for 3rd was a long and hard one between fast Finlay Derry, who improved all weekend long, and Tyson Jennings. Tyson eventually got the last podium spot by 0.7 of a second. The battle in the final was nothing short or amazing with Ty Spencer dueling with local favourite Byron Phillips, swapping places lap after lap until they eventually emerged from the last corner on the last lap locked together and tyres actually running all the way to the line! Byron took the win by 0.020 of a second as the crowd watched on in amazement – what a win it was!

That concludes the weekends racing on a weekend that saw Cooloola Coast Kart Club put on 2 high end food vans, a movie in the pits on a huge screen on Saturday night and lots of laps of racing! All those drivers who travelled from far and wide got a chance to really test out the track as a shake down for the Queensland State Championships later in the year.

All the videos of every race, 54 interviews, some 1000 photos of karts/drivers/mechanics and spectators are all on Kev ‘the noise’ Davies Commentary page, and there is even a scooter race down the main straight thrown in.

At the end of racing presentation all the officials, volunteers and canteen staff were given a huge round of applause. Six lucky kids won scooters from Scooter & Skate Warehouse, one lucky driver won a DC Kart racing custom race suit.

Multiple other prizes were given out thanks to our awesome sponsors: