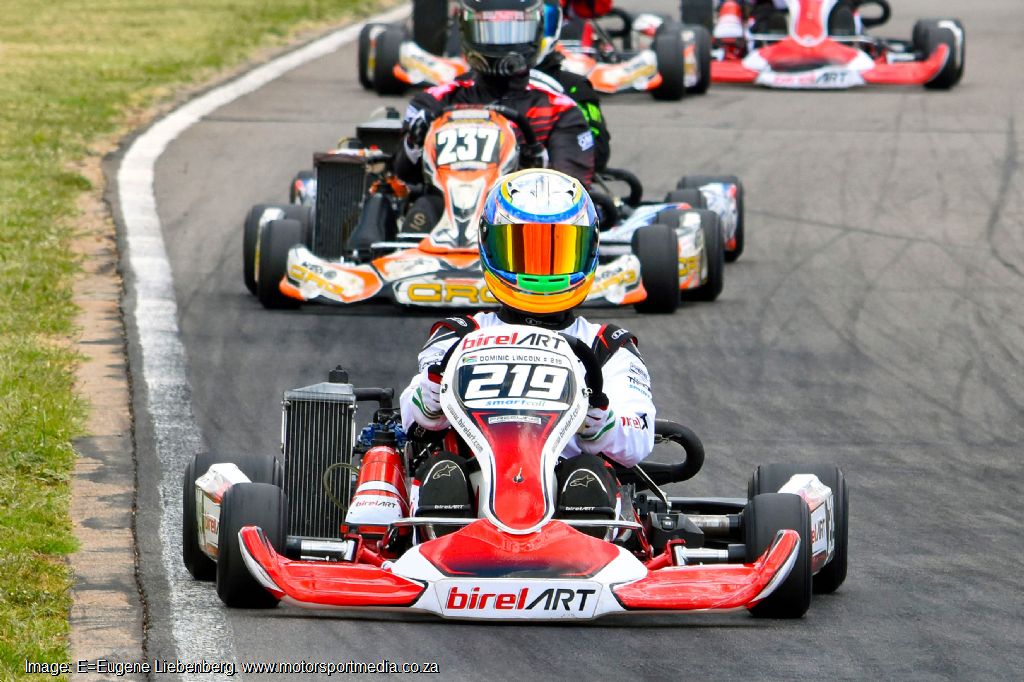 The 2018 Rotax Max Northern Regions Karting Championship exploded into action at a dramatic and eventful opening round at the Zwartkops International Kart Track on Saturday with a few surprise results, some expected outcomes and plenty action both on and off the Pretoria racetrack.

The under-15 Rotax Junior Max class is shaping up to be a key battleground in South African karting in 2018, with a hugely competitive 17-kart field taking to Zwartkops on Saturday following an equally impressive spat in the Western Cape regionals last weekend, so the nationals are bound to be massive, with closer than ever racing thanks to latest Rotax Max technology ensuring an even playing field. There was much posturing and speculation among competitors before the weekend, but it was Ormonde rookie Aquil Alibhai who emerged victorious on the day following a most impressive showing.

Kosmic-mounted Alibhai qualified fourth for the opening race and took his time to pick off Tony Kart duo Cameron Dias and Leyton Fourie and Kwanda Mokoena (FA Kart) to end up second behind reigning NR champion Jayden Els’ King Price CRG, with Mokoena third from Dias, Fourie and Jarrod Waberski’s DAW Praga. Els, Alibhai and Mokoena initially fought for the lead of race 2 before Els slipped back to leave Alibhai to win from Paulshof lad Mokoena, Els from Boksburg, Sandton lass Tiffany Napier (Birel ART), Waberski and Fourie, but Els was excluded on a technicality to allow his pursuers to each move up a position and Nathi Msimanga into sixth.

The final was much of the same, as Alibhai and Mokoena tussled up front before Alibhai cleared off to leave Mokoena fighting Fourie after Waberski stopped, while Napier kept a watching brief until pouncing on Fourie on the final lap. Mokoena was however found to be underweight and dropped to last place finisher to let Ethan Coetzee up to fourth ahead of Daniel de Paiva and Dias as Alibhai took the day in dominant style from Napier and Fourie, the rose among the karting thorns Dias was fourth from Mokoena and Coetzee.

DD2 promised to be a clash of the titans as former teammates, reigning SA champion Bradley Liebenberg (Birel ART) pipped runner up Benjamin Habig (TonyKart) to pole position, before the two delivered a scintillating first heat where Habig pipped Liebenberg to the post by a tenth of a second. Intrepid pilot Eugene Brittz was third from Brandon Smith (Ricciardo), Anton Pommersheim (CRG) and Nathan Hammond. Durbanite Habig led Lonehill lad Liebenberg again in race 2 until Brad stopped with a gearshift problem to allow Pretoria driver Brittz up to second from Pommersheim, Hammond, Pasqual Acquaah and Smith.

There was more drama in race 3 when Habig lost power when a battery terminal came loose while dicing Brittz for the lead, but Liebenberg came from the back to pass Brittz for the win with a couple of laps to run. Pommerstein ended up third from Smith, Richard Fuller and Nicolas Spanoyannis, while Brittz marched off with the overall win for the day from Habig, Pommersheim, Liebenberg and Hammond. Richard Fuller took Masters honours from Philippe Chapat, Carlo Gil and Acquaah.

Durban visitor Dominic Lincoln (Birel ART) was in dominant form in Rotax Senior Max, where he trotted off to a trio of wins over Benoni lad Wayland Wyman (Kosmic) while CRG duo Joshua Dias took two third places and returning East London lass Shannon Jackson one after Vereeniging lad Dias did not start the final. Jackson ended up third for the day ahead of Farhaan Basha, Ian Allnutt and Ewan Taylor.

Under-13 Mini Max saw a strong field take to the track, but it was Josh Le Roux who took the day overall on his Praga with two race wins to one over Jordan Brooks (Birel). Joshua De Paiva (TonyKart) likewise shared third places two to one with Reece Fuller to take the final podium spot over Fuller, with Mandla Mlangeni fifth from Troy Snyman.

There was another significant 17-kart entry for under-11 Micro Max, but nobody was going to stop SA champion Muhammad Wally (Praga) from delivering a trio of wins to take the day over Kosmic duo Joshua De Paiva and Troy Snyman, who fought over the second and third places through the day. Wally qualified third and spent most of race 1 watching his rivals fight it out before pouncing to take the win with a couple of laps left to race. He was untouchable in race 2, but had to fight de Paiva off in the final, while Luviwe Sambudla drove to fourth overall from Kyle Beukes, Bjorn Bertholdt, Moosa Kajee, Hriday Pooren and Mohammed Moerat.

Last but very much not least, little Tshepang Shisinwana took a closely fought under-8 Cadet win for the day with a pair of race wins over race 1 winner Cyril Jacobs. Aadam Kajee was third after scoring a couple of second places in the races ahead of Troy Van Der Laan, Anesu Maphumulo and Goran Gruben.