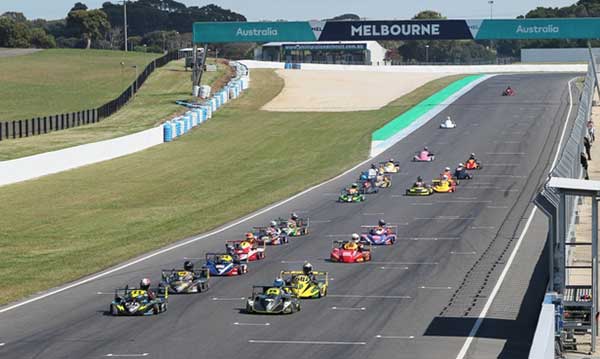 The 2018 Victorian Superkart Club Championship kicks off on February 10 at the iconic Phillip Island Grand Prix circuit where top speeds of around 250kph and lap times of 1:30 (average) around this 4.1 km track are expected.

The club will welcome Russell Anderson, builder of Anderson Karts, to the first round as he does a “recce” for a possible European Invasion later this year.

The off season has been a game of musical chairs with several drivers changing classes and stepping up into faster machines.

Among these are Russ Occhipinti (five-time driver of the year) to 125cc Gearbox, and Tim Clarke and Calvin Wilkie to 250cc National. Bobby Jane and Brayden Bailey have both moved to 125cc Gearbox while Rod Clarke will step into a Stock Honda every now and then.

With so many Rotax drivers now vacating the class for the gearbox categories, the club will try and focus on re-building the Rotax numbers. Racing in this class is very good and competitive with loads of advice and help on hand on race day.

If you’re a Rotax driver, even pre-Evo, and would consider racing on full size circuits like Phillip Island and Winton, please feel free to contact the club for all the help you’ll need to make the transition.

The year ahead looks exciting and events will be covered here on KartSportNews.