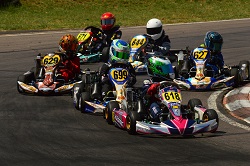 The Northern Regions Karting Championship kicks off on the 17th of February 2018 at Zwartkops International Kart Raceway hosted by Rand Kart Club. Close racing is expected across all classes with the possibility of a few upsets with new competitors moving up in the various classes.

First up will be the Cadet Class for competitors from 5 to 8 years. The front runners are likely to be Tshepang Shisinwana , Cyril Jacobs and Adam Kajee with a few new competitors expected to upset the applecart.

Next class up will be Micro Max which will likely be the biggest class with a slew of competitors moving up from Cadet plus the big field that was already taking part remaining in the class for another year. Micro Max is open for competitors aged from 7 to 11 years old. Likely front runners will be Mohammed Wally, Joshua De Paiva, Mohammed Moerat and Kyle Beukes with at least another 5 or 6 karters ready to challenge for the lead. This will without a doubt be a very hard and closely fought class.

Next up will be the Mini Max class which is for competitors between the ages of 9 to 13. With quite a few competitors moving up to Junior Max class it is not yet known who the front runners will be but undoubtedly the man to beat will be Josh Le Roux. Mandla Malingini, Reece Fuller and Troy Snyman could also upset the applecart. Don’t be surprized to see some of last year’s front runners making a comeback in order to qualify for the Rotax Grand Final in Brazil!

We move on to the very fast and competitive Junior Max class which is open to competitors aged between the ages of 12 to 15. Likely front runners will be defending class champion Jayden Els, Cameron Dias, Tiffany Napier and the new guns to the class Leyton Fourie, Jarrod Waberski and Ethan Coetzee moving up from Mini Max with a few others likely to get stuck in to try and go for the top spot. Junior Max nationals in 2018 promises to be awesome.

Next up we take a look at Senior Max for competitors aged 14 and up. Likely front runners will be Joshua Dias , Shannon Jackson, Carlo Olivier and Wayland Wyman with a few others likely to challenge for top spot.

The regional race days start with free practice followed by qualifying and then 3 races for each class. If you enjoy close racing with non-stop action then Zwartkops International Karting Raceway is the place you want to be at on the 17th of this month. There is plenty of seating for spectators from which you can see almost all of the track which means it is non-stop action all the time. And the best part is there is no entrance fee so bring 1 bring all and come enjoy a day filled with racing action. We hope to see you all on the 17th until then be safe and keep it on the black stuff!