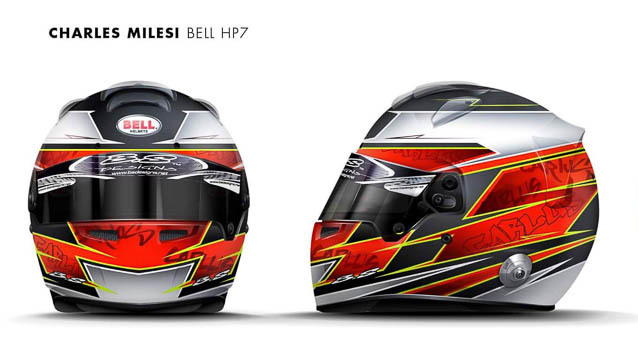 The countdown has begun for Charles Milesi, who is preparing to contest a 2018 season that will be very important for the rest of his career, in the Eurocup Formula Renault 2.0. The first official winter tests confirmed that the 17-year-old Frenchman will be one of the drivers to watch closely in the race for the podium. Recent news from Charles Milesi also concerns the signing of a partnership agreement with the world-famous helmet brand, Bell Helmets. A prescient recognition…

The 2018 events have not yet started, but the upcoming racing season is already on everyone’s mind. Charles Milesi knows that all too well and has already been preparing for several weeks. On the one hand, he travelled to Australia to compete in the 2018 Castrol Toyota Racing Series, which runs from mid-January to mid-February. “It was a very rewarding experience on cars different from what we know in Europe, with a monocoque close to an F3 and a Toyota 1800cc engine.” Excellent positions and a top three rewarded his efforts against drivers accustomed to Australian circuits.

On the other hand, he intensified his physical and mental training with Simumotion’s Julien Abelli, not forgetting the dietary aspect. “Charles arrived at Hockenheim for the Formula Renault official test,” said Julien. “The constraints of the FR 2.0 did not cause him any problems. He had the opportunity to complete a race simulation and showed great consistency, in addition to his speed.”

Already on the pace
In Germany on 14th-15th March, Charles Milesi joined the R-ACE GP team, with which he has already raced in Formula Renault in 2017. “I feel well integrated with Thibault De Merindol’s team,” said Charles. “The working environment is very professional. I think I have all the tools I need for a great season.”

On the first day, he had a great day to finish 6th out of a total of 28 cars, less than four tenths away from the fastest time. The next day, while the weather was mild, he kept to his work plan and kept his place in the first quarter of the hierarchy.

Bell partners with Charles
At Le Castellet, on the Paul Ricard circuit from 13th to 15th April, the Eurocup Formula Renault season will open. Two days of testing are planned, the opportunity to confirm Charles Milesi’s high level of performance, without failing to implement the advice of his sponsor, the famous driver Anthony Beltoise.

Subsequently, the promising French driver will have the opportunity to progress on legendary motorsport circuits: Monza, Silverstone, Monaco, Red Bull Ring, Spa-Francorchamps, Hungaroring in Budapest, Nürburgring, Hockenheim and Barcelona! A beautiful showcase for his partners. Among them, we will see the Bell Helmets brand with whom Charles Milesi has just signed a contract for 2018 for the official supply of his helmets.

The young French single-seater hopeful will also carry the colours of LRS Formula, a company specialising in driving courses (F1, FR, GT) and triple Formula 1 cars on the most beautiful European circuits!

Many signals are decidedly green at the dawn of the Eurocup season!