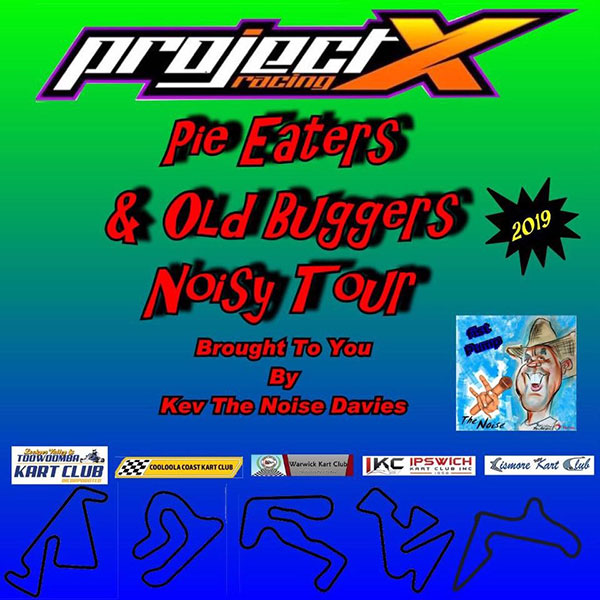 by Kev “The Noise” Davies

I have a series running for TaG Restricted Mediums & Masters as they wanted big numbers. So, for your interest after round two held recently at Ipswich, here’s a report!

The classes, and all the drivers in them, have nick names:

In the Pie Eaters

Rodney Rudy has jumped into a 38 point lead, right on his tail is the the fluro man WELZIE! A further 28 points behind is The Cleveland Steamer (don’t Google it) and still chomping at the heals of the leading three is the Dalby flyer Bettsie just 47 points behind Scotty. Just 5 points divides 5th & 6th and even though Satts holds 5th at the moment Kimi ‘buddah’ Mathers has shown incredible speed but been dealt some extraordinarily bad luck in both rounds! Things could really get a shake up at the next round fighting it out just behind them are fast Freddie, Hightower, The Big T and The Enforcer. It’s really taking shape this series and we’re having a blast!

In the Old Buggers

Rabby has launched to a massive 73 point lead! He’s been in blistering form and trying to race away with this championship right from the B of the Bang! In second and chasing hard is Eddie Watt on 342 points. Just 7 points off the top two is Gavarni and in red hot form again now. Eddee Wot is leading the rest of the chasing pack on 272 points trying to close in on the top 4 are the hard charging Tezza (our technical director) Big Pugs, Shano and B2. As a few of boys opted out of round 1 their points total is deceivingly low but after everyone’s worst round is dropped they could be right up there!

Tune in for the next round @ Cooloola Coast Kart Club on August 3rd.