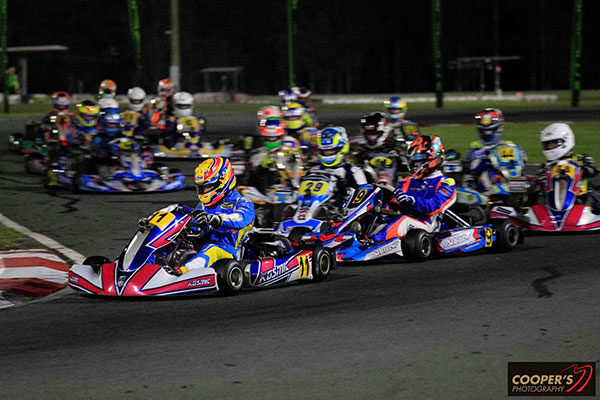 In what was the first night race to take place on the 2019 Pro Tour calendar, and Ipswich delivered. With questionable weather as the dinner break commenced the rain held off for the finals to be contested in perfect conditions.

Saturday consisted of Heat 3, Pre Final and Finals and the racing was second to none. Racing kicked off after the sun had set and it was a sight to be seen.

“The night race is something different for spectators and drivers, it feels and looks faster and it was an awesome addition to the calendar” said Ipswich Kart Club President, Scott Howard.

In Micro Max it was Jaxson & Jenson Burns who worked together throughout the final pushing one another to maintain the the top two places in the championship. Both spent time leading the race but it was our Round 2 winner, Jaxson who took out yet another blue plate and extended his championship lead over brother Jenson.

The battle is far from over between the twins and with three rounds to go and one more state title up for grabs Jenson has his eyes set on securing his first blue plate before the end of the season. Making it a Zed Corse podium lockout was Isaac McNeill who battled most of the race with James Anagnostiadis.

In Mini Max it was a heart breaking ending for Max Walton who raced wheel to wheel with Aiva Anagnostiadis battling for third but when an on track incident caused the two to come together Walton unfortunately dropped a chain, on the last corner of the last lap and was forced to limp his way to the chequered flag. Walton was definitely the hard charger of the weekend and a one to watch as we approach the second half of the season.

Costa Toparis crossed the line first with Jake Rutkowski and Sebastian Manson completing the podium. Manson was the 2018 South Australian State Champion and this was Rutkowski’s first podium since making his debut to the Mini Max category. The results from this class are still provisional at the time of publication.

Luke Pink drove away in Junior MAX for yet another round win and blue plate to add to the collection. The Praga Kart driver now has a 597 point lead over William Seal. Seal secured third place in Saturday nights final in the dying stages of the race after a tough weekend. Local driver Ethan Feather was involved in an on track incident which left him crossing the line in 17th position.

New Zealander Clay Osbourne came second at the QLD State Title event and will be looking to go one better when the Rotax Pro Tour visits Puckapunyal in June. Regular front runner, Tom Williamson Motorsport Driver Beau Pronesti crossed the line in seventh and currently sits fourth in the points. New comer and one of only two females contesting the class, Breanna Morris made her mark for TF Race Engines finishing an impressive 7th place.

In Rotax Light it was TF Race Engines drivers Tyler Howard and Pierce Lehane who set the pace early in the weekend with Howard securing pole position. Lehane went on to win the weekend but it wasn’t an easy battle to the chequered flag with Cody Gillis and returnee Patrizicorse driver Ryan Wood who locked out the podium. Ben Jurczak saw a return to form at his home track over the weekend where he crossed the line in fifth place.

Whitmore, who entered the weekend second in the points, unfortunately struggled to find pace but luckily has only slipped to third in the points chase, however Howard has narrowed the gap. With the double points round to end the series it really is anyone’s game entering the second half of the season.

We’ve said it before, we will say it again, Rotax Heavy has continued to go from strength to strength in 2019. With the inclusion of many locals, new comers and past champions the class was the most competitive to circulate the 1080 meter circuit. In the end it was “Box Trailer Racer” Regan Payne who took out the weekend over fellow Queenslanders Lane Moore and Kris Walton. Moore maintains his lead at the halfway point of the season aboard his #1 CRG Kart and will be hoping to back up his 2018 performance as we work our way to the second half of the season. Rotax Heavy drivers are battling it out for Rotax Max Evo Engine, Lucky Design Arai Helmet and IKD Voucher up for prizes at the end of the year.

Troy Morrissey was in the box seat for his first podium before an on track incident forced him off track and trekking through the grass to rejoin the race. Opening rounds winner Jonathon Marcusson struggled to find pace throughout the weekend and could only salvage 6th place at the conclusion of the night race.

It was an emotional win for the Ipswich Kart Club President Scott Howard in DD2 Masters. Howard, who ran the number 13 this round for good mate Stu Marshall, was desperate to cross the line in first place and get the win for Stu who suffered head injuries after a nasty speedway crash in New Zealand. Both Dale and Fiona Verrall felt the emotions as their DPE Kart Superstore backed driver took the chequered flag ahead of long standing rival Kris Walton.

“It meant more than a blue plate and I’m stoked to be able to get this one for Stu” said Howard. Both Howard and Verrall were New Zealand bound first thing this morning (Sunday) to check in with Stu and deliver the good news first hand. Troy Bretherton made it an Ipswich Kart Club members podium lockout with Danny Wright and newcomer Fraser Hart rounding out the Top 5. Walton still leads the points over Bretherton but it was Howard who jumped from 9th up to 3rd after securing the win and his first State Title for 2019.

The Sparco Rotax Pro Tour next visits Eastern Lions Kart Club (Puckapunyal) in June followed by Warwick and the season finale in Albury.

The year is far from over, with double points on offer at Albury the season, the world final tickets and the championship is still up for contention. All photos throughout the weekend are courtesy of Coopers Photography.