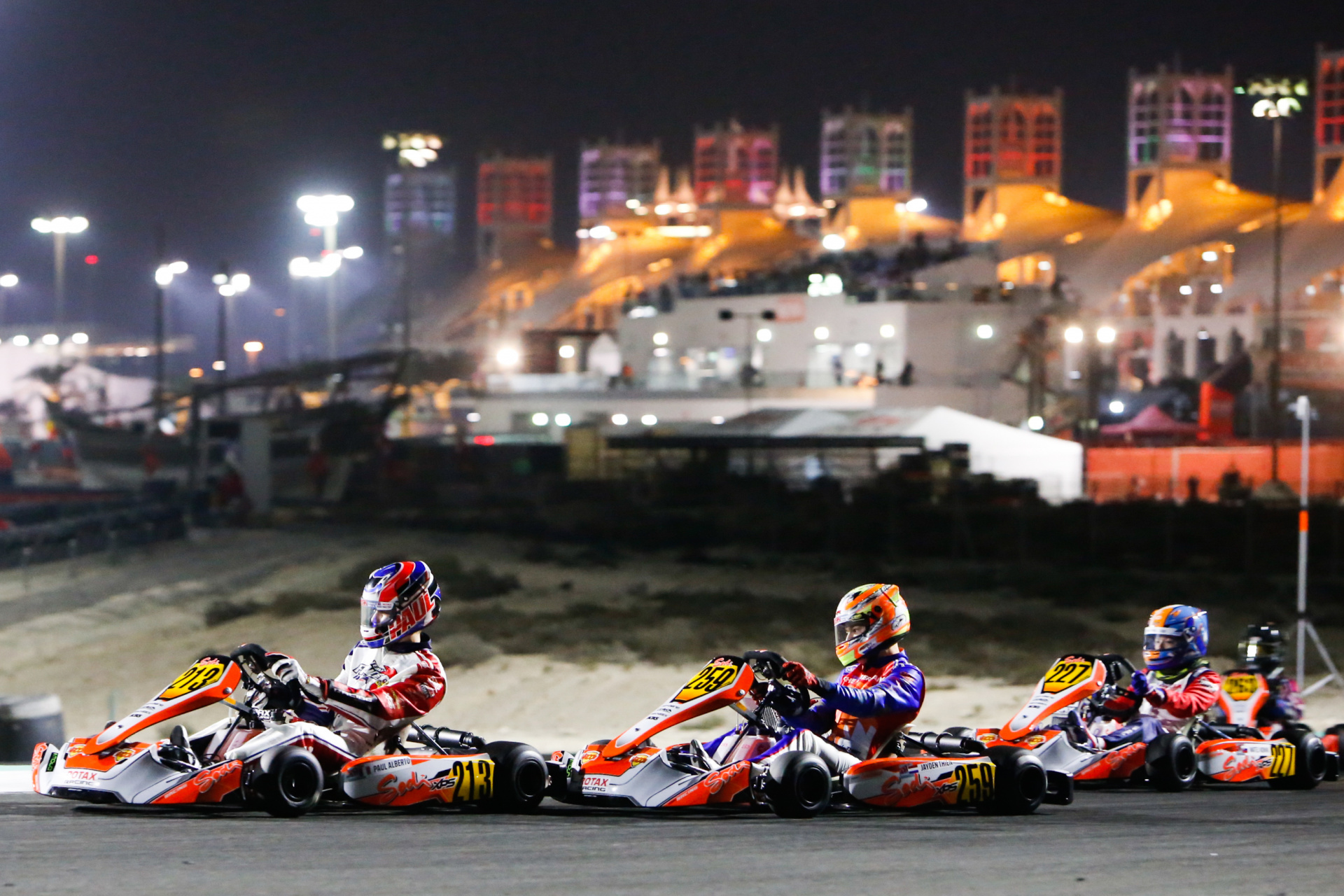 0
0   0
The beginning of these NQ-practices have been scheduled very late so that the racers had the opportunity to drive in the floodlight for the first time in this week.

But first we make some steps back to the Welcome Get-Together which took place yesterday evening in the Formula 1 paddock of the Bahrain International Circuit (BIC). The event saw a fantastic cavalcade of people celebrating the beginning of the RMC Grand Finals with a fantastic spirit of community. This also included a wonderful banquet of food in a stylish ambience which was completed by Bahraini live music.

Today we started with the first NQ-Practice sessions and this evening also saw the NQ-Practice 3 under the floodlights for the very first time in the history of the RMCGF, with the 1.414 km circuit providing another new spectacle to the event. With a very busy day at the racetrack, temperatures would be anywhere between 20 and 23 degrees Celsius, even during the first track action under the nighttime sky.

Along with the action getting underway, we have a very welcome visitor in the form of FIA WEC LMP2 World Champion Ferdinand Habsburg, who will stay with us for some days.

We will keep you up-to-date about the happenings at and around the racetrack with our Daily Reports, our Social Media postings and stories and with our videos from this amazing event on the YouTube Channel. Don’t miss our Live Stream starting from tomorrow, Tuesday 13th, 2021 with the first Live Studio at 17:00 (local time).

Let’s have a look at the first practice sessions of this week:

E20:
The first free practice session started the official action of the 2021 Grand Finals at 10:28am, with 10 of the 18 drivers setting a registered lap time, as Denmark’s Victor Nielsen in the #703 was able to push to a total of eight laps in the session, posting the fastest time of 56.397 seconds.

Sweden’s Mathilda Olsson and Finland’s Aleksi Jalava rounded out the top three, who covered by just 0.452 seconds, after a 15-minute exploration around the track. Olsson would respond accordingly in the second session with a 55.908, as the Swede would edge out Nielsen for the top spot by just 0.044 seconds, with Jalava again completing the top three. The Finn, who posted a 56.107, was followed by both Thierry De Jong (Netherlands) and Ellis Spiezia (USA), thereby completing the top five.

Theo Kekati (UAE) made it three different drivers to take the top spot in the final free practice session of the day, as the #708 would post a 54.108 under the floodlights and night time sky for the first session of the RMC Grand Finals in 2021.
Poland’s David Aulejtner would be 0.053 seconds off the Emirati driver with a 54.161, as Oscar Pellemele from France (54.210) took third place, as the top 12 drivers were split by 0.705 seconds.

Micro MAX:
Hungary’s Nimrod Nogradi was able to use the entire first 15 minutes of practice to top the times in the first session of practice, completing 13 laps in the process. The #5 driver set a 1:01.124 second lap time, 0.516 seconds in front of Great Britain’s Albert Friend.

Mini MAX:
The Mini MAX field for the 2021 Grand Finals has been doubled for the very first time since they joined the ranks from 36 to 72 drivers, with plenty of great young talent here to compete.

In the Odds group, Belarus’ Mikita Siniabok led the way in first practice with a 58.641 second lap time, in a very closely-fought first free practice session with 24 drivers covered by less than a second. Rounding out the top three were Russia’s Artemiy Meinikov and Poland’s Jan Meissner, with them both 0.098 and 0.289 seconds behind Siniabok respectively.
In Evens, the Netherlands’ Mees Houben was fastest with, hitting a benchmark of a  58.722 second lap time, ahead of Belgium’s Mateja Radenkovic and Lebanon’s Christopher El Feghali, with the top three being no more than a fraction of two tenths apart in total.

The second session for both groups saw Siniabok once again lead in Odds with a 58.629, leading both Bahrain’s Luca Houghton (58.648) and Great Britain’s Scott Marsh (58.795). It was a repeat for the fastest driver In Evens, as Houben would again top the time sheets with a 58.675, with the Dutchman being almost equalled on lap time by Poland’s Borys Lyzen (58.712) and Lithuania’s Markas Silkunas (58.759).

Borys Lyzen (Poland) was the quickest of the eFeghali from Lebanon (58.496). Another Dutch driver would hit the top three on this occasion, this time it being Mika Van De Pavert who posted a 58.624.

The quickest driver in the Odds group first free practice of the 72-strong grid for Junior MAX was Bruno Mulders from the Netherlands, who was fractionally faster (0.011 seconds) ahead of Belgium’s Kaï Rillaerts. He was followed by Lithuania’s Maxim Shchurko, as 34 drivers were just under 1.5 seconds apart from each other.

It was a Latvian 1-2 in the first practice sesson for the even-numbered drivers, as Tomass Stolcermanis and Edgars Vilcans were separated by 0.159 seconds after 15 minutes. Rounding out the top three was Gaston Irazu from Greece, where gaps in the session did not exceed any more than a tenth of a second between the drivers from second to 28th.

Practice two for the Odds had another fastest driver after the 10-minute session, as Enzo Bol (Netherlands – 54.958) edged out Maxim Shchurko (54.967) by 0.009 seconds. Grest Britan’s Ethan Jeff-Hall was in the top three, a further six thousands adrift.

Latvia’s Stolcermanis topped the second practice in Evens, setting a 54.624, ahead of Germany’s Farin Megger (54.793) by 0.169 seconds, followed by France’s Pacome Weisenburger (54.816). The top three in this session were covered by less than two tenths of a second.

Mulders would again hit the top time of the Odds final practice session of the first day of running with a 54.741, 0.035 seconds ahead of countryman Jayden Thien (54.776). France’s Teo Blin rounded out the top three, pushing the Sodikart underneath to a 54.892.

Stolcermanis showed consistently good pace to round out a good day of practice in the final  session of the Evens, as he would go on to set a 54.558, 0.058 seconds in front of France’s Weisenburger. Germany’s Raphael Rennhofer made it into the top three following a best effort of a 54.664, which meant the trio would be covered by 0.106 seconds.

Lachlan Robinson in the #307 from the UAE was quickest in the first session for the Odds in Senior MAX (54.219 seconds), 0.039 ahead of Hungary’s Zsombor Kovacs, with Bahrain’s Lewis Smith competing the top three (54.296). The session saw 31 drivers covered by a mere 0.954 seconds, showing the ultra-competitive nature of the class.
In Evens, Tereza Babickova (Czech Republic) was fastest in first practice on a 54.096, followed closely by Estonia’s Ruben Volt (54.234) and Argentina’s Francesco Grimaldi (54.284).
With track evolution steadily increasing over the course of the day, Great Britain’s Callum Bradshaw would push the pace up by topping the second session for the Odds with a 53.821, with Zsombor Kovacs (53.873) again running in the top three for the second successive time in a row. It was another Briton in the top three, courtesy of Rhys Hunter (53.891), a further 0.018 seconds away from the Hungarian in second.
Tereza Babickova (Czech Republic – 53.826) would again be fastest in Evens for the second session of the day, with France’s Paul Fourquemin taking second place with a 53.901. Great Britain’s Mark Kimber (54.014) took third place, fractionally ahead of countryman Sean Butcher (54.071).
It was another good session in the third practice session for the Odds for Lachlan Robinson, who again rose to the top posting a 53.724, closely followed by Callum Bradshaw (53.745) and Japan’s Futa Kojima (53.818) who were the top three.
But Mark Kimber pushed the bar even higher to post a 53.608 in the third practice session for the even-numbered drivers, with Clayton Ravenscroft making it a British 1-2 in the process (53.730). Fahad Al Khaled was just under a tenth off Ravenscroft, with a 53.815 putting the Kuwaiti driver into third.
Senior MAX will be back on track for Non-Qualifying Practice 4 at 10:01 AST ( 08:01 CET) tomorrow with the odd numbered group going out first.

DD2:
France’s Antoine Barbaroux (53.227) would edge out the Netherlands’ Martijn Van Leeuwen (53.257) for the top spot of the timesheets in first free practice in Odds by a mere 0.030 seconds, with Vasileris Dimitris from Greece posting a 53.345 to round out the top three.

In the Evens group’s first practice session, Austria’s Philipp Motizi was fastest (53.274), followed by Brazil’s Leonardo Reis (53.537), who was only 0.083 seconds away from posting the fastest time. Axel Saarniala from Finland (53.393) was also showing good pace over the 15 minutes, where top three were covered by a mere 0.119 seconds.

The second session for Odds would see Greece’s Dimtris fastest with a 52.825, followed by Van Leeuwen, who was 0.208 seconds behind. Poland’s Dawid Maslakiewicz (53.120) would narrowly secure third place from Chile’s Gustavo Suarez by 0.001 seconds.

Canada would see one of their drivers head up the second session for Evens, as Gianluca Savaglio (53.171) took top honours in front of Slovenia’s Xen De Ruwe (53.252) in a session that saw the top four rounded out by 0.087 seconds, courtesy of Sweden’s Charlie Andersen (53.232) and Austria’s Philipp Moitzi (53.258).

The final practice session of the day for the Odds saw Van Leeuwen take the top spot on a 52.538, with France’s Barbaroux making it another delve into the top two positions following a 52.816-second lap time. Maslakiewicz (52.827) would take another strong third place in two sessions, narrowly missing out on second by 0.011 seconds.

Latvia’s Patriks Noels Locmelis would also make some headway under the floodlights bathing the circuit, putting the #446 at the top of the times for the final session for the even-numbered drivers, posting a 52.750, ahead of the Czech Republic’s Jakub Bezel (52.823) and Moitzi (52.830) rounding out the top three.

DD2 will be back on track for Non-Qualifying Practice 4 at 10:40 AST ( 08:40 CET) tomorrow with the odd numbered group going out first.

Morgan Riche was fastest of all 36 drivers in the DD2 Masters class in their first practice session, but it was close (0.029 seconds) between both the Frenchman and Canada’s Pier-Luc Ouellette, who posted a 53.752 and 53.781 second lap time respectively. The USA’s Derek Wang was not far behind, as the #522 got his Praga up to third on a 53.962.

It would be the turn of Matias Rodriguez to post the fastest time in session two with a 53.571. The Argentinian would be only 0.052 seconds ahead of Ouellette, whilst Finland’s Antti Ollikainen (53.668) made it three drivers covered by less than a tenth of a second at the end.

Riche from France would also again top the times in the final session under the night sky, putting in an effort of a 53.244, ahead of Bahrain’s Mohamed Matar (53.478), whilst Pier-Luc Ouellette (53.478) had kept the pace consistent throughout the day to not be outside the top three once.


Stay tuned for our upcoming daily reports, which bring the intense and exciting on-track action of the RMCGF to you! 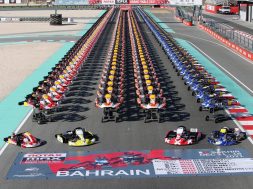 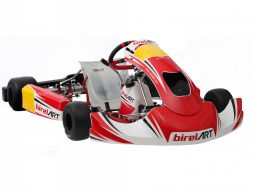 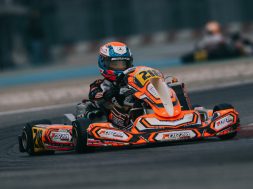