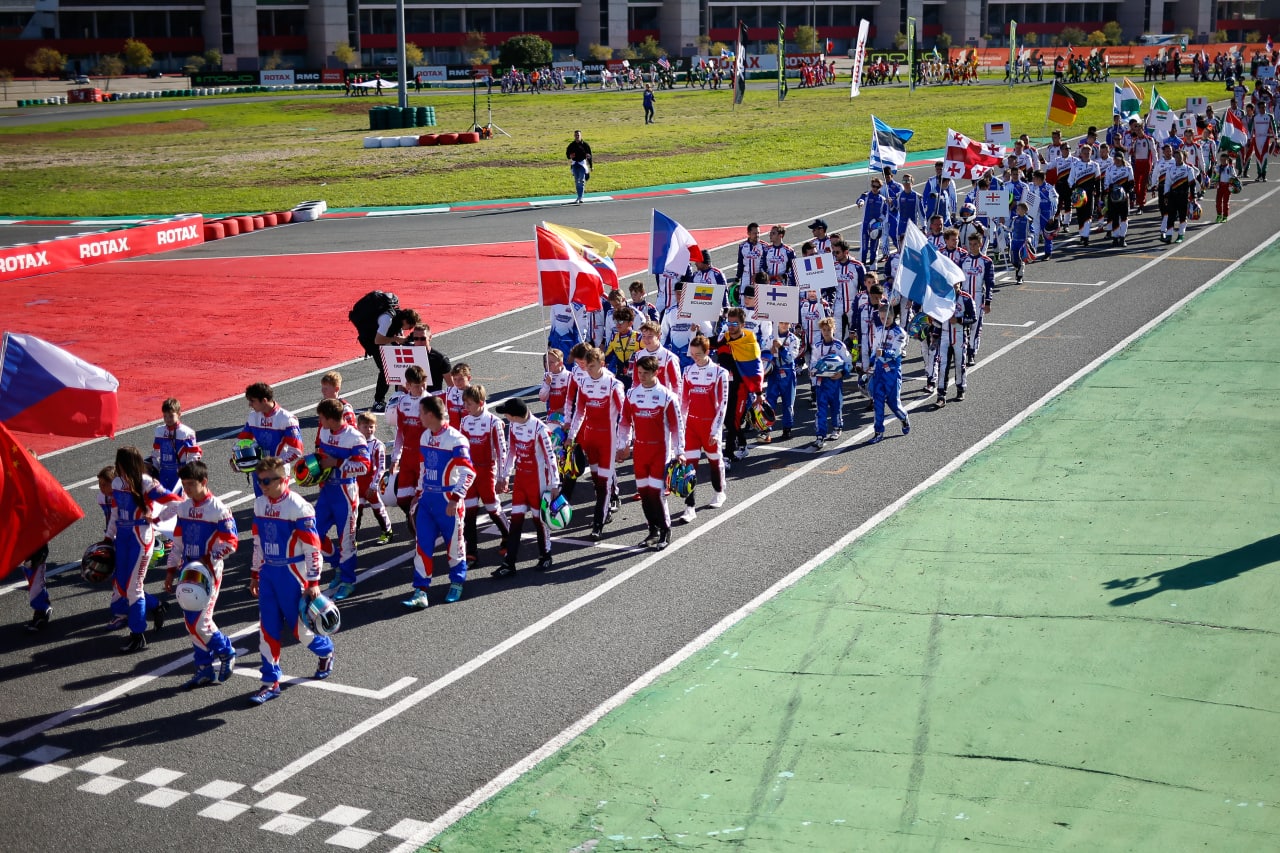 0
0   0
394 Rotax racers came along the main straight, walking in their race suits for the drivers parade followed by the teams of BRP-Rotax and the Chassis Partners for the drivers picture at the Grand Stand. It was the highest number of drivers and nations in the history of the RMC Grand Finals and we can not get enough of this stunning view.

After the lunch break, the first pre-finals started and we enjoyed a lot of thrilling race action throughout all the categories. What an action-packed race day! – The starting grid for tomorrows’ finals at the 22nd RMC Grand Finals is fixed and we can’t wait to be back on track tomorrow morning.
A number of drivers has to leave us today and we want to congratulate for their great racing this week and wish them good luck for the next season. Maybe we’ll meet you again at the next RMCGF! – Stay tuned, tomorrow we will tell you where we will race in 2023.

And there was a special announcement of BRP-Rotax during the press-conference this evening in the Rotax Club: the launch of a new e-powertrain, the Rotax E10. For more information about the latest addition to the BRP-Rotax product portfolio, please visit our website www.rotax-kart.com/news-overview

But now coming to the action on the track today:

Sweden’s Joel Bergstroem (#613) would continue his unbeaten run of wins in the 10-lap Pre-Final, but would not have it easy to take the win. He would get severe pressure from behind, but he would not crack under it, taking the victory by 0.190 seconds from Slovakia’s Michal Soltys, as the rest of the top six would be covered by just under 1.3 seconds.

Belgium’s Tijs Daems (#605) would also have to defend for quite a while, but stayed the course and determination saw the youngster complete the top three. Tomasz Ibsen (#603), Adam Sydor (#611) and Jan Stencel (#607) would see a lock out of the remaining places in the top five for Poland.

It was incredibly close all race long, which was neutralised due to a full course yellow with two laps to go, with the top ten only 3.528 seconds apart that was rounded out by the Netherlands’ Thijs Stevens (#601).
Bergstroem has a perfect score this far, as Ibsen and Daems round out the top three overall heading into tomorrow’s Grand Final, which takes place at 10:21 UTC (11:21 CET).

It was more joy in the Swedish camp, as Jesper Sjoeberg (#706) kept a tight hold onto his perfect record, keeping a very-close field at bay, as after ten laps he won the Pre-Final by just 0.183 seconds ahead of Germany’s Luca Koester (#711), who initially took the lead at the start.

It was an even-closer affair for the 18 drivers, as Canada’s Griffin Fowler (#714) took third, with Lebanon’s Matthias Njeim (#702) having his progress stopped due to the full course yellow meaning he would finish fourth in front of Spain’s Raul Vargas (#717), who started third.

Sjoeberg is the clear favourite in this, but there are also several other drivers that will be in the mix that could take the fight to him in tomorrow’s last race. That takes place tomorrow at 10:52 UTC (11:52 CET).

It’s advantage to the UAE’s Maxim Bobreshov (#32) in an action-packed encounter over nine laps, as he would take the win by 0.970 seconds, ahead of Lithuania’s great hope in the form of Majus Mazinas (#22) and Poland’s Kacper Rajpold (#13). New Zealand’s Marco Manson (#9) was in contention for the win, but would have to settle for fourth, ahead of Great Britain’s Albert Friend (#8).

The race saw plenty of overtaking, where anyone out of most of the field had a chance for the win, as Finland’s Oiva Vettenranta was sixth in the #5, being closely followed by Jenson Chalk (#18 – GBR), Taigen Sakano (#2 – JPN), Branislav Rentka (#15 – SLO) and Serbia’s David Matlak (#12). There were also some drivers making some significant progress during the race, as Lithuania’s Ainis Vibriantis (#30) moved up 15 places to take 12th, with Canada’s Brando Londono (#20) finishing in 17th, gaining 14 spots in the process.

Mazinas still leads on points, but that part of the competition goes out the window for the Grand Final tomorrow morning. It’s very difficult to pick who could win this class, but anything is possible in racing. The Micro MAX Grand Final gets underway at 11:36 UTC (12:36 CET) tomorrow morning.

El Feghali remains unbeaten, but will that still stand the test of time after tomorrow’s adventeture into the unknown? The Mini MAX Grand Final commences at 12:23 UTC (13:23 CET) tomorrow afternoon.

Marsh is on pole position for tomorrow’s grand finale, but who will be his biggest challengers? The Junior MAX Grand Final gets under way at 13:47 UTC (14.47 CET) tomorrow afternoon.

Great Britain’s Kai Hunter (#369) led home a British 1-2-3 in the first Pre-Final, which also saw Brazil’s Eduardo Barrichello (#346) complete a very tight top four drivers, who were covered by just over six tenths of a second. Callum Bradshaw (#358) and Sean Butcher (#304) would also decide to play it safe and conserve their tyres and have a good strategy ahead of tomorrow. Spain’s Guillermo Pernia Diaz (#353) and Belgium’s Kai Rillaerts (#313) would lead the way for the next battle, as they took fifth and sixth in front of Japan’s Kenta Kumagai (#305) and Fuji Kishi (#307), whilst Norway’s Theo Eriksen (#339) and France’s Ethan Pharamond (#345) completed the top ten.

It’s a British 1-2-3 with Hunter leading Bradshaw and Gilbert going into the Grand Final tomorrow. Will Team UK defend their title again? The race gets underway at 14:36 UTC (15:36 CET) tomorrow afternoon.

Mark Kimber (#452 – GBR) would control proceedings in the first Pre-Final, doing everything right to take the win by 0.591 seconds ahead of Slovenia’s Xen De Ruwe (#413). Jakub Bezel (#456 – CZE) would put himself clearly into contention by taking third, despite being over 3.1 seconds behind the eventual race winner. Austria’s Philipp Moitzi (#442) secured a well-earned fourth place, whilst Nicolas Picot (#417 – FRA) completed the top five.

Glenn Van Parijs (#471 – BEL) showed a cool-headed performance to secure the win in the second Pre-Final, but it was a slight closer affair over the 14 laps, where the top 12 drivers were covered by less than 10 seconds at the finish. Petr Bezel (#446 – CZE) was third, ahead of France’s Paolo Besancenez (#441), who has showcased one of the best, if not the best comeback in RMCGF history. Kris Haanen (#472 – NED) was looking good for a top three finish, but he would have to settle for fifth.

Kimber is the one that could write a piece of RMCGF history tomorrow, as he looks to become the first driver to win a Grand Finals title in three different classes. But he won’t have it easy, as several other drivers will try to deny him of overall glory. The DD2 Grand Final gets underway at 16:14 UTC (17:14 UTC) tomorrow afternoon.

Paul Louveau from France was able to control the Pre-Final, as the #518 would take the win after 14 laps by 1.963 seconds, in front of Lithuania’s Martynas Tankevicius after 14 laps. Kristaps Gasparovics (#533 – LAT) took third by around half a second from Italy’s Claudio Pagliarani (#513), who scythed his way up the order from 21st place, as the USA’s Derek Wang (#523) completed what was a very close top five.

Even with Louveau leading the standings in after the Qualifying Heats and Pre-Finals, it all comes down to one moment where someone will be triumphant tomorrow. The DD2 Masters Grand Final will start at 15:25 UTC (16:25 CET) tomorrow afternoon.

Don’t miss the live stream tomorrow – we are going to crown the champions of the RMC Grand Finals 2023 and can expect a day full of action on and off the track! In the meantime, read the reports of the last days or watch our great videos at: grandfinals.rotax-kart.com/news 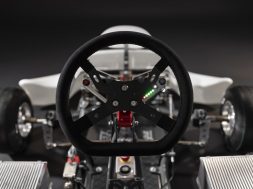 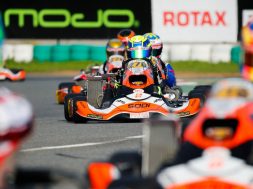 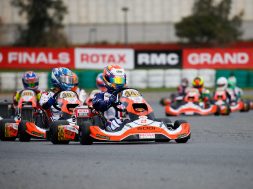