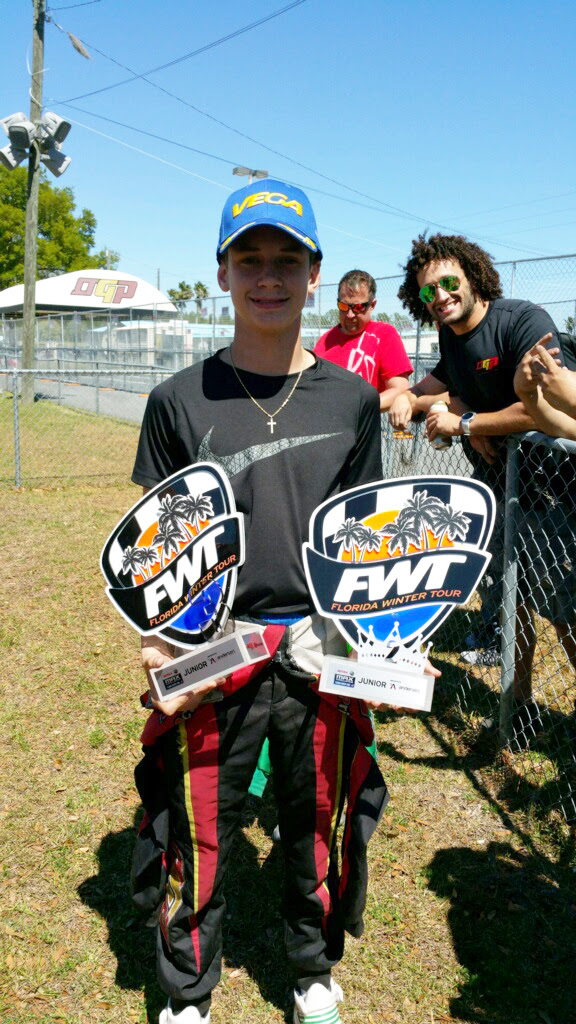 From a very young age, the sport of kart racing is all that Florida resident Dylan Gennaro has been passionate for. 2017 was a breakout season for the youngster as he was a consistent front-runner in multiple regional and national programs, but now, at the start of the 2018 season, Dylan is looking for a new program. Parting ways with the Ocala Gran Prix race team earlier this week, the two-time Florida Winter Tour Vice Champion is actively looking to compete next weekend at the opening round of the ROK Cup Promotions Florida Winter Tour and onwards into 2018.
“I would like to thank Jorge Arellano and everyone from Ocala Gran Prix for all of their hard work and support over the past ten years,” explained Gennaro. “Without Jorge and his staff, I would not have been able to race at the level I have and would have not had the opportunities that were presented to me. I would personally like to thank each and every mechanic, tuner, driver coach and engine builder that has come through the OGP program, and helped me one way or another. I would like to send an extra special thank you to Chad Dokken for personally taking care of me and my equipment during the previous seasons.”
Showing great speed in 2017, Gennaro claimed both the Vortex ROK Junior and Rotax Junior vice championships at the popular Florida Winter Tour. In Superkarts! USA competition, the Floridian was one of the SpringNationals hard chargers gaining sixteen positions in the main event to claim a solid fourth place result. Backing that result up at the SKUSA SuperNationals, Gennaro claimed a top-ten finish after some contact in one of the heat races.
Gennaro added, “I don’t mind working hard to race. I can build karts, driver coach young kids as well as help set up and tear down tents. 2018 will be my final year in the junior ranks and I know that I can fight for race wins and championships across each and every series of competition.”
While 2018 plans were to compete at the Florida Winter Tour and Superkarts! USA Pro Tour, Gennaro is hoping to add these events as well as some World Karting Association Manufacturers Cup and United States Pro Kart Series races to his efforts.
For more information on Dylan Gennaro, please contact Eddie Gennaro at 352.427.8421 or via e-mail to KartNut@gmail.com.
tags: DYLAN GENNARO Ocala Gran Prix
previous RNW and KNW welcomes Charles Côté as new editor in chief
next BRP-Rotax Chinese Kart Product Distribution Assigned to Eric Motorsport Supply