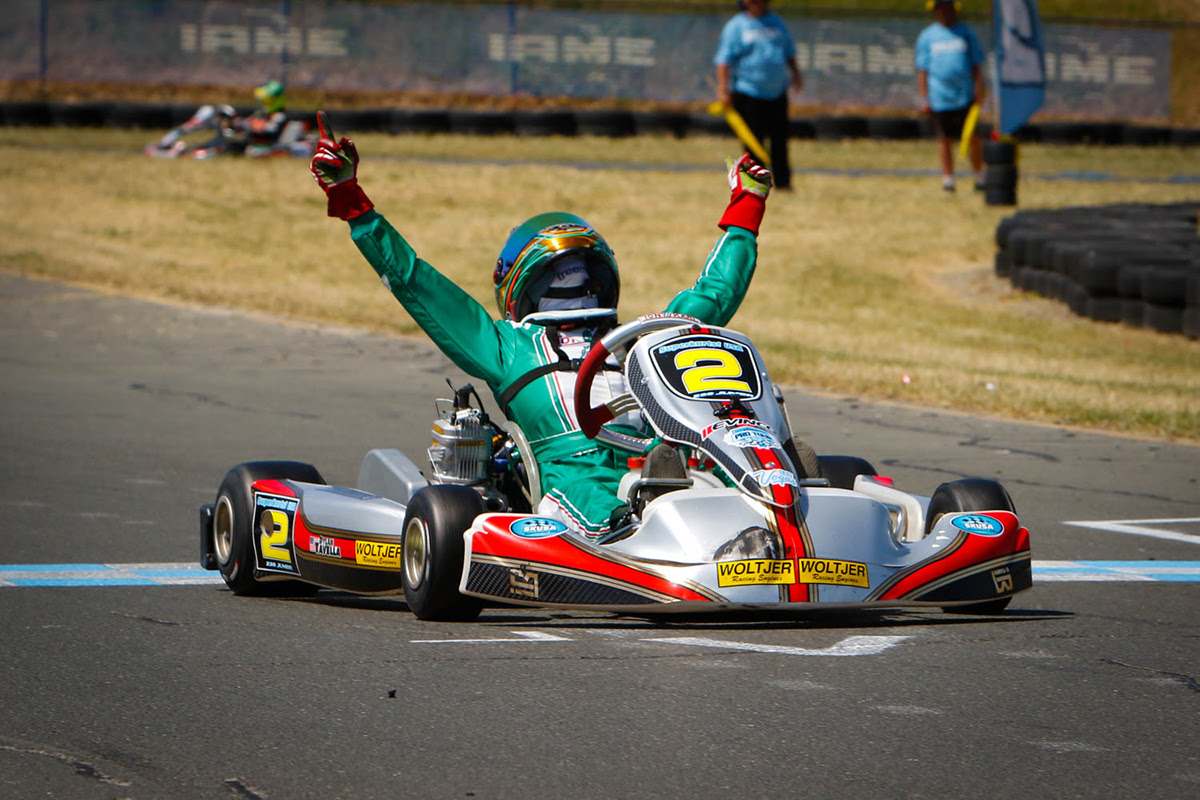 “Tavella puts Tony Kart, Iron Rock Motorsports and Woltjer on the top step of the podium in California”
It was another weekend of SuperKarts! USA (SKUSA) competition and much of the same for New York’s Dylan Tavella as he added to his 2017 win total. Rebounding from a difficult main event on Saturday, the Tony Kart driver was able to stand atop the podium during Sunday’s competition and firmly put himself in the SKUSA Pro Tour Championship chase with one event weekend remaining.

With two practice days allowing for ample time to test engine and chassis setups, Tavella entered Saturday confident and ready to attack the 46 kart junior field. A solid qualifying effort would slot him inside row two for the start of the prefinal where he would run a consistent race and end it in the fourth position. Looking to continue his winning ways from New Orleans just eight weeks prior, Tavella would endure a difficult start and contact during the main event and end his day in 16th.


“Saturday was not the finish that I was looking for,” explained Tavella. “I fell pretty far back and to finish 16th was good to salvage some points. Sunday is a new day and I will be working hard to make sure I am at the front of the field.”

Sunday morning’s qualifying effort would be a carbon copy of Saturday as Tavella would end his session in the third position and solidify an inside row two starting position for the prefinal. Another consistent third place finish would put the Iron Rock Motorsports pilot close to the front of the field for Sunday’s main event start, as he looked to grab the lead early and run away from his X30 Junior counterparts.

Tavella continued, “The X30 Junior competition is never easy. On any given weekend there are ten or more drivers that can win and I just needed to put myself in the right position at the right time.”


Putting himself at the pointy end of the field is something that Tavella has come accustomed to and during Sunday’s final, he did just that. Battling wheel-to-wheel early in the event, the Woltjer Race Engines powered driver was able to hold the point in the final few circuits to add his second SKUSA Pro Tour victory of the season. With the win, Tavella will now enter rounds five and six as the X30 Junior Championship Point Leader and have the target placed firmly on his back heading into the final event weekend of the 2017 season.

The Tavella family would like to give a special thanks to Massapequa High School AMES Campus Staff for giving Dylan the support system needed to live his dreams. AMES Campus truly cares about Dylan’s education and his passion for racing. Dylan would also like to thank Luis Martinez and Charlie Swayne (Iron Rock Motorsports) for track support, and a big thanks to the Woltjer family for the great motor.

For more information on Dylan Tavella including news, profile, media and contact information, please visit him online at www.DylanTavella.com.