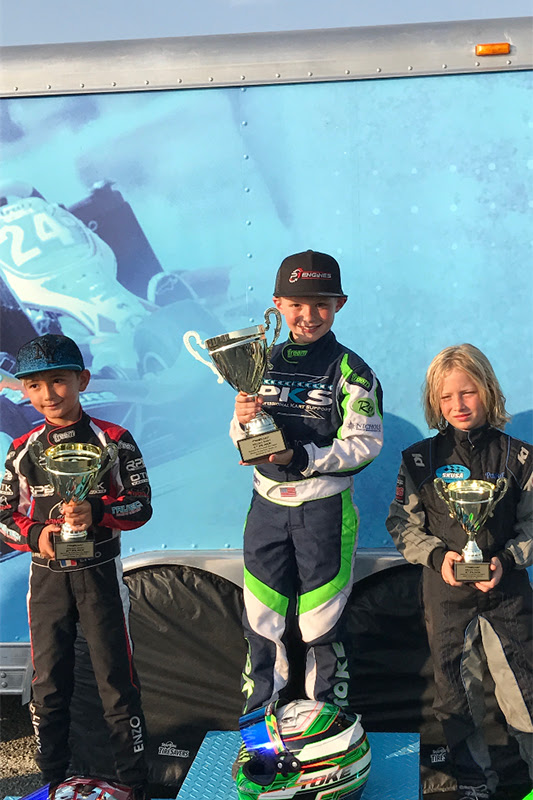 P1 Engines comes home victorious once again from round five of the SuperKarts! USA(SKUSA) Pro Kart Challenge in Monterey, California. The California based engine builder was able to provide front of the field power to many and was able to bring home a win, multiple top-five and top-ten finishes that spanned over five different classes.
Four P1 Engines drivers took the track in the X30 Senior class. After missing a full day of practice on Friday, Andrick Zeen hit the track for his first time ever on Saturday. He caught on quickly, posting a 12th place run in qualifying. He improved throughout both heat races, and landed himself a fourth place finish in the main. P1 teammates Carter Herrera, Colby Dubato, and Clayton Williams all earned spots inside the top-ten in the final, finishing seventh, eighth, and ninth, respectively.
In X30 Junior, Alan Tang, Oliver Calvo, and Tomas Mejia all battled inside the top-ten throughout the event. In the final, Tang would prevail between the three drivers with his best finish yet, coming home in the fourth spot.  Tomas earned a sixth place finish, followed by Calvo in seventh.
Logan Toke found himself at the front of the Micro Swift field in Saturday’s competition. The young pilot qualified in the second spot by one-hundredth of a second. He chased first place down in the first heat, taking the win in both heat races and earning the victory in the final. Fellow Micro Swift drivers Ethan Nascimento and Logan Chambers both showed great pace all weekend. Nascimento faced a bought of bad luck with DNFs in both heats, but worked his way back up in the main to finish sixth. Chambers proved he could run in the top-five with a fourth place heat race finish. He would later settle for a solid tenth place run in the final.
In Mini Swift, Daniel Inzunza put on another great showing, starting off race day with a third place qualifying effort. He earned a second and sixth place finishes in the heat races, and would jump two spots in the final to finish fourth. Nolan Siegel showed improvements all day, gaining three spots from his qualifying position to finish ninth in the main.
Two drivers flew the P1 engines flag in the X30 Masters category. Tim Meyer Jr. drove himself to a third place qualifying position, maintaining that spot in the two heat races. In the final, he brought home a solid fifth place finish. Aaron Farris finished fifth in both heat races, and followed his teammate across the finish line in the main event, finishing in the sixth spot.
Next up for the P1 Engines team is round eight of the Los Angeles Karting Championship (LAKC), followed by the Streets of Lancaster Grand Prix, the final round of the SKUSA California Pro Kart Challenge. P1 Engines will be offering engine rentals for the SKUSA SuperNationals, November 15-19, in Las Vegas. There are only a few rentals available for each class, and rentals are filling up quickly, so reserve your motor today.
For more information on P1 Engines or to book one of their national level engines for testing or event weekend use, please visit them online at www.P1Engines.com or contact P1 owner Jesus Vasquez at 909.948.2718 or via e-mail at Champions@P1Engines.com. Also, to follow up-to-date results and information on P1 Engines, become a fan of the “P1 Engines Fan Page” on Facebook.
tags: p1 engines
previous LOGAN TOKE CLOSES OUT SUMMER RACING SEASON
next Alex Irlando is the new International KZ2 Super Cup winner!