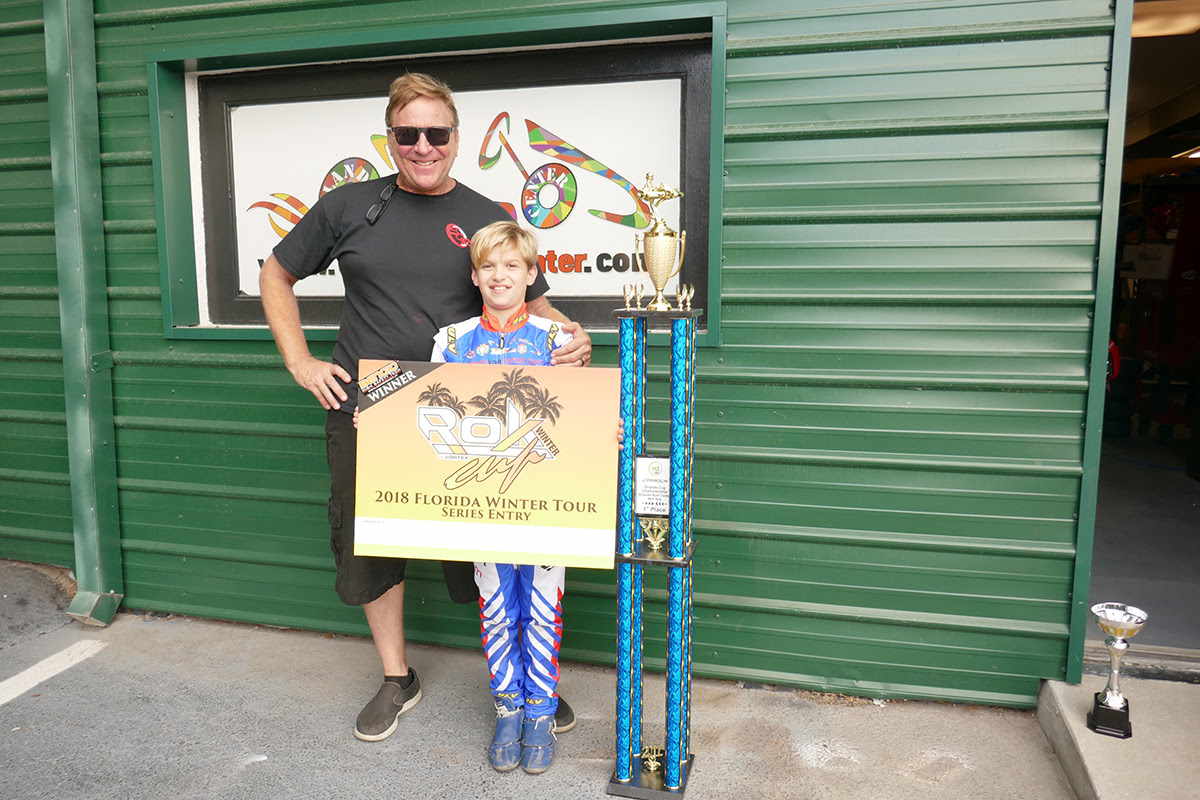 Taking place this past weekend at the Orlando Kart Center in Central Florida, Speed Concepts Racing (SCR) drivers once again were able to score race wins and podium results in another successful event. With the final round in the 2017 Orlando Cup on the schedule, SCR branded drivers claimed one win, three podiums and two awards for free entry to the ROK Cup Promotions Florida Winter Tour. Speed Concepts Racing will now shift their focus to the World Karting Association (WKA) Manufacturers Cup event in Daytona Beach, Florida set for December 28-30.
Entering only two drivers in the Vortex ROK Junior class this past weekend in Orlando, the duo was a force throughout the event and secured the top two steps of the podium. Tyler Gonzalez proved once again why he is one of the best junior drivers in the country as he and new SCR driver Arias Deukmedjian ended their event weekend with a first and second place result respectively. Along with the race win, Gonzalez was also rewarded with a free entry to the ROK Cup Promotions Florida Winter Tour.
Paul Bocuse and Alex Powell would fly the SCR flag in the Mini ROK ranks as both drivers would show their speed throughout the event. After the final checkered flag had flown, both drivers would cross the stripe in a podium position before a penalty moved Powell outside the top-five. When the results were finally made official, Bocuse would add another third place result to his resume and joined Gonzalez with a free entry for the Florida Winter Tour. With the post race penalty, Alex Powell would be relegated back to the seventh position and will now set his sights solely on winning in Daytona.
“Congratulations to all of the Speed Concepts Racing drivers,” expressed Mike Speed. “All four of our drivers deserved and should have been on the podium. The quartet impressed me again this weekend I feel that we may have one of the strongest group of drivers as we head into the new season.”
Taking little time off, Speed Concepts Racing will now begin preparation for the WKA Manufacturers Cup event at the end of the month. Taking place in the infield of the famed Daytona International Speedway, five drivers will attempt to start the 2018 season off with a victory.
In the IAME Junior division, Tyler Gonzalez will be back behind the wheel of a Speed Concepts Racing prepared chassis as he will be joined by Zane Maloney and Cody Krucker. In the IAME Mini Swift division, Calem Maloney, younger brother of Zane, will return for another battle while Alex Powell will put the penalty from this past weekend behind him as he aims for the top step of the podium in WKA competition.
Speed Concepts Racing drivers will hit the track December 28for practice before qualifying and wheel-to-wheel competition begins on December 29 and 30. Be sure to follow Speed Concepts Racing on Facebook, Twitter and Instagram for updates throughout the event, and a full race report to follow the event. Find them at ‘Speed Concepts Racing’ or @SCR_Karting.
tags: Alex Powell Cody Krucker orlando kart center Paul Bocuse ROK Cup USA SPEED CONCEPTS RACING Tyler Gonzalez WKA Zane Maloney
previous VEMMEKART USA SET TO COMPETE AT WKA MANUFACTURERS CUP IN DAYTONA
next CRG, GIANCARLO TININI’S ANALYSIS ON SEASON 2017