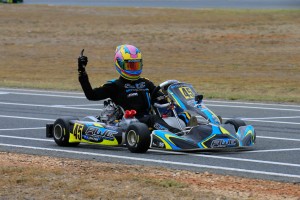 The opening round of the 2018 SP Tools Australian Kart Championship, presented by Castrol EDGE has created history through Lachlan Dalton becoming the first Tasmanian to win a round of the AKC and Aaron Cameron took the first KZ2 round win for JC Kart.

Dalton was dominant in the KA1 category at the Monarto Karting Complex on Sunday afternoon, taking victory by 1.6 seconds. Early race leader, local driver Joshua Denton survived several challenges throughout the course of the 20 lap race to bring it home in second, while Broc Feeney who started deep in the pack brought his Kosmic home in fourth position. Taylah Agius put in a strong drive to finish fourth.

Cameron had been the class of the KZ2 field since his mechanic William Yarwood rolled the JC Kart out of the truck for qualifying. After missing the start, he was leading heading into turn one and then staged a lights to flag clinic.

It was Cameron’s second KZ2 round win after winning the final round of 2016 and the first KZ2 round win for the kart brand launched by James Courtney three years ago. 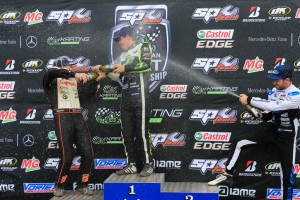 The battle for the minors in KZ2 raged all race long. Troy Loeskow quickly got himself into podium position, however his Ricciardo Kart team-mate, Dylan Drysdale wanted to be the Patrizicorse team leader. Loeskow was having none of it though and hung tough and it proved to be the right move – last year’s opening round winner coming home second. Pierce Lehane started further back in the pack and had to charge forward – he set some blistering laptimes during the mid-sector of the race. Once the CRG Australia driver broke into the top five he sensed a podium, in the end getting past Drysdale for third with a handful of laps remaining.

Victorian, Valentino Astuti broke through for his maiden KA2 victory aboard his Mad Croc Kart supported by Visa. An early race battle developed between Astuti and Matthew Hillyer. Hillyer was facing a post race startline infringement penalty so set about building a lead, which he opened up until over three seconds at the drop of the chequers, however the 10 seconds that he received dropped him to 11th. 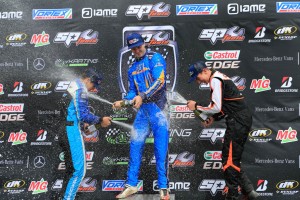 Australian TaG 125 Champion, Brendan Nelson got his Title defence off to a stunning start with a dominant win. He didn’t look like being challenged at one stage having the lead out over three seconds.

Cody Gillis’ first race since winning the Rotax DD2 World Final at the end of last year saw him take control of the Australian X30 Championship. The oversubscribed class was whittled down to the top 40 at the end of heat racing.

Gillis got to the lead of the IAME category – however would be shadowed right throughout the race by ZedCorse CompKart driver, Harrison Hoey. The Queenslander in his first AKC start as a Senior proved fast all weekend long and was rewarded with second. Cameron Longmore brought his TWM Arrow home in third position. After starting on pole he was shuffled back on the first lap and had to fight his way forward.

KA4 Junior again proved to be entertainment plus. It was an enthralling battle with numerous race leaders. Rhys Smith in his PCR started seventh on the grid, but it quickly appeared as though Smith would have the pace to challenge the front runners and that is exactly how it played out.

Eventually, the New South Welshman crossed the line first, winning by 4.174 seconds over CC Racing’s Nicholas Sacco and Kai Allen who scored two podiums from his two categories for the day. 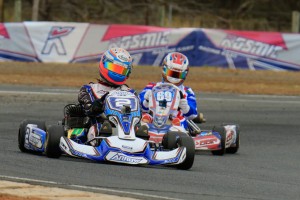 Matthew McLean got his quest to win a second Australian Championship underway with victory in KA3 Senior. McLean got to the front early after an early race fight with pole-sitter, defending Champion, James Sera.

Montalbano shadowed McLean and from the time he caught the Victorian, it appeared as though he was setting for a pass for the lead. Montalbano waited until the final lap to make his move and went for it on McLean, the pair colliding. Montalbano crossed the line first, however post-race was displaced one position.

Harry Arnett couldn’t have got a better start to his season in Cadet 12. With 58 competitors entering, it had to be brought down to 40 for the final. After cut and thrust heat racing, Arnett started on the second row and had to work his way forward. It was a thrilling battle between Arnett, Marcos Flack and Max Deguara – along with early race leader, South Australian – James Piszyck.

Arnett wasted little time in getting to the front but they were all stacked up behind. Deguara’s late race setup was outstanding and his kart really came on and he pushed through on Flack and set about chasing his fellow A1 Engines-powered driver, Arnett. The last lap saw Deguara close right up onto Arnett – the margin of victory for Harry was just 0.088 in the end.

The Victorian Anarchy Motorsport driver was thrilled with his performance in taking the win.

He had led on occasion throughout the race – as had five other drivers.

This elevated Ponting to the win and handed Filipino visitor, Griffin Peebles second. Peebles was one of two drivers from the Phillippines in Cadet 9 and that country one of six represented at this weekend’s opening round of the SP Tools Australian Kart Championship.

The battlelines have been drawn as we head to the second round of the Championship at Albury-Wodonga over the weekend of April 13-15.

The SP Tools Australian Kart Championship, presented by Castrol EDGE is stronger than ever.

For the full results from the weekend CLICK HERE.