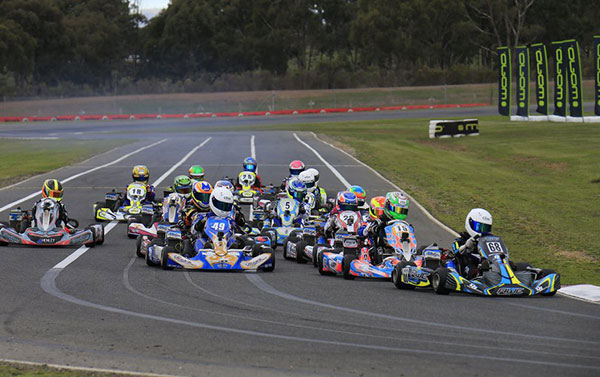 It was a sunny finals day here at Eastern Lions Kart Club for the Victorian State Championship round of the series.

In what shaped up to be an action packed day of racing for the “Super 6” event we saw some fresh faces to the podium and a mix up of the point standings as we approach the later stages of the calendar.

Super Sunday started with the fourth heat in what was slippery conditions for our youngest racers in the Micro Max category. The weather was on the side of our racers though as the skies cleared and finals were contested in what was the nicest day of the weekend.

For our 7 – 9 year old racers it was again a race with constant position changes and near misses. TWM pilot James Anagnostiadis drove away to an impressive one a half second lead early in the race but it wasn’t an easy drive to his first Rotax State Title. After a missed heat on Saturday and mixed results James had to bring his all on finals day in order to secure the coveted blue plate. Second place getter Jenson Burns found the pace he was missing throughout the weekend chasing down James as the laps counted down. The Zed Corse Driver went on to set the fasted lap of the race and narrow the gap to just four tenths of a second. Current series leader and two time State Title winner Jaxson Burns rounded out the podium ahead of team mate Isaac McNeill, local Sam March followed by Toby Musico and Marco Manson.

In Mini Max it was tough battle all weekend amongst the front runners but it was Formula K driver, Kristian Janev who leaves the weekend a newly crowned Victorian State Champion. The race to the chequered flag wasn’t made easy though with Praga pilot Kamal Mrad looking to take the top step of the podium. Rounding out the podium was Zed Corse driver Max Walton who despite some bad luck over the weekend managed to drive his way through to second place but was overcome by Kamal on the last lap. Aiva Anagnostiadis entered the weekend as series leader and after racing wheel to wheel with the leaders brought home her Energy Kart in fourth place ahead of Jake Rutkowski to round out the Top 5.

For our Junior Max competitors it was AWC Motorsport Academy who leave the weekend with their maiden Sparco Rotax Pro Tour with their maiden victory as a team. CC Racing backed, Hugh Barter qualified on pole on Saturday before taking a clean sweep of heats and the ultimate win on finals day over William Seal and Luke Pink. This win moves Barter to third in the championship points with just two rounds remaining for the year. Barter a once winner of the JR Memorial Award will have his eyes firmly set on a championship win and another ticket to the Rotax Max Challenge Grand Finals which will take place in Sarno, Italy late October. It was a tough weekend for the current points leader, Luke Pink. After suffering a back injury in an on track incident last week Pink struggled through the weekend with the main goal of maintaining his lead and keeping his mind set on the championship. “My closest competitor in the points is DR Kart Driver William Seal” – says Pink. The pair battled it out across the weekend, Pink crossed the line in first place for the final but was pushed to third after a drop down nose cone penalty.

It was an emotional and heartfelt win for Troy Farley Race Engines driver, Pierce Lehane who dedicated his win to Terence Becker, father or TF Race Engines Team Manager Lorraine Farley who sadly passed away this month. Lehane added the 2019 Victorian State Championship to his already impressive resume but it wasn’t easy for the Kosmic driver. DPE Kart Superstore backed Cody Gillis aboard his Arrow Kart struggled early in the weekend but found form at the later stages and the extra pace needed to battle with Lehane, “We need to find pace so we will turn this kart upside down to improve” said TWM Team Principal Tom Williamson, and that they did. Gillis finished the final in second and banked enough points to maintain the second spot in the championship. Brodie Whitmore also impressed across the weekend as did Tyler Howard who has found impeccable form in the 2019 season. With two rounds to go including the “Double Header – Double Points” round in Albury the top 3 in the Rotax Light category will go down to the wire. With just two RMCGF tickets on offer will we see our European Champion and World Champion mix it with the best Rotax Racers in Sarno or will the likes of Tyler Howard, Brodie Whitmore and Liam Ford take one of the coveted World Final Tickets.

He has been tough to beat all season, steering the St George Kart Centre backed CRG Kart and Lane Moore did it again. Moore took out the Victorian State Title over newcomer to the category, Troy Alger and veteran Rick Pringle. Moore now turns his focus to competing in Japan where he will compete in two rounds of the Rotax Max Challenge on July 13th and 14th driving for Eiko Co LTD Japan at the Mizunami Circuit. Both Lane and Dad Kerry Moore excited for the experience and to compete at the event. Keep an eye on our social media pages for updates across that weekend. AWC Motorsport Academy driver Benjamin Walter narrowly missed out on a completing the podium by just two tenths of a second. Usual front runners Chris Board and Ben McMellan didn’t have such luck in the final with McMellan crossing the line in eleventh and Board ended the weekend with a DNF. Moore has maintained his lead and increased the gap to 1894 points over Ben McMellan and Ben Walter.

The premier DD2 category currently holds some of the best Rotax racers Australia has to offer, already carrying the number one plate aboard his CompKart is Ryan Kennedy. Kennedy who leads the championship drove away in the final to finish two and a half seconds in front of Praga driver Jonathon Marcusson. Marcusson was charging his way through the final and fell short of laps. Marcusson set the quickest time of the race and remains second in the championship over Velocity Kart Shop – TopGun Driver Training pilot Cody Brewczynski who struggled over the weekend. It was the comeback anyone could hope for, poling qualifying and standing on the podium in third position – Tyler Greenbury has been out of the seat for some time but showed that he can still compete with Australia’s best and be competitive. Nikolaj Thomas also was impressive with his return to the category. Smooth, controlled driving say the Victorian set quick lap times and mix it with front runners all weekend, Thomas finished in fourth ahead of Racehaus backed Troy Morrissey.

Fraser Hart couldn’t have asked for a better end to his weekend becoming the newest DD2 Masters Victorian State Champion by 0.094 of a second over BirelArt driver Troy Bretherton. Bretherton who secured pole position after a last lap quick time had mixed results in the heats but found the form he needed when it counted and despite pulling a shoulder muscle early in the weekend was happy to step on the podium and secure enough championship points to maintain second in the championship. Kris Walton was another driver who struggled to find form over the weekend but after starting in eighth in the final had the start drivers can only hope for and was in second position before turn one. Walton was passed by Bretherton early in the race but knew he just needed to bring home his CompKart in order to maintain the championship lead. Danny Wright was closing in on Walton in the closing laps of the final but didn’t get close enough to round out the DD2 Masters Podium. Paul Rodgers made his return to the seat for the first time since Todd Road and was fast all weekend before unfortunately retiring out of the final. Scott Howard was in the box seat for the final off the front row but unfortunately could only bring his Kosmic Kart home in fifth. Terry Hanly moved up in the points and currently sits in third position with two rounds to go.

That wraps up the fourth round of the Sparco Rotax Pro Tour, we now move our focus to round five which will be held at Warwick Kart Club on August 9 – 11 the Pro Tour then rounds out the year with the Jason Richards Memorial “Double Header” in Albury on September 13 – 15. To all those who tuned in either via MyLaps or our Live Stream, we hope you enjoyed the coverage brought to you by our series sponsors: