WET WEATHER WAS NO DAMPNER ON HOT COMPETITION AT IDUBE 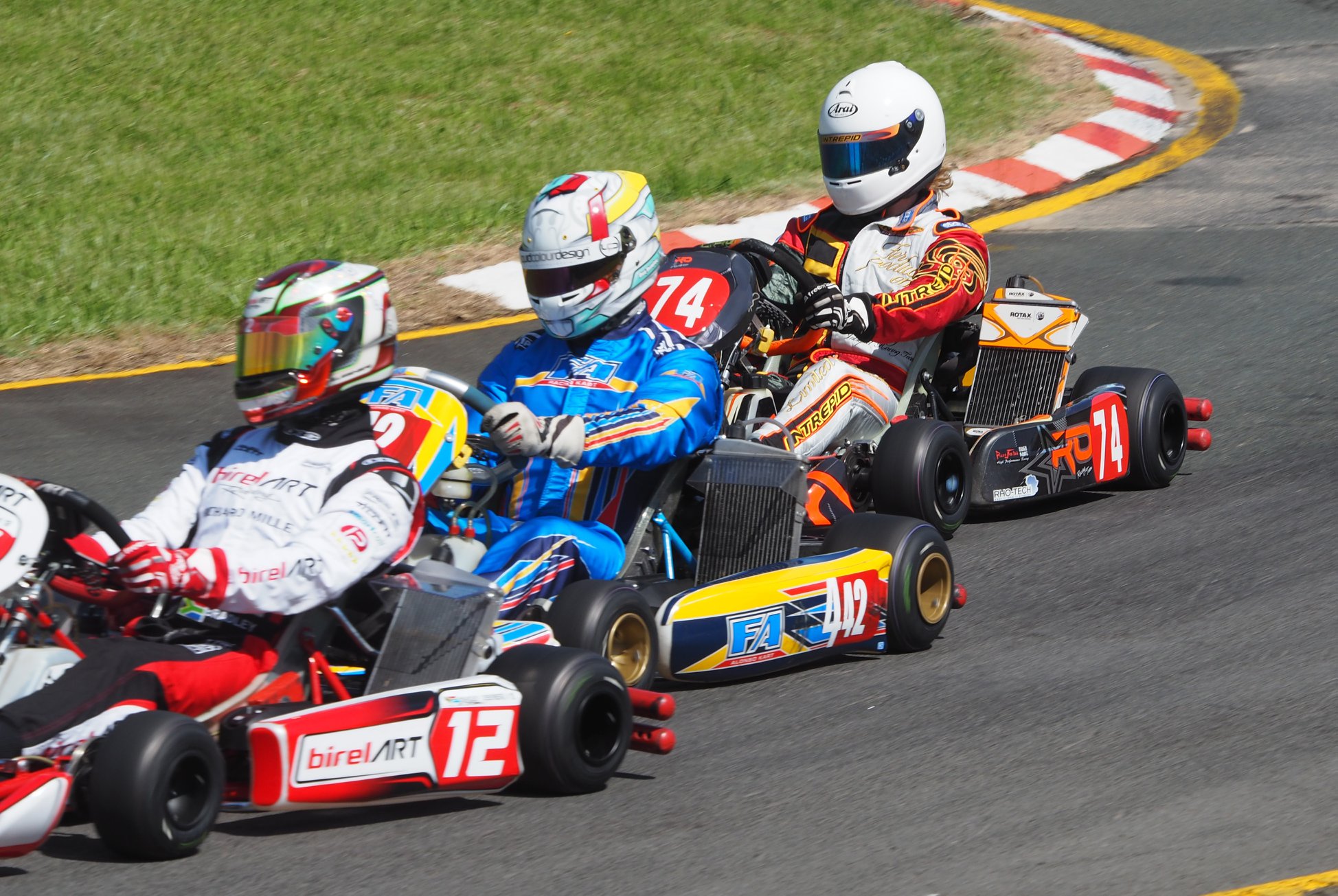 What should have been just a KZN Regional/Club Karting event, was more like a mini national with competitors travelling from Northern Regions and Western Cape to get in some practice before the Idube track closes for the 1st round of the SARMC National in two weeks’ time. But the KZN boys kept the banner flying high, by clinching five overall wins out of six for the day, with Charl Visser from Cape Town taking the Junior Max Class. The weather played havoc with tyre decisions during qualifying as unpredicted rain hung over the track for most of the morning.

The premier class of the series the DD2/DD2 Masters class did not disappoint. It was decision time and qualifying was a mix of wet weather tyres and slicks. The top five qualifiers all changed to slicks minutes before qualifying and this paid off. Habig set the fastest time ahead of Cristiano Morgado, Jonathan Pieterse, Bradley Liebenberg, Robert Whiting, Jurie Swart and Daniel Duminy. Heat 1 Habig took the lead but was chased down by Morgado in the DD2 Masters, who took the lead. Habig was ready to pounce back but misjudged his speed in hockey stick and clipped Morgado’s tyre causing him to spin and rejoin the race at the tail end. This incident caused some damage to the chassis and he battled with understeering in the remaining two heats. This opened the door for Jonathan Pieterse who moved into second spot with a hard charging Whiting on his tail who was fending off reigning DD2 champion Bradley Liebenberg. Cristiano drew 1st blood, with Pieterse 2nd, followed by Whiting, Liebenberg and Duminy. Robert Whiting set a good pace, and even though he finished 3rd in the heat, he secured the fastest lap time giving him pole for Heat 2. Heat 2 multiple World Champion Morgado took the win with Whiting in 2nd, Pieterse in 3rd and Jason Coetzee in 4th. They were following by Duminy in 5th and Habig in 6th. Ivana Cetinich also had a bad day at the office, and her best result for the day was in Heat 2 where she finished in 7th. Morgado pipped Pieterse in the final heat of the day, with Whiting finishing 3rd, Duminy 4th, and the two Capetonians, Swart and Coetzee in 5th and 6th with Habig in 7th. This was enough to give Morgado overall honours in the DD2 Masters, with Pieterse in 2nd, Richard van Heerde in 3rd and Alister Mingay in 4th. DD2 champion of the day was Robert Whiting, with Duminy in 2nd, Coetzee in 3rd, Swart in 4th, Habig in 5th, Liebenberg in a very unfamiliar 6th spot. Making up the top ten was Clinton Bezuidenhout, Ivana Cetinich, Ryan Wilde and Cody Sherrat.

Doing double duty today, Morgado, Pieterse and Robert Whiting all competed in Senior Max which threw the cat among the pigeons. The experienced Morgado took all three wins, with visiting Capetonian Jason Coetzee clinching the 2nd spot in all 3 heats. Shrien Naidoo and Dominic Lincoln, the two KZN boys who normally fight for overall honours both had a difficult day, and the new tyres seem to be presenting problems all round, not only in this class. Shrien’s best result for the day was in Heat 3 where he finished in 3rd – a mere nose cone ahead of Dominic Lincoln with Whiting in 5th. Riley Horner and Brent Walden both had mixed results finishing lower down in the ranking order in all 3 heats. Pieterse had one 3rd place. Overall was Cristiano Morgado, followed by Jason Coetzee, Robert Whiting, Shrien Naidoo, Jonathan Pieterse, Dom Lincoln, Riley Horner and Brent Walden.

Mini Max drivers delivered the goods today, with Jordan Brooks winning three heats from three starts, but both Troy Snyman and Liam de Beer who have been gaining more and more experience at every race meeting finished a solid 2nd and 3rd respectively. In 4th overall was Fernandez Mikhail with Mandla Mlangeni in 5th, Josh le Roux in 6th . Kyle Visser was disqualified for taking out a fellow competitor after the chequered flag.

Troy Snyman was the overall winner in the new Micro Max class, taking two wins, beating Mohammed Wally and Reese Koorzen to the flag. Koorzen took Heat 3, and Wally had to be satisfied with two 2nd places and a 3rd. Reza Levy was 4th, Dhivyen Naidoo 5th. Completing the top ten were Liviwe, Rayn Asmal, Travis Mingay, Uzair Khan and KC Ensor-Smith. Although Snyman finished 5th in Heat 3, he still set the 2nd fastest time for the heat. Snyman’s Heat 2 win was by a margin of 1.316 and Heat 1 the difference between Snyman and Wally was only 0,160. This all bodes well for an exciting tussle at the National.

For the KZN competitors, although their results may not all have been what they had hoped for on the overall standings, they still scored maximum club and regional points as visitors do not score points at this level.

Last but not least were the little Cadets – the absolute grassroots of racing. Anesu Maphumulo won both heats, with Enzo Rujugiro in 2nd in Heat 1 and Dylan Watkins taking 2nd spot in Heat 1. O Despite the wet track these youngsters did extremely well keeping their machines on track.

All in all it was a great day at Idube, and with the 1st round of the 2018 Rotax SARMC due to take place in two weeks’ time, we can expect some great racing, a bumper crowd and hats off to the Committee who have worked so tirelessly to continuously improve the track and grow our membership. KZN Kart Club