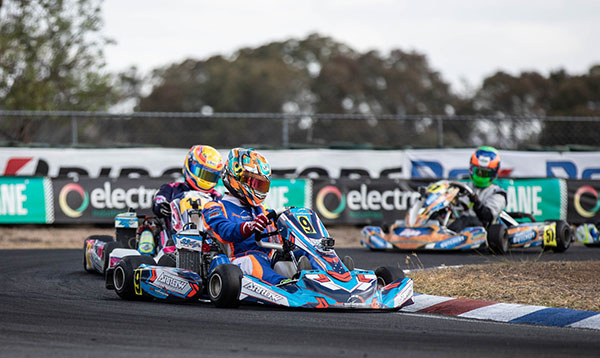 It was a windy weekend at the Sparco Rotax Pro Tour’s Warwick ‘Winter Cup’ but the Round five winners are now decided and with just one round to go the championship and the World Final tickets are going down to the wire.

For our youngest racers in Micro MAX, it was series leader Jaxson Burns who set the fastest qualifying lap but a very patient brother Jenson took full control of the opening two heats where he made a last lap move on the same corner twice to take the chequered flag in both the first and second heat races.

It was a battle right to the last lap in the final, in what was a heartbreaking end for Jenson Burns who again made a last lap pass on brother Jaxson before running wide, dropping a wheel and losing a chain on the last corner. Jaxson took the win ahead of team mate Isaac McNeill who has moved into second in the Series points and home in third was newcomer Basilio Micale who impressed on debut in the category and is showing promise to be a regular front runner. Warwick local, Toby Musico, just missed out on a podium spot while New Zealand-based driver Marco Manson rounded out the top 5 and had extremely impressive starts on the weekend where on more than one occasion was up to third by turn one.

Since earning himself a Rotax Max Challenge Grand Final (RMCGF) Ticket in Canada just weeks ago, Costa Toparis made his return to Australian racing in spectacular style, although it wasn’t made easy for the Goulburn third generation racer. Toparis took Mini MAX pole position in the early stages of the weekend but had to fend off series leader, Pro Karting entrant, Kristian Janev, Kamal Mrad and Max Walton throughout the weekend. Toparis took home the silverware ahead of Mrad and Walton who rounded out the podium. The championship currently stands with Kristian Janev, Aiva Anagnostiadis and Jake Rutkowski in the top 3.

In only her second ever appearance in the Rotax powered Mini Max category, Maddison Feather impressed from the very start. Having struggled for pace in Fridays unofficial practice sessions, the Electro Industries Team made some needed tweaks to her Parolin chassis and the young gun was fighting with regular front runners for pole position. Feather qualified in P5 and consistently finished inside the Top 10 for the remainder of the weekend.

Since making his debut to Junior Max at Todd Road in January, Canberra based driver Sebastian Ruiz has been looking for a breakthrough pole position in qualifying and on Saturday morning he ‘couldn’t be happier’. With his Dad and Uncle on standby at the grid, Ruiz had a smile from ear to ear when he learnt of his lap that set the benchmark for the weekend. ‘I don’t know what to say’ says Ruiz in a post qualifying interview with series commentator Scott Auld.

AWC Motorsport Driver Hugh Barter added to the trophy cabinet with another win for the year. Barter won the Warwick Winter Cup by an impressive 3.1 seconds over New Zealand entrant Clay Osborne and William Seal. Osborne impressed over the weekend and has officially moved up in the championship to fourth place which holds the third RMCGF ticket on offer with William Seal unable to attend this year. Osborne has his eyes firmly set on a World Final ticket and will be putting it all on the line at Albury’s ‘Double Header – Double Points’ Round in September. Jarrod Hughes narrowly missed out on a podium place while Luke Pink rounded out the Top 5 and retains his Series Lead going into the Grand Final Round.

In Rotax Light, with a European Champion who has almost been impossible to pass, it took the likes of DD2 World Champion Cody Gillis to get the job done. Out qualifying Pierce Lehane was the first step in an otherwise successful weekend for Gillis. Gillis, who started on pole for the Pre-Final, was unable to hold out Lehane who then went on to take his fifth win of the season over Gillis and Troy Farley Race Engines entrant, Tyler Howard. Brodie Whitmore remains third in the points after finishing in fifteenth position and will need to redeem himself at Albury with Howard just 645 points behind his fellow Sydney-sider. Liam Ford rounded out the Top 5 for the weekend.

In Rotax Heavy, CRG pilot Lane Moore entered as series favourite and leader but had his work cut out for him with the return of ‘TFR’ driver Regan Payne who won the Ipswich Round and the Queensland State Title two rounds ago. Moore admits he has struggled with qualifying this year but managed to set a lap time that was enough for pole position with Ben McMellan, Regan Payne and Shay Mayes completing the first two rows in the start of three heats. Zac Van Leeuwestyn didn’t have the weekend he was hoping for but has retained third in the championship.

‘The class is going from strength to strength, it’s a competitive field and it just keeps growing’ says Lane Moore in an interview. Drivers in the Rotax Heavy category are competing for a Rotax 125 Max Evo Engine, Lucky Design Helmet and IKD Voucher which will be decided at the conclusion of Round 6. Moore is looking to take back-to-back wins in the series and keep the coveted ‘Number 1’ plate on his kart.

Dominant Queenslanders shone through in DD2 in Warwick over the weekend with a podium lockout. Ryan Kennedy took the win over Tyler Greenbury with Taylah Agius rounding out the podium. Greenbury set the pace early on in the weekend when he qualified his Praga Kart on Pole. Team mate Jonathon Marcusson didn’t have much luck at the penultimate round of the series, an on-track incident saw Marcusson nursing his hand for the remainder of the race while trying to change gears and steer his way across the line for all important pre-final points. Despite his luck Marcusson still sits in second in the points and is 1462 behind leader, Ryan Kennedy. With double points on offer at Albury in a month’s time, Marcusson will be looking to redeem himself and take out the championship in his debut year in the gearbox class. Agius, who last raced DD2 at Ipswich in 2018, was setting quick times throughout the weekend and secured two thirds and a first in the heat races ultimately setting up her first DD2 podium.

The narrowest of gaps separate DD2 Masters series leader Kris Walton and Racehaus Driver Troy Bretherton, with just 508 points the difference with one round remaining. Bretherton has been consistent all year and despite not having won a round still holds second place in the championship behind Walton who has one round left to hold out the BirelArt pilot.

Fraser Hart set the pole and from then on he was tough to beat. The Kiwi set the fastest lap time in the final where he drove away to a 4.3 second win over Bretherton and Walton. Mat Stenner was a standout on the weekend in his Parolin Kart after missing the last round the Queenslander found an impressive return to form where he finished fourth with DPE Kart Superstore driver Scott Howard rounding out the top 5. Howard managed to surpass New South Welshman Terry Hanly in the points and move himself back into third position.

The season finale Double Header is set to shakeup the standings with double points on offer. With Championship status and RMCGF Tickets on the line we are looking forward to being track-side to watch the action unfold. The final round of the Sparco Rotax Pro Tour will take place at Albury Wodonga Kart Club on September 14-15.

As always, a big thank you to the Sparco Rotax Pro Tour Sponsors: