WOOLSTON, MOORE AND ROGERS LEAD THE WAY IN MELBOURNE 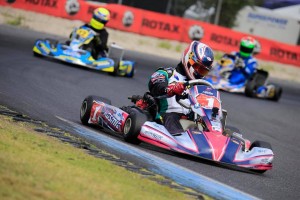 Woolston in his CC Racing Kosmic is having his first race meeting since becoming World Champion and is at the head of the highly competitive DD2 Masters field for drivers over the age of 32. The challenge is strong though. Praga’s Danny Wright signalled he was back after a difficult 2016 by setting the pole position in qualifying. Series debutante, Toby Pope has been among the top three throughout the day and the returning Jason Pringle, along with a rejuvenated Matthew Wall are keeping Woolston honest.

Gold Coaster Lane Moore has been working hard to return to this season in full physical fitness after a serious leg injury last year and it has paid dividends in Rotax Heavy. He’s spared little time in getting to the lead in all three races held today and has taken comfortable victories. Rotax Heavy’s surprise packet has been Newcastle’s Zac Van Leeuwestyn. After doing the majority of the Series last year, he will start on the outside front row for tomorrow’s Pre-Final and has proven to show plenty of speed in his CRG. Lucas Janev and Joseph Pasquale have both been among the front runners throughout the day also.

In Rotax Light – which had to be split into groups due to oversubscription – Joshua Rogers has proven to be the dominant force. After qualifying second, the Queenslander was locked on two victories apiece with Tom Williamson Motorsport driver Cameron Longmore ahead of their highly anticipated clash in the third round.

Benefitting from Praga Race Team Manager, Cash Van Belle being in Australia this weekend from Europe, Rogers got the third heat after a race long battle with Longmore. In the remaining heat, Cody Brewczynski took the win in his Velocity Kart Shop CompKart. Brodie Whitmore’s transition from Junior to Senior has proved to be a successful one, the Sydney-sider will start his Exprit kart from the second row of the grid in tomorrow’s Pre-Final. Wayne Bourke has been solid following his move to the Shamick Racing team, showing plenty of pace, so too Michael McCulloch, Leigh Nicolaou and Tyler Howard.

In DD2, Spanish driver Jorge Pescador is making a racing return in Australia for the Praga factory after a hip injury cut his 2017 short and has been impressive. He took the first two wins in the two speed direct drive category, however had the spark plug lead come adrift while comfortably leading the third heat. That opened the race up for regular DD2 frontrunner, Ryan Kennedy to cross the line first in his Formula K machine. Kennedy has been the best of the Aussies today, while Nikolaj Thomas has been super-impressive, so to Damian Ward – who returns to the Rotax Pro Tour aboard a JC Kart.

Junior Max has provided incredible entertainment with the mix of established Junior drivers and plucky upstarts graduating from the sub-Junior categories.

Team Australia representative from the Portugal Rotax Max Challenge World Grand Finals, Jaiden Pope is starting the season in strong form recording two victories and a second placing. Withstanding all sorts of pressure from around him, Pope has secured the pole position in his TWM Kosmic for tomorrow’s Pre-Final.

Last year’s Mini Max standout, James Wharton has hit the Junior scene with a bang, taking the only heat race from Pope and ending the rest of the weekend with a second and third placed finish.

The battle at the front is incredibly tight with Jack Grambauer having a breakout weekend thus far, Jackson Rooney showing some tremendous form – so too William Seal and Kiwi Ryan Wood – who is starting to build momentum ahead of the finals.

Mini Max is developing into a fascinating battle between around six drivers in the category poised to take the battle to the line in tomorrow’s final.

Two races today were taken out by Goulburn (NSW) resident, Costa Toparis. Toparis – who is having his first race meeting in the Mini Max field – took a resounding victory in the first heat, only to back that up in heat number two after a frantic finish.

Kristian Janev won the third heat and has been right at the front throughout, his move to a Formula K chassis this season proving fruitful thus far.

Queenslander, Ethan Feather took a trio of second places in his first Mini Max attempt – his most impressive drive coming in heat two after an off-track excursion at turn one placed him at the rear of the field. After a full course caution, he fought his way to the front at the drop of the chequers. Others among the top group include Carter Mobbs and Cody Maynes-Rutty – all of whom are well in the mix come the 18 lap final.

Jake Rutkowski has started his weekend in Micro Max with two heat race wins. Rutkowski – who finished second in last year’s Series – qualified on the outside front row, however struck trouble in the opening race and didn’t finish.

Pole-sitter, Peter Bouzinelos went on to win the first heat – however the victory celebrations were short-lived – he was the one suffering a drama in heat two while leading, handing the win to Rutkowski. Bouzinelos would finish the third heat in second placing.

The battle between the Burns brothers – Jaxson and Jenson – has been fascinating to watch with their ZCorse CompKart team-mate Max Walton also in the mix. The decision fell the way of Jaxson at the end of day’s play finishing in front of his brother on two of three occasions.

Tomorrow, racing will commence once again at 8am with the Pre-Finals – before Finals take place at 10:15am.

Entry to the Todd Road Karting Complex – just off the Westgate Bridge – is free to the public.