YOUNG MOTORSPORT TALENTS RACING IN TO THE FUTURE 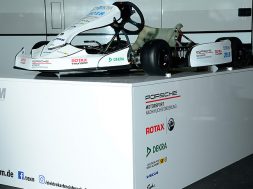 YOUNG MOTORSPORT TALENTS RACING IN TO THE FUTURE

Within the framework of the German Kart-Championship (DKM) an important step into the future will be made in the racing season 2018: the first German E-Kart-Championship (DEKM) marks a milestone in the development of racing sport when it comes to more sustainability and innovation. Five racing events between May and September 2018 will offer European junior racing talents the possibility to show their potential participating in a technically advanced and progressive championship, which so far is unique, as being the first of its kind worldwide.

Under the flag of the German Motor Sports Association (DMSB), the German E-Kart-Championship for young racing talents from age 15 will be held on the most modern race tracks in 2018.

Dr. Gerd Ennser, member of the DMSB’s Executive Committee for Automobile Sport: “Electric powertrains are becoming increasingly important in national as well as international motorsports. It was thus a logical consequence for the DMSB to create a series with e-karts for the youngest racing talents in order to prepare the next generation of racers for this future-oriented technology.”

“Within the FIA we aim to continue expanding alternative powertrains in motorsports. It is now in Germany, where the worldwide green light has been given for an electric future also in international young talent racing”, states Prof. Dr.-Ing. Burkhard Göschel, President of the Electric and New Energies Championships Commission.

Equal opportunities and performance in focus

Tyres, weight of the E-Karts and test days will be fixed before the races to ensure equal conditions for every driver and to establish a sustainable racing series. The high performance racing e-kart Rotax THUNDeR has a maximum acceleration from 0-100 km/h in 3.5. sec and reaches a top speed of 130 km/h. The Rotax THUNDeR consists of a Rotax ePowerpack, Sodi Sigma DD2 chassis and Vega tyres.

“BRP-Rotax is powering the best possible experience for drivers, particularly with our ingenious e-karts. Nothing dissuades you from your racing line – you can fully focus on the braking and steering point for the ultimate acceleration. This is real racing – modern and completely emissions-free. We are looking forward to cooperating with prestigious partners like FIA, Porsche and DMSB,” said Thomas Uhr, General Manager BRP-Rotax and Vice President Powertrain BRP and R&D /Operations Lynx.

The central fielding of all vehicles will create identical starting conditions for all young racing talents and will cushion any economic disadvantages in the cost intensive motorsports, thus putting the focus on the racing skills.

“We are pioneers in the field of electrified racing. The Porsche 911 GT3R hybrid and the 919 hybrid are very successful witnesses to this work”, says Dr. Frank-Steffen Walliser, head of motor sports at Porsche. “Thus it is only consequent to support young talent at the grass-roots level too. DEKM is a contemporary and future-oriented opportunity for us to do so.”

Porsche Motorsport is going to support the best driver of the German E-Kart-Championship throughout the following year with a number of training programs. “Supporting young talents has a long tradition at Porsche-Motorsport and has already produced a lot of professional race drivers and even several world champions. We therefore are very glad to also be able to pass our know-how onto the next generation of aspiring race talents”, adds Dr. Walliser.

The testing and certification organization DEKRA meets the technological challenges in all areas of mobility, which we will be facing to a vast extent in the future. These obviously include alternative drive concepts and their safe application both on the roads as well as on the racetracks. The project DEKM provides an excellent, innovative platform to on the one hand demonstrate and contribute the DEKRA-expertise when it comes to electromobile safety and on the other hand to make a contribution to supporting young talents in motorsports.

In addition to their engagement in the DTM as well as in the Formula E, the Deutsche Post, by having created the Speed Academy, is an institution when it comes to promoting young racing talents.

The Deutsche Post is going to invite the winners of the DEKM to an interview to present themselves to the jury of the Speed Academy. Drivers, like for example Pascal Wehrlein, Marco Wittmann, Daniel Abt and René Rast have gone through the versatile training program under the eyes of coaches and jurors like Timo Glock, Jens Marquardt, Norbert Haug und Kai Ebel.

The DEKM will be promoted by the experienced marketing and communications agency IKmedia from Schwaig near Nuremberg, who already have many years of experience in motorsports. CEO Oliver Schielein, being a former race driver himself, is very familiar with the requirements concerning karting: “Back to the roots”, said the marketing expert. “I drove my first races over 35 years ago in a kart myself- back then with a combustion engine, of course- and now I have the opportunity to take part in bringing the karting sport on its path in direction future with the first all-electric championship worldwide.”

RACE LIKE NEVER BEFORE: BRP-ROTAX LAUNCHES ITS FIRST E-KART POWERPACK: THE ROTAX THUNDER!

“We are proud to bring our first electric-powered product to the market. E-mobility is an evolving technology in the whole industry and is now part of BRP-Rotax’s growing product portfolio. The Rotax THUNDeR powerpack reflects our DNA: racing experience and always breaking new ground in our markets,” said Thomas Uhr, General Manager BRP-Rotax GmbH & Co KG and Vice President Powertrain BRP.

The Rotax THUNDeR powerpack is BRP-Rotax’s first step into this new technology. It is designed for use on common kart racing tracks and requires low maintenance as well as easy handling.

With its powerful e-Drive, the Rotax THUNDeR is a premium quality kart powertrain combined with the latest high-performance lithium-ion battery with a capacity of 2.5 kWh. With a top performance of 20 kW and 46 Nm, this innovative electric karting powerpack does not need to fear a comparison with
karts with combustion engines. It goes from 0 to 100 km/h in 3.5 seconds and has a top speed of 130 km/h.

The Rotax THUNDeR powerpack will be sold via the newly founded RIC TECH GmbH, a joint venture of SMRE Spa, a leading company specialized in the development of highly technological solutions within the field of electrical mobility, and BRP-Rotax GmbH & Co KG, a subsidiary of BRP and leader
in the production and development of engines for recreational vehicles. The Rotax THUNDeR powerpack will be available in the second quarter of 2018.

“After signing the joint venture agreement in June this year, the launch of the Rotax THUNDeR is the next stage in our successful relationship,” said Samuele Mazzini, CEO of SMRE. “Together we have an ambitious goal: lay the foundation for electric karting in a real racing environment.”