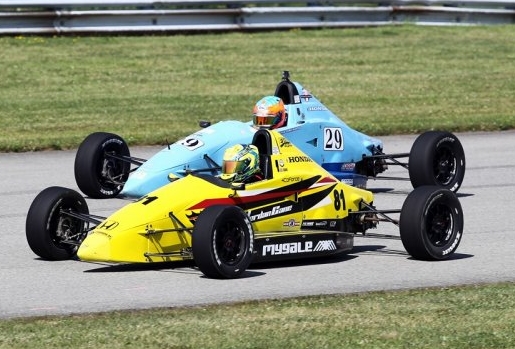 0
1   0
Jordan Cane was obliged to skip the opening few races of the F1600 Formula F Championship Series season because he didn’t meet the minimum age requirement of 14. Since celebrating his birthday in May, the youngster from Bognor Regis, England, has lost no time in making his presence felt for Team Pelfrey.
Cane claimed his first win last month at the Mid-Ohio Sports Car Course, in just his fourth series start, and went one better this past weekend at the newly extended Pittsburgh International Race Complex in Wampum, Pa., by guiding his #81 Mygale-Honda to a pair of accomplished victories.
It was a good weekend also for 17-year-old Ben Auriemma, from Manhasset, N.Y., who scored a trio of top-four finishes to move into second place in the point standings with six races remaining this season.
Team Pelfrey’s regular quartet established themselves as contenders for victory during the Friday test day with Cane posting the fastest time in the second session, just 0.031 second ahead of teammate Rob Megennis. Qualifying on Saturday didn’t quite go to plan with only one of the familiar yellow cars among the top five – Megennis leading the way with the third fastest time, followed by Cane in seventh, Andrew Hobbs 10th and Auriemma 12th – but the first of three races later in the afternoon saw a truer picture emerge as Cane and Auriemma joined in a four-car battle for the lead. Both took turns in front before being obliged to settle for third (Cane) and fourth at the finish. Hobbs, 21, from Milwaukee, Wis., fought his way through to fifth, while the unfortunate Megennis was involved in a three-car tangle after only five laps.
Four cars also distanced themselves from the pack in Race Two on Sunday morning, only this time it was Cane who came out on top by two-tenths of a second from teammate Auriemma. Saturday race winner Skylar Robinson and championship leader Scott Andrews also were in close attendance at the checkered flag. Hobbs finished sixth after a race-long battle with Thomas McGregor, while Megennis’ woes continued as the 15-year-old from New York, N.Y., suffered a mechanical failure resulting from damage caused in his accident the previous day.
Cane and Auriemma continued their impressive form in the third and final race of the weekend. Both took turns in the lead before a slip by Auriemma allowed Cane to break the draft and pull away to an emphatic victory. Megennis bounced back from his earlier difficulties with a fine third-place finish, narrowly edging out Auriemma, veteran Steve Bamford and Robinson as the four cars were blanketed by a mere 0.108 of a second!
Auriemma’s strong weekend moved him into sole possession of second in the points standings. Hobbs stands fourth and Megennis eighth, while Cane has vaulted from 15th to ninth, despite missing six races. The F1600 Formula F Championship Series will continue with another triple-header event, Rounds 16, 17 and 18, at New Jersey Motorsports Park in Millville, N.J., on August 29-30.

WHAT THE DRIVERS SAID:
Robert Megennis (#80 Team Pelfrey/Relayrides Mygale-Honda) – Race One, started third, finished 14th; Race Two, started 10th, finished 18th; Race Three, started ninth, finished third: “It was an up-and-down weekend. I was fast in practice and qualifying. However, being taken out in Race One and the associated mechanical failure in Race Two made me dig deep for the final race. I was thrilled to go from ninth to third and finish with a podium to end the weekend. Thanks to the team and the mechanics for all of their hard work and support this weekend.”
Jordan Cane (#81 Team Pelfrey/#2Bn1 Mygale-Honda) – Race One, started seventh, finished third; Race Two, started fourth, finished first; Race Three, started fourth, finished first: “What a weekend, I can’t really believe it! Two wins and a third! I led the first race on the last lap and thought I would win it but I wasn’t as clever as Skylar, and he and Scott drafted past me. I had to learn from that. The second race was an awesome battle from start to finish again I had the lead going in to the last lap but this time I held it! The third race at the start was a close battle again and I did drop back to seventh but I got to the front in a few laps and Ben, myself and Austin had opened up a gap. The middle of the race was a tight battle but I started to open up a gap, and the car just got better and better so I managed to open up a nice gap to the finish. So many thanks go to the team this weekend, it was just so awesome.”
Ben Auriemma (#82 Team Pelfrey/ACG Motorsports Mygale-Honda) – Race One, started 12th, finished fourth; Race Two, started second, finished second; Race Three, started second, finished fourth: “It’s been a weekend full of obstacles but I’m extremely happy with how I overcame all of them. The results may not show it but I performed the best this weekend that I have all year. We couldn’t have had worse luck with mechanical failures – rear sway bars breaking in consecutive sessions on Friday, then a braking system malfunction on Saturday, and to top it off a failure in the suspension killed a strong challenge for victory in Race Three. It’s nothing I can blame the team for, just heaps of bad luck. Again, I have to look at the positives, and there were a lot this weekend. I’m already ready for New Jersey, it can’t come soon enough.”
Andrew Hobbs (#83 Team Pelfrey/Pulse/Master Tech/David Hobbs Honda Mygale-Honda) – Race One, started 10th, finished fifth; Race Two, started fifth, finished sixth; Race Three, started seventh, finished eighth: “Well, it was one of the hardest weekends in a race car I’ve had in a long time. I never felt like I got into a rhythm with the track and we definitely struggled to get the setup down all weekend. It was a character-building weekend and I will be analyzing everything to improve for New Jersey. I can’t thank my team enough for all their support, they always have my back and work incredibly hard to keep getting better– we’ll be back strong for New Jersey.”
ABOUT TEAM PELFREY:
Dale Pelfrey’s race team, based in Palmetto, Fla., is built upon the same principles he used more than 35 years ago when establishing his business career – hire the best, acquire the best and expect the best in order to achieve the most. After fielding cars in the IndyCar Series from 1998 until 2000, Team Pelfrey was reformed in 2011, winning on its Pro Mazda debut and going on to earn the Team Championship as well as second and third in the drivers’ title-chase with Connor De Phillippi and Nick Andries. Team Pelfrey went one better in 2012, guiding Jack Hawksworth to the Drivers’ Championship and earning a second successive Team Championship. An expansion into the F1600 Championship Series for 2014 saw Ayla Agren, Garth Rickards and Augie Lerch secure the top three positions in the points table. The 2015 season also marks Team Pelfrey’s debut in the Cooper Tires USF2000 Championship Powered by Mazda.
next The Iceman to race for the red team again