STRAKKA RACING ONE-TWO AT THE NÜRBURGRING 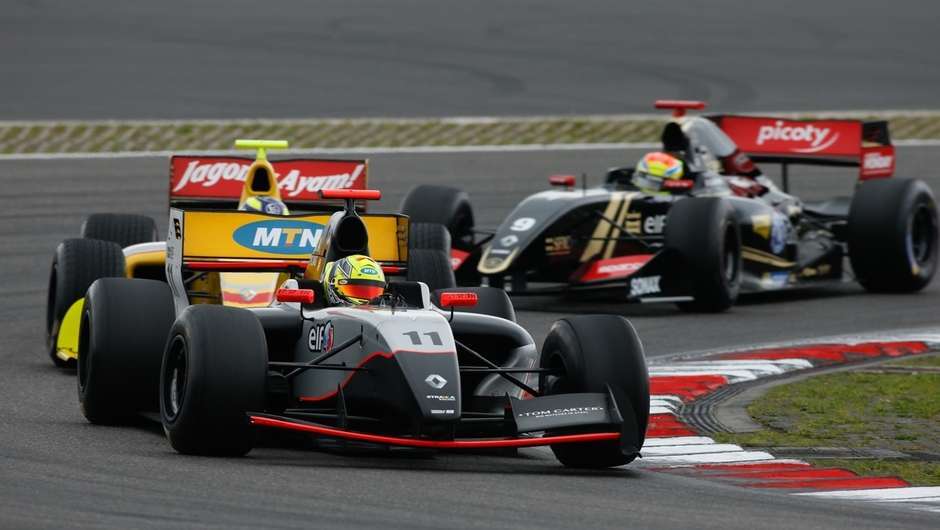 Unpredictable rain, a tyre gambles and virile passing moves summed up race two of the weekend for the Formula Renault 3.5 Series at the Nürburgring. Strakka Racing showed the others how it is done with Tio Ellinas notching his second triumph of the season, while rookie team mate Gustav Malja made it a one-two result. 2014 Eurocup Formula Renault 2.0 champion an member of the McLaren Young Driver Development Programme, Nyck de Vries (DAMS) completed the podium. In the race for the title, pole winner Oliver Rowland (Fortec Motorsports) salvaged the final point on offer, finishing ahead of championship rival Matthieu Vaxiviere (Lotus).The Englishman leaves Germany with a 50-point lead.

Fantin pulls away from an intense field


The majority of the drivers went with slick tyres for the start on what was a slightly damp track surface, with one notable exception in Nyck de Vries and most of those lined up on the second half of the grid. In what was an unbelievable start to the race, Oliver Rowland’s spin allowed Pietro Fantin to lead the way ahead of 10th on the grid, Aurélien Panis (Tech 1 Racing), and Tom Dillmann (Jagonya Ayam with Carlin). Tio Ellinas and Egor Orudzhev (Arden Motorsport) followed close behind in a field where positions changed at each corner and where the slicks were the right call.

The safety car and rain changed everything

On lap four, Pietro Fantin had a more than 10-second lead. Aurélien Panis was overtaken by Matthieu Vaxiviere, Tio Ellinas and Oliver Rowland – already back with the leaders -, before going straight off the track after the pit stop window had opened. The safety car was called into service, forcing those who had not yet made their stop to build as a big a gap as possible at the re-start.


Despite the window remaining open just until lap 18, their efforts were in vain. First to come in, Tio Ellinas came out with the lead, but then the rain changed things. After the attack of Gustav Malja, the Cypriot re-took the advantage from his team mate to go on for the win. Running in third place for a majority of the race, Egor Orudzhev went wide coming out of a corner and finished behind Nyck de Vries and Alfonso Celis (AVF), Pietro Fantin was penalized for not respecting the pit window and dropped to ninth. Dean Stoneman (DAMS) finished sixth, ahead of Marlon Stockinger (Lotus) and Renè Binder (Pons Racing). Oliver Rowland (Fortec Motorsports), who overtook Matthieu Vaxiviere on the final lap, picked up the one point for tenth place.

Tio Ellinas: ““Before the race, we tried to figure out which tyres to start on. As the leaders chose slicks, we just went with the pack. From fifth on the grid, I got a good start, but Roy Nissany broke my wing when I tried to pass him. I had to stop and I lost more time as Gustav came out ahead of me one lap later. At the re-start, I pushed as much as I could and once I had the lead, I no longer had any reference points. Gustav surprised me but I answered back and then I just had to stay in front on the last lap.”

Gustav Malja: “It was a very exciting race as well as being the most intense of my career. It was a race where there was rain and where I had to use my instincts, while also batting with my team mate for the win. I tried everything, but I am still pleased with this second place.”

Nyck de Vries: “At the start, I thought rain tyres would be better, but I was wrong. I struggled a lot in the opening laps, but I managed to avoid problems and stay on the track. In the pits we switched to slicks and in spite of a few difficulties, I was able to move up the order. Then I had to pass Orudzhev, and it was very tricky with the rain late in the race. We were very lucky, but sometimes that is what you need!” 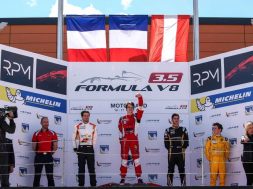 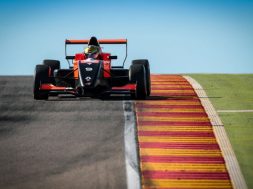