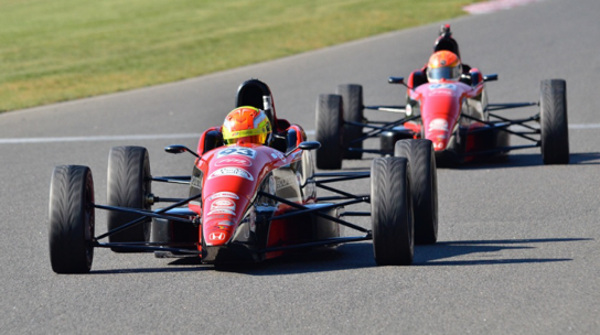 
Exclusive Autosport has created a development program specifically designed for karters transitioning from the kart ranks into open-wheel formula cars. A rigorous testing program, coupled with the team’s internal ladder system, are key components of the Exclusive Autosport development program. Kacic has inked a two-year deal with the team. 2017 will be spent testing and working very closely with team personnel to not only gain valuable seat time, but also to learn the inner workings of the team, the car and the dynamics between driver, engineer and other team members. Kacic will make his racing debut in 2018 with the team.

“I am super excited to start testing and working with the team,” said Marco Kacic. “I am confident that the Exclusive Autosport development program will help me make a successful transition to cars. I would like to take this opportunity to thank Jerry Kroll at Electra Meccanica, a Canadian electric car manufacturer, Percy Yuen from ORG racing suits, and Michael Duncalfe at Exclusive Autosport. Making this step in my racing career would not be possible without their support.”

In addition to his open-wheel development program, Marco will be racing a karting schedule in 2017. He will be wearing the signature Exclusive Autosport red and black colors for 2017 on his karting livery and suit.


“I am really excited to start working with Marco in the Exclusive Autosport development program,” said team owner Michael Duncalfe. “I have been following his career for a number of years. He has been extremely impressive for such a young driver. I am looking forward to laying a solid foundation in an Exclusive Autosport Spectrum Honda F1600 this year as we prepare him to make his racing debut next year. The EA development program provides a unique opportunity to not only gain crucial knowledge and seat time in an open-wheel car, but also be an active part of the Exclusive Autosport team. Marco will travel with the team to high profile races, be a part of debriefs with team engineers and drivers as well as have the ability to host their sponsors and partners.”